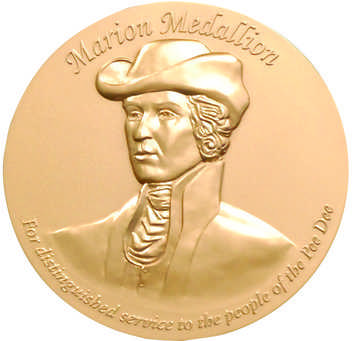 FMU and the Florence Morning News honor four community members with the Marion Medallion on Feb. 27 at the Performing Arts Center.

The Medallion recognizes members of the community for their contributions and service to the people of the Pee Dee region. It was first awarded in 2012, and FMU and the Morning News intend to award citizens for years to come. FMU’s president, Dr. Fred Carter, is a part of the group that selects the Marion Medallion recipients.

The Kirbys are educators and have given financially to local universities and schools for decades so that others may have the opportunity to receive an education. John Kirby has been the superintendent of the Latta School District since 1990. Vicky Kirby is an educator in the same school system.

“The Kirbys have devoted their entire adult lives to making contributions to education and helping men and women reach their goals of a better education,” Carter said.

Alexander and Strickland are the founders of Camp RAE, which is a camp for children with non-mobile disabilities. The camp has been open since the spring of 2009 and was inspired after Strickland’s daughter, Allie, who has quadriplegic cerebral palsy, attended a similar camp in Charleston.

Camp RAE provides comprehensive education and rehabilitation for children from the Pee Dee who have multiple disabilities. The camp allows them to interact with other children and helps suppliment programs provided for them during the school year.

“Deana and Paige devoted countless hours on behalf of children with profound disabilities in an effort to make their lives more enjoyable,” Carter said. “The two women began with a dream and the determination to make sure that dream was realized.”

Executives from FMU and the Morning News select the award winners each year and present them with a gold-plated bronze medallion during an awards ceremony on Francis Marion Day, which is Feb. 27. The medallion has a likeness of Francis Marion on one side and the recipient’s name engraved on the other.

The criterion for recipients is intentionally broad. Recipients must have made a significant contribution to the well being of the citizens in one or more of the counties in the Pee Dee.

“The four recipients are precisely what we envisioned when we created the medal,” Carter said. “For all the folks that have received the award, I don’t think we’ve missed yet. We wanted to [choose recipients] the public would look at and say ‘That’s who should receive that award.’”

The Medallion award stems from a report made in 2009 about the struggles faced by communities along Interstate 95 in South Carolina. One suggestion from the report was that major entities in the area find ways to recognize and award citizens for their work in the community.