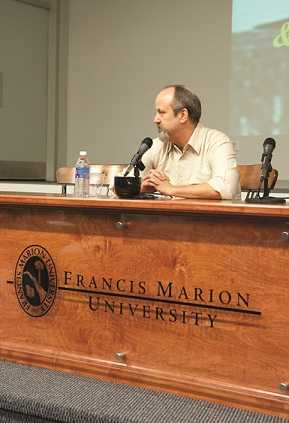 Students and professors from FMU said that the Pee Dee Fiction and Poetry Festival held on Thursday, Nov. 10 and Friday, Nov. 11 was educational and successful.

This year’s edition of the Pee Dee Fiction and Poetry Festival was the sixth time FMU has sponsored the event. The festival and the university played host to celebrated authors and poets Patricia Smith, Daniel Woodrell, Amy Bloom and Michael Chitwood.

Dr. Jo Angela Edwins, associate professor of English and co-director of the festival, said that she was pleased with the planning and operation of the event. She also said the educational aspect of the festival was apparent.

“It ran very smoothly,” Edwins said. “The best opportunity is [students] get to hear some stories about how writers who do this for a living work, and they get to hear the work out loud from the writers’ own voices.”

Alexis Johnson, a junior majoring in English – liberal arts, said that she enjoyed the events she was able to attend and the opportunity to meet one of the authors.

“This was my first time going, and I was excited,” Johnson said. “I actually got to talk to Daniel Woodrell. He started chatting with me and was super open and friendly. It was very enriching to see an author that you’ve discussed in person.”

Over the course of the two-day event, the authors and poets participated in panel discussions, book readings and signings, and made appearances at receptions held at the end of both days at The Cottage.

Dr. Pamela Rooks, Professor of English and Director of the Honors Program, moderated the panels. Rooks offered questions to the authors and accepted inquiries from students and faculty during the panels.

“I was pleased with the fact that so many students asked questions,” Rooks said.

During the panel session that Daniel Woodrell and Michael Chitwood parti-cipated in together on Thursday, Nov. 10, the two authors discussed their own personal writing processes.

Chitwood answered questions about his personal influences and how he incorporates those influences into his writing.

“I try to make a date with the page every day,” Chitwood said. “I think some young writers worry that somehow someone else’s voice is going to get into your voice or you’re going to plagiarize. But it’s not going to happen.”

Woodrell addressed the incorporation of imagery in his writings.

“I think the way that the landscape is described is like putting a baseline to what the human beings were up to or a score to it, in essence,” Woodrell said. “It’s a sort of restating the theme almost with a description of something natural that corresponds to the same emotions that [the readers] feel are in the air with the writing.”

The book and poetry readings were held on both days and gave students and faculty a chance to hear the authors and poets read their own work. Poet Patricia Smith said that performing poetry is actually how she  began writing.

“I got introduced to poetry by getting up on stage and performing,” Smith said. “It’s important how the poem reaches the audience.”

Lisa Stuchell, an instructor of English, said that some of her students saw Smith reading her poetry in class before the festival. Stuchell said that she felt her students were excited to have the opportunity to see Smith in person.

“I had them watch Patricia Smith read her poems on YouTube,” Stuchell said.  “I think it opened [the students’] eyes to different types of writing and different authors.”

During the festival, “Snow Island Review,” FMU’s student literary journal, hosted readings by students recently selected for publication in the next issue.

Janet Gray, a senior majoring in English and SIR member, read an excerpt from a poem that she had written as a parody on vampires in the media.

“Part of me really wanted to do it, and part of me didn’t because I’m kind of shy when it comes to public speaking,” Gray said. “I told myself,‘Just to read it like you hear it in your head.’ It was really fun.”