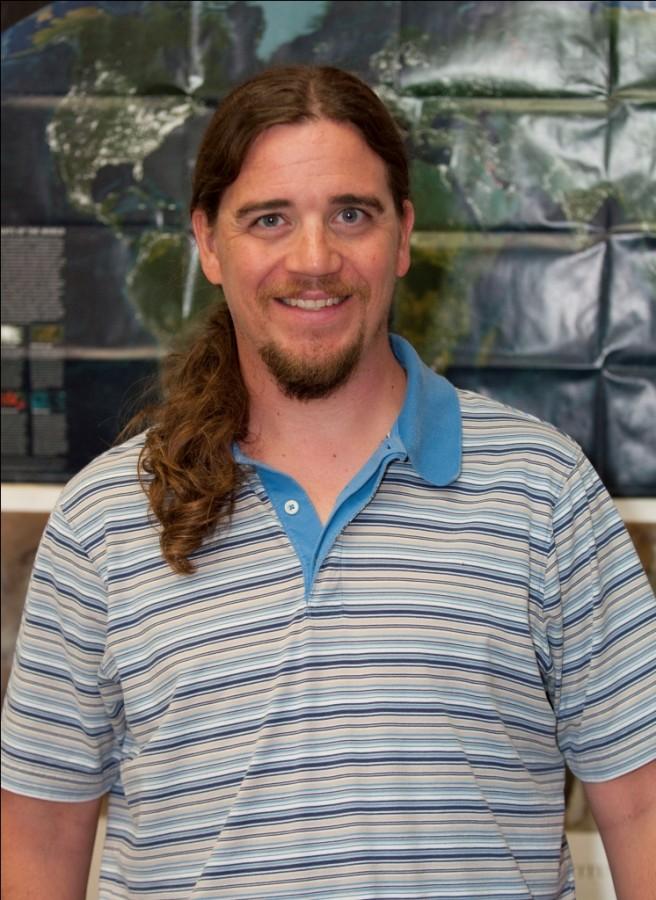 Turner’s students like his personality and his teaching style. Some of his students also like his looks.

According to an anonymous student source, Turner’s good looks inspire students to enroll and pay attention in his classes. His hair, according to the source, worn long and in a ponytail, combines with his looks and personality to make him a sex symbol. Turner grinned when asked how he felt about being a sex symbol, but said he did not see himself that way.

“It flatters me that I have been asked,” Turner said. “That strokes my ego. There are various ways that I see myself, but a sex symbol is not one of them.”

He is happy with his hair, and has no plans to cut it in the foreseeable future, but he would not have a problem cutting it.
“If there was ever a point where I got tired of it, yeah. I like where it’s at now,” Turner said.

Turner was not always a sex symbol at FMU. He traces his academic roots back to the University of Michigan, where he graduated with a bachelor’s degree in general studies. Unsure initially which path to follow in undergrad, Turner took classes in a wide variety of disciplines. He took classes in German, the sciences and whatever else interested him. His first undergraduate encounter with philosophy left much to be desired.

“Finally, about my junior year, I realized that I could get a general studies degree, which allowed me to keep doing what I was doing,” Turner said. “I still didn’t know what I was doing with my life, but I felt that I was at an institution where there were a lot of opportunities and a lot of knowledge to explore.”

It was during a chance visit to a bookstore that Turner was reintroduced to philosophy.

“I was in the philosophy section, and I happened to pick up a book by Kierkegaard,” Turner said. “The book was called ‘Either/Or,’ by Søren Kierkegaard. What I would read was something I had never been exposed to before. It was that book about philosophy, and that way of thinking about philosophy, that pulled me back in.”

Turner was unsure what he wanted to do after college, and worked a retail job in Ann Harbor, MI. It was there in Ann Harbor that he met his future wife, Dr. Loraine S. Turner, part-time instructor of biology – also at FMU.

“We started dating then,” Turner said. “She was planning on moving to California that summer, and I decided to go with her.”

Turner began thinking about graduate school while he was in California, after his wife – then girlfriend – decided to pursue a graduate degree in biology. He was unsure which field he wanted to study, but decided that philosophy was the only discipline that allowed him to continue academically in the direction that he was already headed.

“Instead of thinking, ‘what can I do with this very general degree of mine,’ I thought about what fields were out there that embraced that kind of generality,” Turner said. “That’s how I ultimately decided on philosophy.”

Both Turners attended the same graduate school, Temple University. He headed straight for the doctoral track and earned his Ph.D. in philosophy.

After graduating, Turner interviewed out of state for a position at FMU in December of 2005, with Von Frank and Blackwell. Turner visited FMU in February of 2006, and shortly afterward he accepted a job offer with the university, even over an offer from another campus.

On the level of practicality, Turner could not turn down a tenure-track job.

“If you get a tenure-track job, you’ve got to go,” Turner said. “In my field, the job market is horrendous.”

It was a unique air of friendliness at FMU, however, that won over Turner.

“I’ve got to tell you – when I came down here, I didn’t have problems talking with anybody,” Turner said. “I began to realize that there was a social dynamic at this institution that was not a part of other institutions. I was very lucky that it worked out the way it did.”

Turner also enjoys teaching at FMU with his wife. While some might see that as something to deal with, Turner finds it perfectly natural. He is very glad to have his wife as a colleague.

He does not claim to share any of his wife’s hobbies, nor does he profess to have any of his own. However, Turner does confess a long-term goal. He wants to build a theramin, a musical instrument that does not use strings or percussion to generate sound, but instead reads hand gestures.

From sex symbol to philosopher, just what makes Turner, Turner?