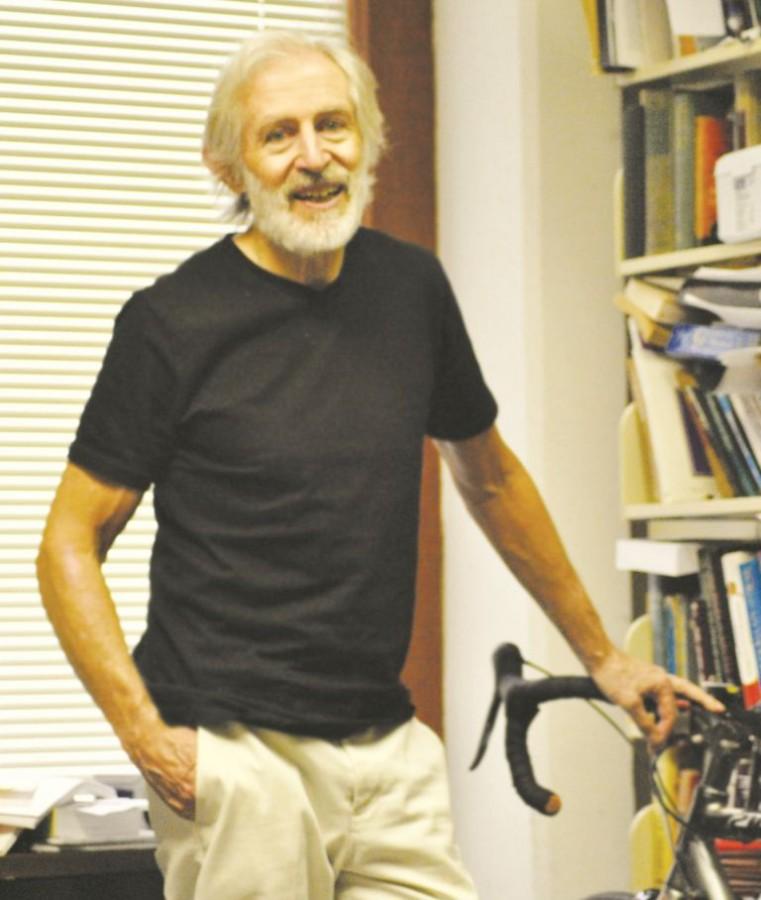 Linguist, storyteller, teacher and world traveler are few of the many recognizable names that Professor of English Dr. Peter T. Whelan is popularly known by. Originally from Gloucestershire, England, Dr. Whelan has brought to Francis Marion an exceptional perspective on connecting literature with culture into his teaching.

Whelan regularly teaches courses on mythology and world literature, along with introductory English courses at FMU.

Whelan’s spark for teaching was ignited while he was holding a position in the army office.

“I discovered fairly early on that I didn’t like being an army officer,” Whelan said. “I immediately decided to teach English as a foreign language.”

As an undergraduate student, Whelan was educated in modern Arabic studies, Russian and later on taught geography and culture while in the Middle East.

Whelan’s travel to Barcelona, Spain, during his early twenties was a novelty in itself because of the beauty of the land and his eagerness to learn.

“I spent four or five years in Spain and it was there where I learned to speak Spanish,” Whelan said. “It was rewarding, and I discovered things like classical music, arts, literature: all the finer things in life.”

Whelan was at first overwhelmed by the idea that he was supposed to teach dialectology while in Spain, but he enjoyed the experience nonetheless.

“My six weeks of teaching in a girls’ high school in Barcelona was such a wonderful experience,” Whelan said.

Whelan said that one of his favorite places is Spain because of the scenic value and beauty.

Whelan holds Europe close to his heart because of his original roots. He tries to make frequent visits to stay in touch with his European roots.

“The roots of my culture go deeper down there in Europe than here,” Whelan said. “It’s still refreshing to go and visit a Cathedral. It’s nice to go a place where I can nourish that part of me.”

Whelan said that the aesthetic beauty of European landscapes is breathtaking and that there are wider horizons.

“Tuscany is a place where the landscape is extremely harmonious,” Whelan said. “Everything is three dimensional, and not two dimensional.”

Whelan, having a voracious appetite to travel the world and indulge in historic explorations, finds not much hindrance when it comes to language.

“Because I’m a linguist, I can make do with a small amount of knowledge about a language to communicate,” Whelan said. “I can read Italian, but, never spoke Italian. A group called on me when an interpreter was needed. When I went to Italy, I was an interpreter without knowing Italian.”

Some of the languages that Whelan is acquainted with and can communicate in include Arabic, French, German, Italian, Latin, Old Occitan and Greek. He is also learning to read Hebrew. In his eighteen years at FMU he has taught Spanish classes as well.

Whelan’s love for world history has evolved to become so strong that it has extended beyond the confinement of the university walls and classrooms. He mentioned that his extensive traveling and intrigue in cultural diversity has tremendously helped him in teaching world history.

“I think teaching literature is a product of a culture,” Whelan said. “I communicate as much as I know.”

In his literature courses, Whelan enjoys teaching Dante’s “Inferno,” which is a fourteenth-century epic poem in his larger “Divine Comedy.”

Whelan’s interests and hobbies include bicycling and other athletic outdoor activities. He sometimes keeps a cycling journal.

“I love the feeling of intense physical effort; the feeling that makes your muscles burn because you are running out of glycogen,” Whelan said. “I’m a recreational rider, but, I’m still interested in being of the fast guys in a club.”

Regardless of the physical injuries that Whelan has seen, his spirit never seemed to be injured.

“I broke my collar bone a couple of years ago while I was riding my bicycle; if you see the helmet over the bookshelf, you’ll know how severe the fall was,” Whelan said. “My helmet crashed. But, soon after the accident, I was anxious to get back on the bike. I look after myself carefully.”
Whelan’s significant influences are his wife and his children because they have helped him grow in ways that he did not imagine. He learned new ways of seeing the world and learned to understand points of view through the eyes of his children.

“My wife of twenty five years made me a much better person – my kids too,” Whelan said. “I learned patience. Parents are very much educated by their children, and parenthood requires selflessness.”

Whelan said that the idea of traveling to other countries and experiencing other cultures requires one to understand what acceptance means.

“Adapting to a culture is a skill to acquire,” Whelan said. “Get past it and accept other cultures as they are, rather than constantly comparing it with your own; especially saying that your culture is better than the others.”

Whelan further emphasized that not all people share the same interests and beliefs.

“You just have to accept people the way they are and go along with it at least when you’re among them,” Whelan said.

The approach Whelan uses while he teaches is to encourage students to be critical thinkers.

“One of the fundamental facts about the liberal arts is that you have to think critically about every aspect,” Whelan said. “Face it and be brave about it. Critical thinking can lead you to uncomfortable places. It’s not my job to make students feel comfortable; it’s my job to make them think. Habits of critical thought can last a long time.”

Whelan mentioned that the curiosity that people once had as children should be reawakened and they should delight in thinking.

“Take away from a bachelor’s degree about how much you don’t know,” Whelan said. “This helps you realize how much more you have to learn in life.”