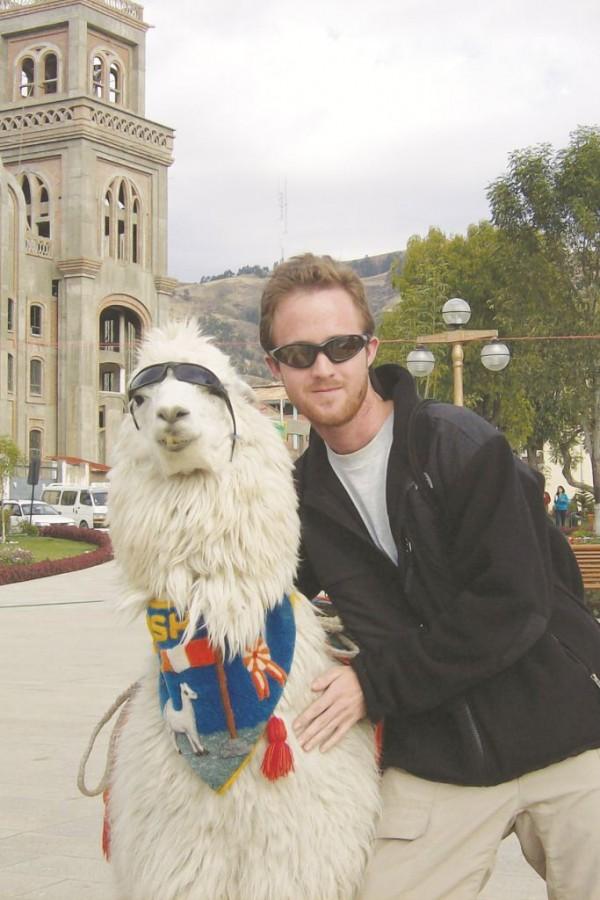 Recent Francis Marion graduate Sam McLellan spent this past summer in the jungle of South America, from June 1 to July 28. After earning a bachelor’s degree in history, he traveled to Peru as a member of a mission trip sponsored by the North American Mission Board and FMU’s Baptist Collegiate Ministry (BCM).

McLellan and the other group members were to travel the Amazon jungle, visiting local villages in order to learn population numbers, levels of education, various physical needs and where the evangelical church was present.

Three days before the group departed the United States, the itinerary was changed.

“I got an email that said, ‘pack a jacket, because you’re also going to be spending half your time in the Andes mountains,'” McLellan said. “That’s a shift – a fun shift, but a shift nonetheless.”

McLellan’s group flew from the United States to Lima, Peru, the city which would serve as their base of operations. Only a few days after their arrival, the group’s itinerary changed again. They were told to join a church group from SC and work in two villages of the Ashanikan tribe.

McLellan left with the group from Lima on a nine-hour bus ride to Mazamari. A river boat then took them six hours downstream to the Ashanikan villages. There they hosted and participated in a soccer tournament for two days. The villages, all without electricity, competed to win a power generator. It was the first time McLellan had ever played soccer.

“[It was a] wonderful experience,” McLellan said.

After two weeks with the Ashanikan tribe, McLellan returned to Lima just in time for the start of the 2010 World Cup. The group took time to relax, eat and watch the Cup, unable at the time to leave the city due to a mining strike. Miners between Lima and the group’s next destination, Cero de Pasco, prevented travel between the cities by throwing large rocks at passing cars. McLellan chuckled as he recalled the incident.

“Now, yes, the irony of the fact that during a mining strike the miners chose to move rocks into the road is not lost on me,” McLellan said.

The miner’s strike, however, did not prevent the group from being active. While in Lima, McLellan’s group was directed to spend the next week helping staff an International World Changers’ trip, an American mission group of 100 high school and college students. The groups left together and headed by horseback to Canta, Peru. McLellan had never ridden a horse before.

“If you can ride a horse through the Andes mountains, you’re having a good week,” McLellan said.

In Canta, McLellan taught English at a local school. The teacher at the school looked after several children who had been abandoned by their families. One girl at the school had been raised in a barn. She was given food by her parents at the barn and left with the animals. McLellan was moved by the children and the trials they suffered, especially the girl.

“It was a rough story,” McLellan said. “And those kids, they just break your heart to see. You can see the potential, and you can see the desire to learn, but at the same time there’s so much against them.”

The group returned to Lima at the end of the week, and then headed north to Yungay. There McLellan taught English again, this time at a church. He taught during the evening, and during the day he helped organize church services and Sunday school as well as painting the sanctuary. He also made his only attempt at Peruvian cooking.

“I learned one thing,” McLellan said. “It takes forever to make Peruvian food.”

The group stayed in Yungay for three weeks before returning to Lima. After regrouping in Lima, they then left for Iquitos, Peru. The first leg of the trip took them two hours by plane, the only alternative to a three-week boat trip to the otherwise unreachable city deep in the Amazon jungle.

Once their plane landed, they began their 10-hour-long boat ride up the Napo River to Santa Clotilde. There McLellan finally began the research his group was sent to gather. After renting a boat, the group traveled the area for five days and visited 20 villages. The heat was intense, but clouds gave them a reprieve for the last three days. The heat turned out to be a small problem, compared to the trip back.

Two hours north of Santa Clotilde on the return trip, their boat guide, Juan Carlos, declared there might not be enough gas to get back. The decision was made to buy an extra gallon of gas, and that extra gallon proved to be short of the mark. Carlos somehow managed to conserve the fuel long enough to get gas at another village, only to run out of fuel again just before reaching Santa Clotilde.

“We get in sight of Santa Clotilde, and we break down again,” McLellan said. “I was like, ‘really, twice in one day?’ And this time there was no getting that engine going again. We basically yanked the planks out of the bottom of the boat, and we start paddling. We ended up paddling the last 500 yards, with the guy in the front using his hands.”

Paddling was much preferred over swimming, because the water, approximately 30 feet deep at that point, was home to piranha and alligators.

Despite the obstacles encountered on the return voyage, the group was able to accomplish their mission of evangelism and research. The information gathered determined which goods and services were needed in each village, and that data will be used to improve the quality of life in villages over the next two years. McLellan also met a personal goal: having his picture taken with a llama.

“I did get a picture of me with a llama, which was probably my primary non-spiritual goal, due to my fondness for the llama,” McLellan said. “I really like llamas.”

McLellan demonstrated his fondness for llamas by making a hand gesture resembling the face of a llama.

McLellan arrived back in SC just in time to attend (and be a groomsman in) two different weddings on his first two days back.

In reflection, McLellan valued his experience, and would gladly do it again.

“Would I go back and do it again? Absolutely,” McLellan said. “It was definitely one of the great adventures. One of the greatest adventures of my life. And it was continuously God revealing new things, both in the world around us, and in himself. And I would not trade the experiences gained there for anything, and I would love to experience it again if the opportunity presents itself.”

Back in Florence, McLellan currently works for BCM as the semester missionary for FMU. He helps organize all BCM hosted events, including “153,” an event held each Tuesday night offering free food and opportunity to fellowship and worship. He also spends time on campus building relationships with students, giving them his time and assistance, friendship and sharing the gospel.

McLellan plans to continue working with the BCM for the next year. He is considering leaving after that to continue on to the next step in his life. He is leaning towards attending seminary.

In the meanwhile, McLellan is very excited about 153. He believes the event’s diversity will make everyone who wants to attend feel comfortable and welcome.

“We believe in doing everything we can to make the people of Francis Marion to feel as welcome as possible, and to demonstrate the love of Christ to them every chance we get.”