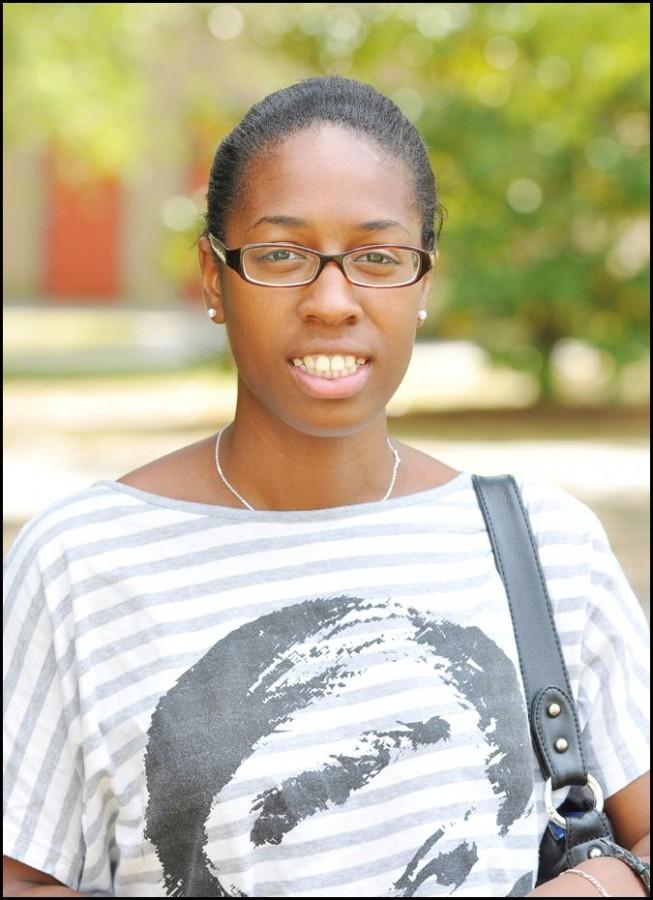 What does it mean to be American? People around the world answer that question every day. Some people place Americans up on a pedestal while others try to push them down into the dirt. Oftentimes it seems everyone knows what it means to be American except for Americans themselves.

Ella Victor, a student from Paris, France, is spending this semester at FMU.

Aug. 24 marked Victor’s third journey back into the States (America). The plane ride from France to Florence took 13 hours. Her first visit to the United States took place three years ago when she spent a whole year in Killeen, Texas. Her second visit was last summer when she spent a week of her vacation in New York City.

“Francis Marion University is so amazing,” Victor said. “It is so different from France. We have a big campus. In France the buildings are all very small. Here you have everything. You have a big gymnasium where you can play sports. You have a lot of organizations that you can participate in.”

To Victor one of the biggest differences between American universities and French universities is the opportunity to choose majors and classes.

“You are lucky guys here because you can choose the classes that you want,” Victor said. “You have so many choices. In France we don’t have that chance.”

Victor is in the process of asking her school in France for an extension on her exchange program. If she is not successful in getting the extension she said that she will be forced to leave by Dec. 22.

If Victor doesn’t get the extension for her exchange program she hopes to go home to finish this year of schooling. Once she finishes that she will be able to apply for an internship or for a chance to visit another university in America.

“I am interested in organizing events,” Victor said. “I would like to be an athletic director of a school or university. I really just plan on living here in the States.”

Victor said that this semester was like a test for her to see if she feels comfortable living in the United States.

“I wanted to be sure that I could adapt myself here,” Victor said. “I have only been here two weeks and I can tell that this country is the one for me. I really like the culture, the people. You guys are so open-minded and welcoming. It is really different in France.”

Victor is very enthusiastic about American culture. She said that American movies and music really influenced her while she lived in France.

“The styles of my clothes, my mp3 songs, my favorite ice cream (Ben & Jerry’s Cookie dough) were all from the American culture,” Victor said. “I remember a very famous expression from Middle School: ‘c’est kainry’. It can be translated as ‘it is American.’ We used this sentence to manifest that something is really cool.”

To Victor, there are many reasons that she wants to come to America. According to her the most important one is just to be successful.

“I have heard so many success stories about how ordinary men or women became rich starting with nothing,” Victor said. “So why can’t this person be me?”

Victor said that France is a wonderful place to live. She also said that she is very proud to be French.

“The weird thing is that I feel the more French than ever when I am abroad,” Victor said.

To Victor, America is a country that supports hopes and dreams – a place where people can chose to be successful no matter what place they were born. Victor wants to live in America because to her being American means being successful in life.