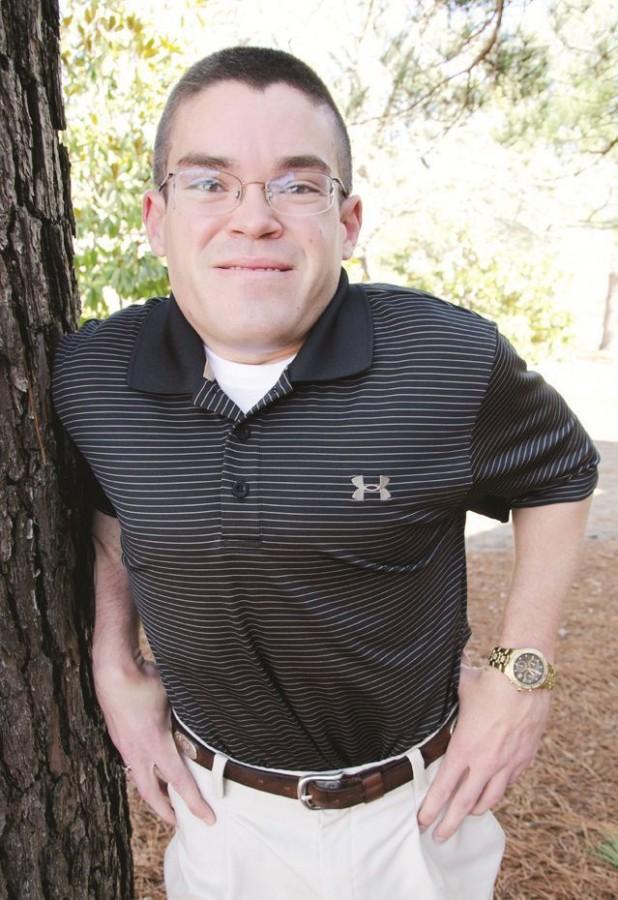 Standing at only five foot even, Brian Welch, a 2006 Francis Marion University graduate, is living proof that dynamite does in fact come in small packages.

Welch, 27, has no problem admitting that he is only “knee high to a grasshopper,” but height is the only thing he is short of.

“He cares about the people around him and he wants to see them do well,” Carson Askins, a long time friend who considers Welch a family member, said. “He’s always there for you. He’s honest and upfront because he’ll tell you what he thinks about a situation in a heartbeat, and if he beats you in golf, he’ll never let you forget it.”

When Welch was still just a toddler, he was diagnosed with Spondyloepimetaphyseal Dysplasia, a skeletal disease that affects bone growth.  When he was eight years old, Welch had his first operation during which both his legs were broken and set in casts from his thighs to his toes in hopes that the inside of his legs would stop growing enough for the outside to catch up.  At age 11, staples were put into his knees for the same reason since the earlier operation had not given the results his doctors had hoped for.

“I remember people would ask me if I wished I had a normal life,” Welch said, “But to me it was normal.”

For a while everything was as normal as it could have been, and like almost every young boy, Welch loved sports.  Having to use a wheelchair to play tennis and basketball did not phase him at all.

Unfortunately, Welch’s favorite sport, football, was always an arm’s length away since his diagnosis strictly prohibited him from playing the game. However, everyone in his hometown of Johnsonville could always find him on the sidelines of every Johnsonville High School football game keeping stats and cheering for his beloved Flashes.

Coaches even allowed Welch to dress out with the team for their last home game of his senior year.

“I guess the fascination with football came from not being able to play,” Welch said.

Welch took that fascination with him to FMU where he decided to become certified in secondary education with a major in history and a minor in political science so he could teach and coach football back in Johnsonville. However, he almost never graduated.

Scoliosis was a byproduct of the skeletal disease Welch had, and over the years, even though he was wearing a back brace at night, it bent his spine into a painful shape.

Welch said that he was dead set on not having an operation, but doctors gave him a grim ultimatum.

“They told me I either had to have the surgery, or within a year’s time I would be paralyzed,” Welch said.

It scared Welch even more when his doctor told him that he did not feel confident enough in his abilities to do the surgery himself.

So, on May 12, 2003, a week after his freshman year at FMU ended, the 19-year-old Welch headed to MUSC to endure a 13-hour operation where doctors would screw four rods into his spine.

In order to successfully put two of the rods in place, one of his left ribs was taken out, and his left lung was deflated so doctors could reach his spine. The other two rods were put in through his back. It was clear that there was a huge possibility Welch would never wake up from his operation.

Everything seemed to be going well until six days later when Welch went into respiratory arrest at four o’clock in the morning.

Doctors told him that if he had been home then he would have died.

As scary as that sounded, Welch said it was one of the “most powerful moments” in his life because of what he called his “white light experience.”

“There was a white light to the left of me that kept getting closer,” Welch said. “I kept hearing my name being called. It almost got to me when the room opened up, and the [person] standing beside me said I was going to be all right.”

Welch said that not a day goes by that he does not wonder why he got a second chance.  He said he now he lives an “energetic bunny life.”

Eight years later, he is doing what he knows he was meant to do.

“I have never gotten up a day not wanting to go to work,” Welch said. “Being able to say that already puts me a step ahead of a lot of people. Plus, I get summers off to work on my golf game.”

Welch teaches Global Studies and Government and Economics at Johnsonville High School.  He also coaches the quarterbacks for the varsity football team, and he is the head coach for the golf and undefeated junior varsity basketball teams. He is also chairman of the History Department.

Welch recently received his master’s degree from the United States Sports Academy in Sports Management, and he is working towards his ultimate goal.

“I want to be the head football coach for Johnsonville,” Welch said. “I know most people usually want to leave their hometown, but I could not see myself anywhere but here. However, if USC happens to call first, then so be it.”

Welch is humble about how many lives he has influenced in his 27 years of life and just a few short years of teaching, but most people around him, especially his students, have no problem speaking kind words about him.

“Coach Welch has impacted my life in a lot of ways,” Brandon Carter, a past student and football player for Welch, said. “His famous ‘Last Lecture’ he gives to his senior Government and Economics class really made me think about life and the decisions I was about to make in the near future. After witnessing first-hand his positive impact on all the students he teaches and athletes he coaches, it helped solidify my decision to become a teacher and coach. He leads by example, which goes a long way in capturing the attention and respect of the people around him. His honesty, integrity, and leadership really made an impression on my life, and I hope that someday I can have the same type of impact on a student’s life that he had on mine.”

“There’s never a dry eye in the house,” Welch said. “I just talk about what to expect in life, and I feel like if my seniors know that somebody has faith in them, they will know they have the ability to succeed.”

His “Last Lecture” is becoming more and more famous in his small hometown.

Welch credits his parents and many other special people for all of his success so far.

“My daddy would work all day, but I can’t remember a time when he said no to throwing a football or playing basketball with me when he got home,” Welch said.

Welch said that he was led by a Christian example from all angles of his life, and since he knows one is not promised tomorrow, he is making the most of whatever time he has left.