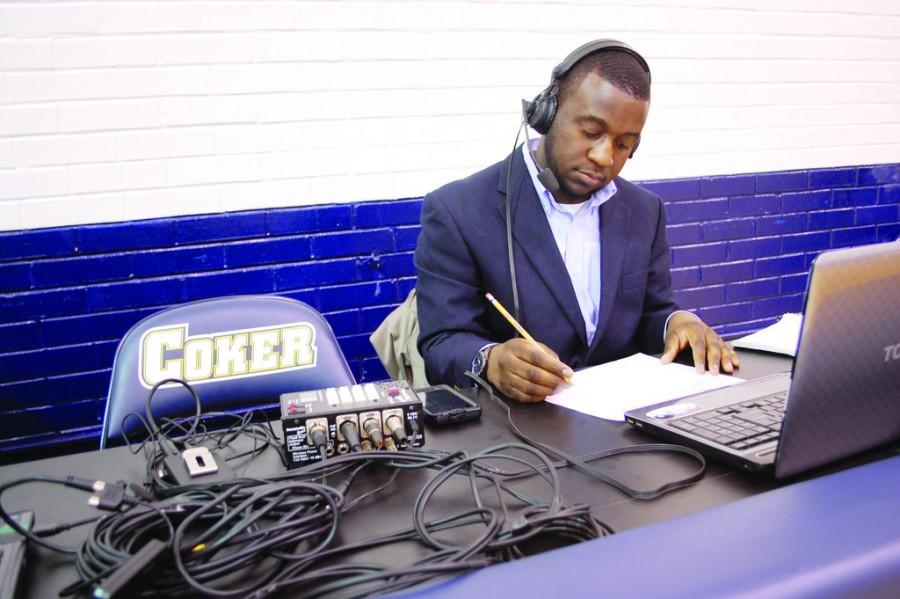 Since Armand Broady was young, he has always had a passion for sports. Communicating and story-telling was his niche. After attending Francis Marion University and earning a Bachelor of Arts degree in Mass Communication with an emphasis in Sports Journalism, Broady has gone on to secure a position doing what he loves best, sports commentary. For Broady, what started as a simple childhood dream has come full circle.

While attending FMU, Broady spent three years as a color commentator for both men’s and women’s basketball teams, as well as two years as public address announcer for the university volleyball and soccer teams. Just after his graduation in May 2013, Broady interned as a play-by-play announcer with the Florence RedWolves, a summer-league baseball team, doing radio-style broadcasting.

Today, Broady is the Director of Broadcasting at Coker College in Hartsville, SC. Broady explained that he did not actually find this job but in fact, it found him.

“My mentor Chris Burgin, a sports talk radio host and play-by-play announcer right here in Florence, sent me an email about Coker needing a play-by-play broadcaster,” Broady said. “Little did I know that he had already informed them about me.”

The contacts at Coker responded to Broady’s inquiries about the job almost immediately and expressed interest in him. Only a short time later, Broady was hired.

“At the end of the day, I ultimately thank my Lord and Savior Jesus Christ for this opportunity because I know that He’s my ultimate provider and every good thing that happens to me happens because of Him,” Broady said.

Along with his mentor, Broady cites Professor Maria Lundberg, Dr. Gary Griffith and Dr. Hubert Setzler as individuals that heavily influenced him and his career.

“I’ve learned so much from Mrs. Lundberg about diction and breathing, as well as working vehemently to eliminate my Southern accent,” Broady said. “She opened my eyes up to being a well- rounded communicator and journalist, not just being a sportscaster.”

Broady said visits to Griffith’s office always turned into a discussion about broadcasting, with Griffith challenging him to be more descriptive and to paint a better picture for the viewer or listener when “calling” games.

Setzler, Broady’s first broadcast partner, gave him the freedom to be himself which allowed him to receive the lessons, which according to Broady, can only be taught through experience.

Even today, Broady can look back, remember being a child and having a love for the game.

“I can recall being seven years old, drawing scoreboards in a notebook and, in my mind, calling a football game,” Broady said. “It’s just always been a part of me.”

Broady encourages current students, especially sportscasters, to “always have a thirst for knowledge and information.” He also suggests that communication students should be diverse.

“Love communication of all kinds,” Broady said. “Emcee events when you can and practice speaking in a more professional manner with good inflection and emotion.”

Lastly, Broady said he encourages students to stay humble and be kind to others because “you never know when your name will come up for job consideration, like mine did, because someone else thinks highly of you.”