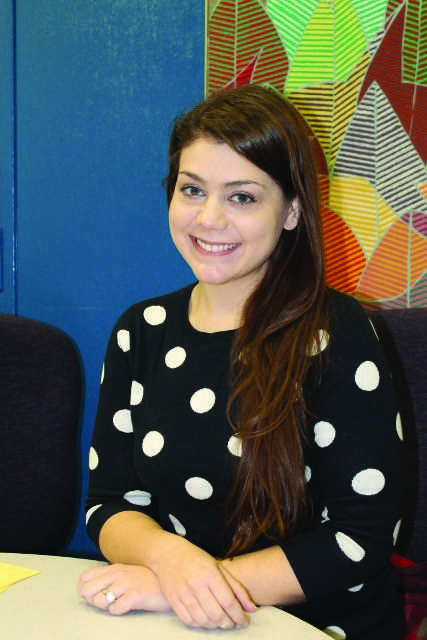 When Melody Pritchard, senior English major, began to pursue her undergraduate education at Francis Marion University (FMU), she had low expectations about what it would be like and how she would spend her years here.

“I came to FMU because it was convenient,” Pritchard said.  “I certainly didn’t expect to enjoy my time here as much as I have.”

At the beginning of her education at FMU, Pritchard also did not expect that she would graduate with a degree in English, liberal arts.

Pritchard said that before starting her English major, she studied biology, psychology and thought about changing her major to accounting.

“I tried out many different majors before landing on English,” Prichard said.  “I ultimately chose English for two reasons: first, I love it; second, I suck at everything else.”

Once deciding that an English degree was the one that was right for her, Pritchard began her studies with the intention of continuing to graduate school.  She focused time, energy and efforts in campus organizations that are related to the English major and in gaining experiences that would help her in the future.

“I currently work as a tutor in the Writing Center, and I serve as president of the English Honor Society, Sigma Tau Delta,” Pritchard said.  “I’m also on the Snow Island Review staff and a member of the Honors Program.”

While attending FMU and being involved in a variety of organizations, Pritchard has also participated in multiple academic conferences including the Southeastern Writing Center Association (SWCA) Conference earlier this semester.

“The Southeastern Writing Center Association was a lot of fun,” Pritchard said.  “There, my coworkers and I presented a video we developed to introduce new students to the Writing Center.”

Apart from this conference, Pritchard has also presented her literary research on more than one occasion.

“I also enjoyed presenting a paper I wrote on 18th century writer Sarah Fielding at The Southeastern American Society for Eighteenth-Century Studies conference,” Pritchard said.  “This past semester, I was able to chair a panel at the American Literature Association Symposium on War and American Literature in New Orleans.”

While Pritchard has done research in several different genres of literature, she is currently planning to continue her studies with a focus in modern and southern literature.

“…The Faulkner course I took in fall of 2012…not only solidified my desire to pursue a graduate degree, but it also helped me decide the area of literature that most interested me,” Pritchard said.

In addition to realizing what her academic passions are, immersing herself in her studies and gaining practical experiences, Pritchard has also developed many positive relationships at FMU.

“All of my English professors have been inspiring,” Prichard said.  “Dr. Christopher Johnson, [English, modern languages and philosophy department chair,] took me under his wing my first day as an official English major and has served as a source of guidance and encouragement throughout my many years at FMU.”

Pritchard continued, “Dr. Jennifer Kunka, [professor of English and Writing Center director,] has taught me more about helping students write than she will ever know; and Dr. Shawn Miller, [assistant professor of English,] well, all I can say is God bless Dr. Miller.”

Pritchard explained that she “could say something similar about every English professor [she’s] taken; they’ve all been very good to [her].”

Pritchard also said that some of her favorite memories of FMU have occurred in the Writing Center.

“Working there [in the Writing Center] has given me so many opportunities,” Pritchard said.  “Also, my coworkers and I all love each other and have a good time.”

In the fall, Pritchard will begin graduate school for English, but she isn’t sure where yet.  She has received acceptance into multiple programs with funding.

“I’m leaning toward [the University of South Carolina] USC at the moment, but who know where I’ll end up,” Pritchard said.

Ultimately, she wants to complete a doctorate degree in American Literature.  She plans to “teach and write and hopefully get paid for it.”

While reflecting on her time at FMU, Prichard said she would not do anything differently.

“My undergraduate career has been long and strange, but it’s led me to where I am now,” Prichard said.  “My years at FMU have been fun, and I wouldn’t change a thing.”