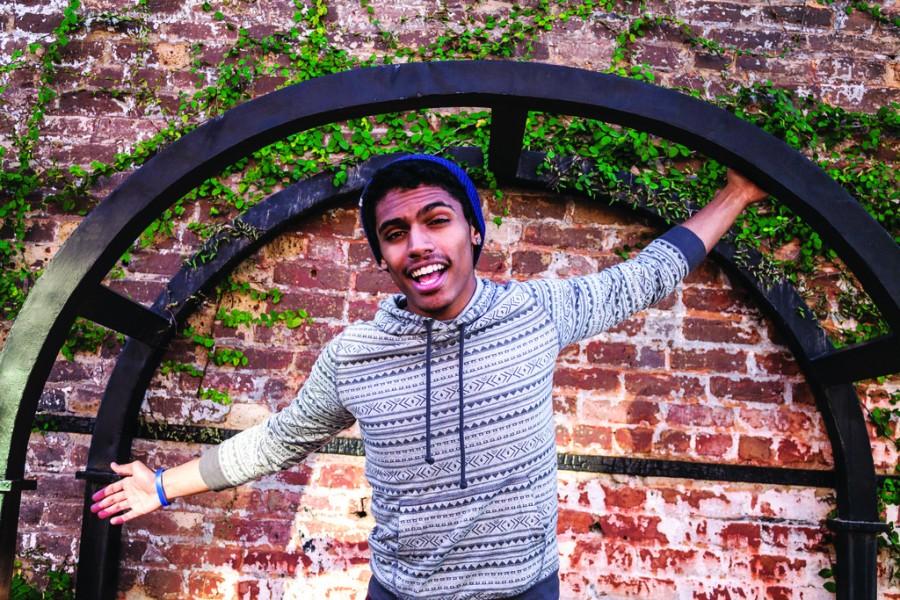 With a big personality and even bigger dreams, freshman theatre major Kevin Holloway is embracing every opportunity Francis Marion University (FMU) has to offer.

Raised in a military family, Holloway was born on the island of Oahu, Hawaii, but has lived all over the country.  Finally settling in South Carolina, Holloway decided to attend FMU to pursue his dreams of theatre and performance.  He may have moved around a lot as a child, but he has not let anything slow him down or dampen his spirits.

Holloway has a personality that captures an audience the second he walks out on stage.  With a resume that includes singing, acting, dancing, fashion and modeling, he is thriving in the fine arts world. His passion runs deep for acting and modeling.

Holloway has been preparing himself for a life of fame and talent since he was born.

“I was born speaking in different accents, singing and acting,” Holloway said.  “I cannot imagine myself doing anything else except acting.  There is nothing else in the world that satisfies me like being on stage.  When I step onto a stage, I get this tingly feeling inside that makes me so happy I want to burst wide open.”

Holloway’s passion for theatre is equally matched with his natural talent on stage.  He has performed in several plays and scoring the lead role is not a rare moment.  He played the lead role in his high school’s rendition of “Bye Bye Birdie.”  At FMU, Holloway has taken the stage in “Circle Mirror Transformation” and will also play one of the lead roles in the upcoming play “The Fantasticks.”

Holloway gleans inspiration from fellow actors including Jim Carrey, Johnny Depp and Robin Williams.  Holloway is also motivated by his audiences.  “Being that close to the audience but not being able to react to them is invigorating.  It makes me strive to be flawless on stage,”  Holloway said.

Although he is an up-and-coming talent in the theatre world, Holloway remains humble in spirit.  He brushes off every compliment received by saying that he knows he can always do better and improve.  He welcomes constructive criticism from everyone so that he can continue to learn and progress forward in his career.

Nineteen-year-old Holloway may be young, but he has already discovered his passions – acting and fashion.

Holloway prides himself on his appearance and his ability to dress well.  Holloway uses clothing as a way to express himself and present himself professionally to the world.  He holds firm to the motto that “looking good makes you feel good.”  He has recently signed with DeAmore Modeling Agency out of Columbia, S.C.

Holloway will be starring in FMU’s upcoming performance of “The Fantasticks. “ The play is a comedic musical directed by Professor Keith Best.

The musical is a Romeo and Juliet style story about two lovers whose fathers live next door.  The fathers pretend to feud with each other in order to bring their two children together.  The fathers hire a man named El Gallo (played by Kevin Holloway) to abduct the girl so that the boy can come to her rescue and fall madly in love with her.  In the process, El Gallo adds fuel to the fire between the families and causes chaos on the stage.

“Everyone should come out and see The Fantasticks!”  Holloway said.  “It is charming, funny, thrilling and will leave you laughing nonstop.  Not to mention, Dr. Best is a freaking genius and did some amazing things with this musical.”