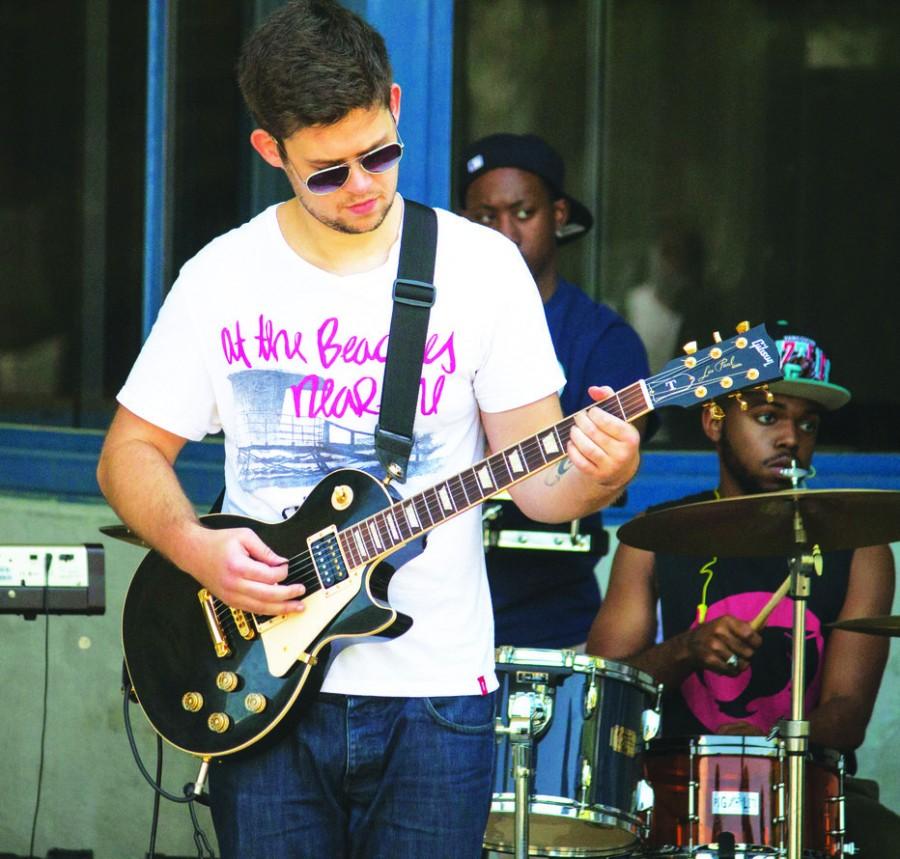 Junior music industry major and Germany native Daniel Gogolin has embraced the study abroad program provided by FMU and has decided to transfer for the remainder of his college career.

As a music major at University of Koblenz-Landau (UKL) in Landau, Germany, Gogolin was ‘hand-picked’ to attend FMU for a semester abroad to study music industry and production.

While giving a lecture at UKL, associate professor of music Dr. Brandon Goff met Gogolin and discovered they shared a similar passion for music.  Goff convinced Gogolin to try the study abroad program and study music under him so they could improve Gogolin’s skills and help to develop his talents using resources not offered in Germany.  After only a few weeks at FMU, Gogolin talked with his parents and decided to transfer to FMU for the remainder of his college career since Germany has shut down all music programs for lack of funding.

Gogolin has chosen to study music industry and production because of the wide range of opportunities that the industry offers.  He is currently a vocalist in a band back in Germany called “The Story.”  As a music industry major, he would like to return to Germany with his skill set and degree and begin producing the music for his band.

Gogolin’s music abilities do not stop at singing and music production.  He has studied piano for 18 years and guitar for 15 years.  He is also able to fluently speak English, German, French and Russian.  His knowledge of other languages and cultures has influenced his views on music.

Since starting at FMU, Gogolin has embraced the resources offered to the fullest extent.  He has spent countless hours in the recording
studio and has even recorded a rap song.

“My childhood dreams haven’t changed much,” Gogolin said.  “I have always wanted to be a musician.  When nobody understands you, music does.  People in America live music every day; it’s in the culture here.  The one thing I love most about music is that it brings people together.  I love music, and I live music.  It’s the first thing I think about when I wake up.”

Not only does Gogolin love music, but he also embraces other hobbies as well.  He has been playing soccer and tennis since he was a child and has always enjoyed being physically active.  Although he has not had the opportunity to travel throughout America much (although he plans to next semester), he has traveled to more than 20 different European countries.

Coming from an average income family in Germany, Gogolin took a risk transferring fully to FMU.  Higher education in Germany is free, so Gogolin will be required to pay FMU’s tuition costs to stay for the next year.

While being in America, Gogolin has made several observations about American lifestyles.  He said the most notable one is that Americans do not walk anywhere.  In Germany, buildings are not accessible by car, and drive-thrus are non-existent.

“The craziest thing I saw in America was an ATM,” Gogolin said.  “You can just drive up and get money.  That and everyone has a gun.  It is illegal to own a gun in Germany, but here people have them just for fun.”

Gogolin plans to continue recording at FMU and producing music.  Not wanting to waste any opportunities given to him, Gogolin is embracing everything FMU and America has to offer.