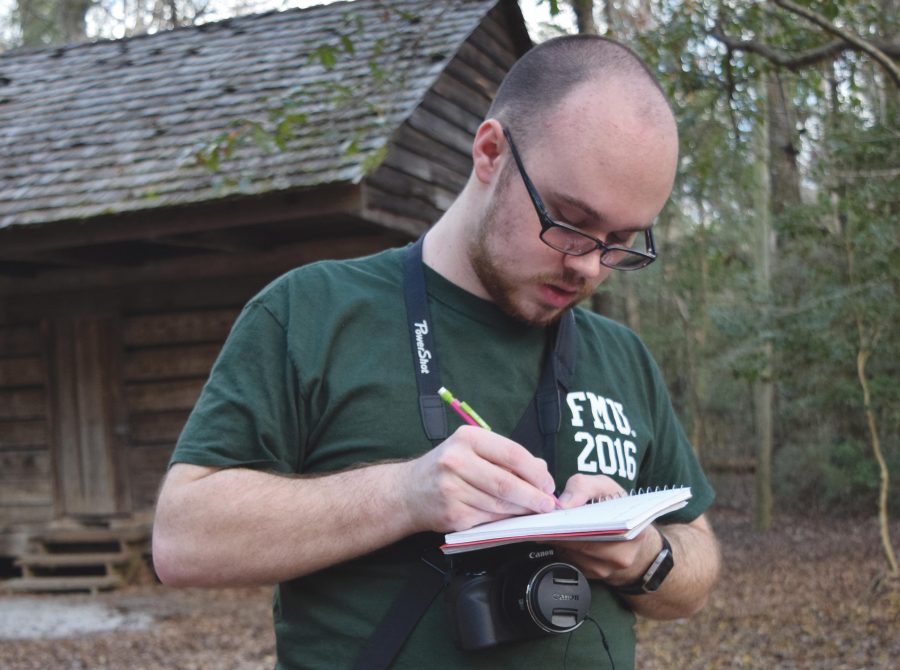 Senior Kyle Stewart is compiling a catalogue of plant species located on the FMU nature trail for his honors thesis so that nature trail visitors can more easily identify the variety of plants.

For his honors thesis, one student is cataloging, photographing and documenting plant species from all over FMU’s campus.

Kyle Stewart, a senior biology major, saw a problem on campus and decided to use his abilities to fix it.

“It started in my interest on the Nature Trail behind the slave cabins on campus and how they kind of have gone into disarray,” Stewart said. “I wanted to do something about that, and I started to research the trail, the history of it. I didn’t find too much. I came across a guidebook that was made in 2001 and it was created by a girl named Jennifer Hall who went here. She put together a guidebook of about 50-60 species of plants as well as some other things.”

Hall’s guidebook was used to label plant species on the Nature Trail, but the signs are now outdated and worn down. Stewart decided to update the 2001 guidebook and expand it to cover all areas of campus.

Stewart’s thesis has two parts: the document and the signs. Stewart is creating a document that has pictures, descriptions, locations and history of flora on campus in terms that anyone can understand, regardless of their scientific background. The signs will have changeable cards, depending on the season and location, that can be inserted into new stainless steel posts. FMU Honors will reimburse Stewart for his expenses and will help develop a partnership with grounds keeping.

“There will be more signs that can be changed more quickly if they need to be,” Stewart said. “There will be stainless steel posts that you can slide a card in and out of. I’ll be using paper that will last, as well as UV film over it to protect it from the sun.”

However, starting work on the Nature Trail has been no easy task. Stewart said the trail seems to have been abandoned because so few people walk on it.

“The first big challenge is dealing with the remnants of the trail,” Stewart said. “It’s changed a lot in that time, and basically we have to start over. I’m a little worried about how long that might take, but I’m going to get it done.”

Some of the main areas Stewart plans to catalog plants are near the fountain, the arboretum and the Nature Trail.

“I’d like people to be able to pick this up and think, ‘Oh, I’ve walked by there before,’” Stewart said. “I want people to become familiar with their environment and to learn to appreciate it. I hope people will look at the pictures and see campus. You don’t really have to go far away to see these beautiful examples of nature.”

While Stewart plans to catalog at least 60 plants, he said he hopes that others will continue his work once he graduates. He hopes students will want to help continue to expand the catalog, format it into a guidebook and maintain the posts. Technologically, Stewart hopes a student will work to eventually create bar codes or QR codes that would link the user to the document online.

“It’s about doing the work that will hopefully inspire someone else to do even more,” Stewart said. “I feel that’s what science is all about.”

When Stewart finishes his thesis, he will try to make it available as a PDF through the biology department’s website.