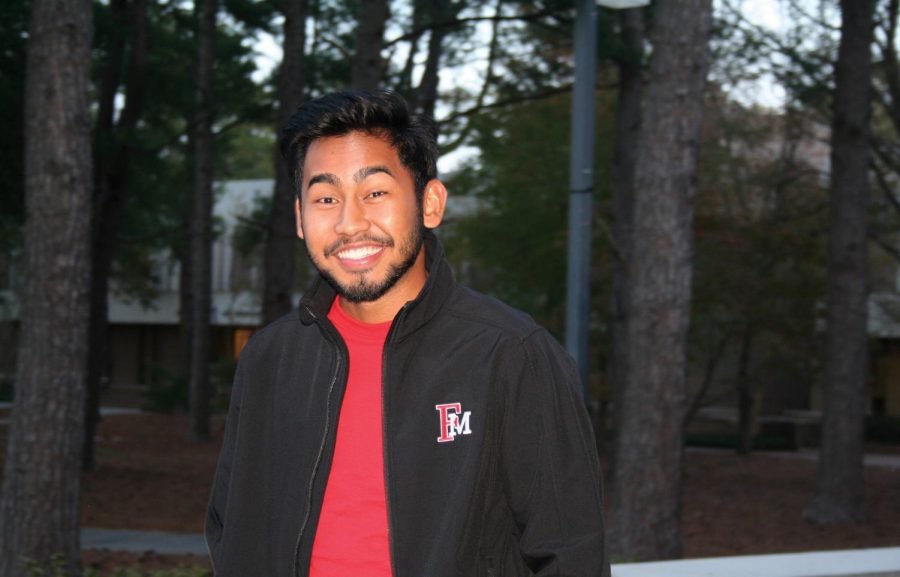 Ryan Singh, a native of Georgetown, Guyana, has felt welcomed by the kindness of the FMU community.

Ryan Singh is a management information system major with many titles and roles in different areas at FMU. Before Singh was an involved and committed student at FMU, he was in Georgetown, Guyana in South America, where he grew up and began his college career. Ryan grew up in Georgetown with his parents and siblings where he completed his first year of classes. Ryan had an aunt and grandmother living in the U.S. who opened up a door for him to come and explore the U.S. three years ago, Ryan decided to first visit New York City to visit for a week with a few family members before traveling to Florence to begin adjusting to his new life and to enroll at FMU.

“I landed in the United States on June 12, 2015, which is my birthday,” Singh said. “Moving to a new country on my birthday was really significant and I know it will be a memory I won’t forget.”

Ryan said even though the people he grew up with spoke English, it was still a huge adjustment moving to the United States.

“I was pretty nervous about coming here because I didn’t know anything, and I didn’t know anyone around here except my family,” Singh said. “It was scary at first but everyone at FMU was so kind, it was not as hard as I thought it would be.”

Even though he knew the transition would not be easy, Singh said the decision to come to the U.S. was not difficult to make.

“I had always wanted to come to America,” Singh said. “Who doesn’t want to come to America? It’s such a nice place and it’s a blessing to be here. I am so thankful to my family for giving me the opportunity to come here.”

Singh said the biggest adjustments he faced were food, the people and the temperatures. Singh said the food in his hometown is fresher because it came from their personal gardens and the temperature here is much colder than the year-round mild weather that comes from being so near to the equator. The most notable difference, Singh noted, was the attitude of the people was completely different from his hometown.

“If you think of a place you would want to raise kids, this would be the perfect place because everyone is hospitable and kind,” Singh said. “People will come up to you and say hi and ask if you are doing good even if you have never met before. The kindness that strangers show to each other is amazing here.”

Singh said he met his best friend Chris Hutchinson when Hutchinson stopped to ask how it was going in passing. Singh said they immediately found they had a lot in common.

“The whole culture of how people are so kind here, how they will just say hi or stop and ask how you are doing or hold the door for you is so amazing to me,” Singh said.

Since coming to FMU, Singh has become a big part of FMU organizations. Ryan is a member of InterVarsity as the chapter president, FMU Diplomats, orientation leader, English honors society and the business society.

“Two important goals I set for myself when I came here was to get inducted into the English honors society and the business society,” Singh said. “I have achieved both of those goals with the support of all my professors.”

Singh said no matter how hard the challenges of being in college are, it doesn’t change the value of your future

“Just like a 20 dollar bill, no matter how much you crinkle it up it’s still valuable,” Singh said. “Just like college, no matter how hard it is and the struggles of being a college student, you and your future are still so valuable. Invest in yourself and make the most out of this time you have to improve your value and get involved.”