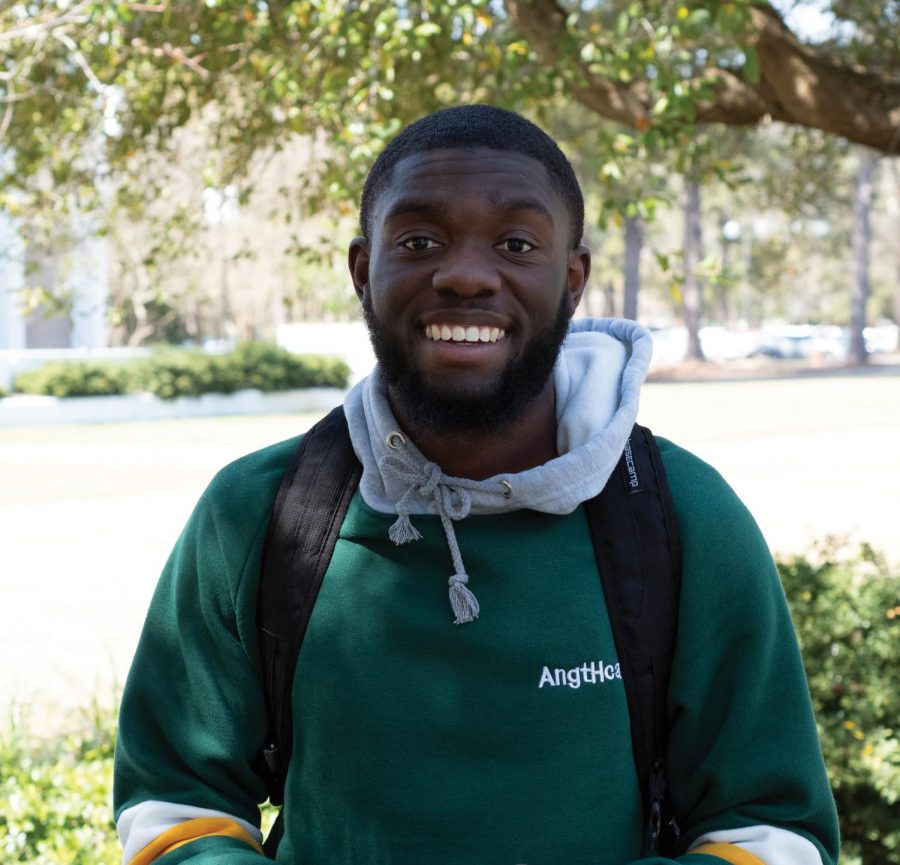 Senior Rischard Brown has dedicated his time at FMU to helping others, and has accredited his musical gifts and recent competitive success to his faith.

Brown, who was born and raised in Monck’s Corner, said he chose to come to FMU after a “decision day” at his high school where he talked to FMU representatives and decided it was the right school for him.

Brown was originally a pre-pharmacy major before switching to psychology.  However, both plans stemmed from Brown’s desire to help others. He said his interest in psychology came because of his interest in speaking and encouragement.

After graduating, Brown wants to go into counseling. To accomplish that goal, he is currently interning at the CARE House of the Pee Dee, a non-profit children’s advocacy center.

“We deal with children who are physically and sexually abused,” Brown said. “I’ve learned so much there and I’ve enjoyed it.”

Brown is an active member of the FMU community, often performing spoken word at campus events. Brown said he was never interested in writing poetry, but that his interest in photography led him to write.

“I would post pictures on Instagram, but then I would need a quote,” Brown said. “I didn’t want to use anybody else’s stuff; I wanted it to be mine. From there, I would start writing and here I am now.”

Since then, Brown said he began to share what he had written with more people. In high school, he participated in a scholarship competition, which was his first experience performing for a live audience. He then participated in small open mic nights before Assistant Vice President for Student Affairs Daphne Carter-McCants invited him to perform at campus events, which lead to opportunities to perform at bigger events. Recently, Brown, along with his friend Christian Holloman, won FMU’s talent show for his spoken word piece.

Brown said he creates his spoken word pieces by being observant.

“I pay attention a lot to what other people are going through, what’s going on in my life and anything that I feel like God shows me,” Brown said.

Brown said religion is a prevalent part of his life. He is an intern with FMU’s Baptist Collegiate Ministry (BCM), where he leads a Bible study. He also plays the drums for BCM’s band, an ability he considers to be a gift.

“Anytime I was at church growing up, and I got the opportunity to learn, I would just get on the drum set and look at what other people did, then try it,” Brown said.

According to Brown, BCM allows him to practice using their drum set, but his dream is to get his own so he can continue to learn. Now that he is playing more often, Brown is taking drumming lessons from his friend but still relies on the experiences he had growing up.

Brown said it can be difficult to strike a balance between his school, work and extracurricular activities, but that his drive keeps him going.

“I wouldn’t call it hard, but it can be difficult,” Brown said. “Especially with the semester winding down, I’m trying to find a balance. But I am passionate about the things that I’m doing, so it doesn’t get too overwhelming. If I wasn’t passionate, then it would be a major stressor.”

In his free time, Brown said he loves to clean because it frees his mind, a trait he picked up from his dad. He also said he likes to play basketball, run and cook. He also likes helping people when he gets a chance.

“I really enjoy when someone needs a ride and I can just be like ‘alright’ because I just really love helping people,” Brown said.