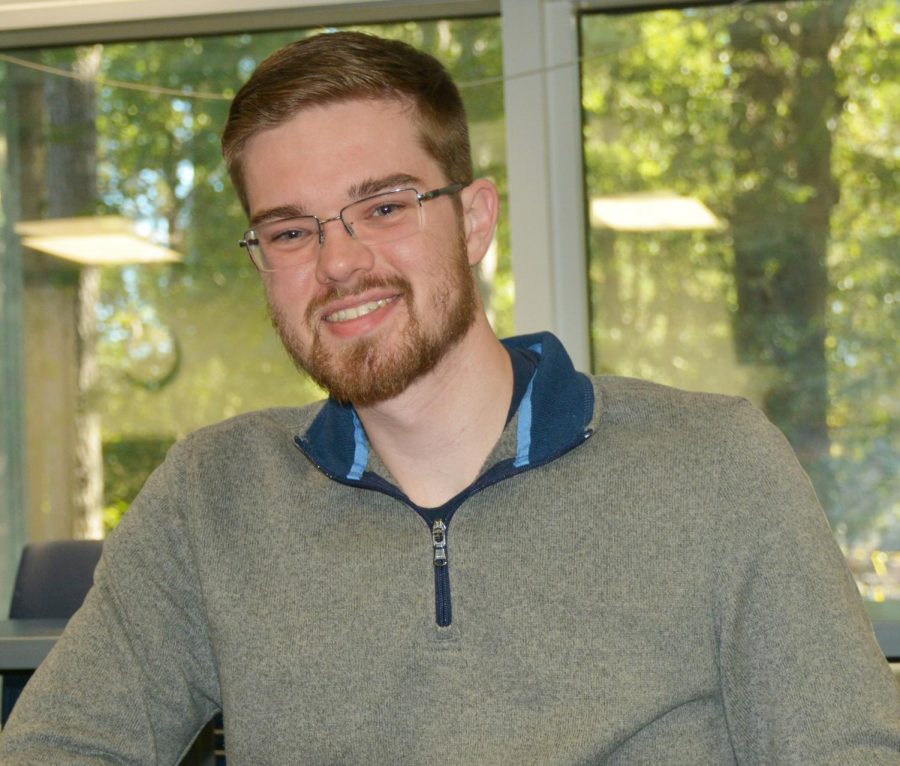 Jonas Smith, a health physics major, has had a passion for physics since high school.

Senior health physics major Jonas Smith said his passion for physics began in high school because of his teacher who always had interesting experiments.

Smith was born in Arizona, but because his father was in the Air Force, he and his family moved around a lot. Smith said he would consider himself a Myrtle Beach native because he spent the majority of his pivotal years growing up there after his father retired from the Air Force.

Smith said it was in high school when he discovered his appreciation for and proficiency in physics because of a teacher who brought physics alive in a new way each class.

“I went to Socastee high school, and that’s actually where I gained a huge love for physics because I had a really great teacher there,” Smith said. “A lot of it was that he would come up with something new each week and do a lot of real-world examples. What really stood out to me was the kinematics like speed and forces and he showed us videos of planes landing sideways because when the wind blows a certain way the airplane has to orient its self against the wind so it doesn’t get blown off course and I was like, ‘Wow, that is really crazy,’ and then after that he would show us the calculations pilots have to do just to land.”

Smith said that after he graduated from high school he was unsure of what direction to take his affinity for physics.

“I hadn’t considered FMU but it turned out my uncle was a health physicist and he said ‘Hey, here is something you can do with physics that’s got to do with radiation,’ and I said that’s pretty cool,” Smith said. “He actually connected me with Dr. Jokisch at the school and he had me here one time and he showed me around the school.”

A big part of why Smith chose FMU is the welcoming treatment he received when he visited FMU.

“When you are applying to schools you want the school to want you, you don’t really want to be begging for a place at the school, which is what it felt like when I was applying to Clemson,” Smith said. “They were like ‘Hey, you can come or you can’t,’ but here at FMU I met up with Dr. Jokisch. He helped me meet students and showed me around the school and said, ‘We’d really appreciate you coming here.’”

According to Smith, Derek Jokisch, chair of the physics and engineering department and professor of physics, played a big role in making him feel welcomed and even went so far as to allow Jonas to sit in on one of his upper-level radiation classes. Smith said that being able to sit in on the class and getting a taste of how it would be, along with Jokisch’s hospitality and inclusivity, is what made him happy he chose FMU over other schools.

“It turns out it’s one of the only schools in the country with an undergraduate health physics program,” Smith said. “One of the biggest things is that I felt like the school wanted me and I felt very welcomed.”

Smith has been afforded many amazing opportunities because of FMU, such as being able to intern at Oak Ridge National Lab, which is the biggest national lab in America, and the Savana River Site. Smith said that working with Jokisch is one of the reasons he was able to get connected with the internship opportunities.

Smith is involved in several on-campus organizations and he’s the current president of the Society of Physics Students (SPS).

“Freshman year my personality was pretty much, ‘Hey, I’m the physics guy,’ and it really hasn’t changed much since then,” Smith said. “Dr. Smith recommended I go to an SPS meeting and I did and there were a lot of older kids about to graduate. It was good for me because you get to make friends with people who have already done all the things you are about to do and you can kind of learn from them and get some really good advice on how to avoid mistakes they may have made in the past.”

Smith said making friends and learning from upperclassmen was initially the main reason he enjoyed SPS, but the community outreach is a new aspect that is very meaningful to him. Smith said he works with many off-campus and on-campus organizations to do guest shows and educate through fun, hands-on physics demonstrations.

“Dr. Myers, who is in charge of the astronomy department, would go to ScienceSouth or  FMU events and do demonstrations, which is really cool for me because getting to see those demonstrations is what got me into physics,” Smith said. “Now I get to do that for other people is really cool. From the beginning, for me, it’s always been about getting other people excited about what I do and maybe helping other people not be afraid of science the way that a lot of people are.”

Smith said he enjoys working at the tutoring center as a physics tutor helping students get past their fear of the math portion and learning to work through the problem.