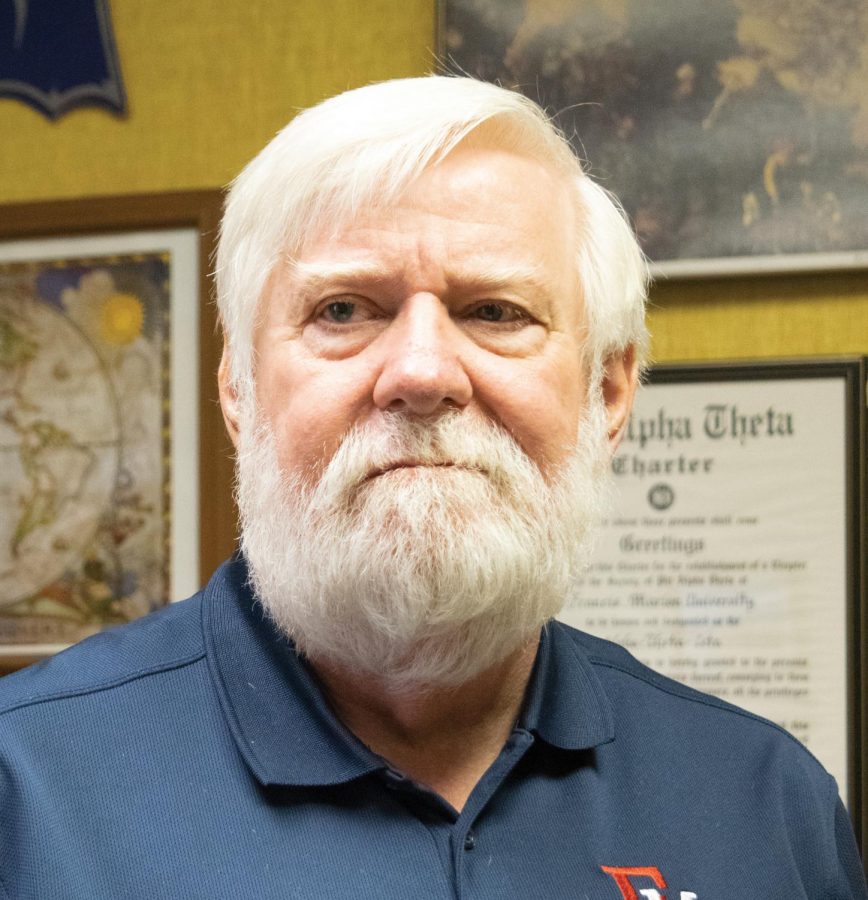 Robert "Bob" Kilgo, a senior history major, was influenced by his family when he decided to go to school.

Robert “Bob” Kilgo, a senior history major and Darlington, SC native, is not your typical student.

“I grew up in Darlington,” Kilgo said. “Lived there all my life.”

After graduating from high school, Kilgo went to Emory University where he graduated in 1970 with a B.A. in political science. From there, he went to teach in an elementary school in Darlington for two years before he went to the University of South Carolina to study law.

“When I first went to college, I wanted to major in history, but then I also loved politics, so I went the other route,” Kilgo said.

Graduating from USC in 1975, Kilgo returned to Darlington to practice law until 2018.

This isn’t the first time Kilgo has been to FMU.

“I actually came out here in 1970 and took a European history course, which was a graduate course at the time,” Kilgo said. “Then I took a couple of education courses out here in ‘72.”

At FMU, Kilgo has taken advantage of many opportunities, enrolling in a Maymester course that went to France, Germany and Luxembourg in 2019, and also presenting his research, “A Mexican Perspective on Property Rights,” at the Phi Alpha Theta (PAT) Biennial National Conference in San Antonio, Texas in Jan. 2020.

Kilgo was influenced by his family when making the decision to return to school.

“My youngest son got his history degree at the Citadel in 2011,” Kilgo said. “He’s also a member of PAT at that chapter, so that gave me the impetus to say, ‘Ok Robby, I’m gonna try that too.’”

Kilgo has also been working closely with the National Park Service and the Gullah Geechee Cultural Heritage Corridor in an internship at the Charles Pinckney National Historic Site and Snee Farms.

“Right now I’m finishing up an internship under Dr. Venters where I’m working for the National Park Service and the Gullah Geechee Historical Commission doing research on Charles Pinkney and Snee Farms in Mt. Pleasant,” Kilgo said. “They are redoing the kiosk and exhibit rooms, and I’ve been doing research on both groups with that.”

While working on the project, Kilgo has been able to learn some interesting facts about Snee Farms and SC history.

“One of the funniest things was a file on Snee Farm,” Kilgo said. “I found a newspaper clip from June 1945 where one of the prisoners from Germany during WWII had escaped from his job at Snee Farm. I tried to find out if he had been recaptured, but I haven’t found anything yet.”

Even though Kilgo taught as an adjunct professor at the Florence-Darlington Technical College for a few years, he has enjoyed getting to interact with students and professors at FMU.

“It’s been a lot of fun, it really has,” Kilgo said. “I’ve thoroughly enjoyed getting to know the youngsters, to tell stories about my life.”

While at FMU, Kilgo has always tried to learn new things and meet new people.

“I’ve tried to do different things, participate, get to know as many people as possible and broaden my horizons,” Kilgo said.

After graduating, Kilgo has some plans after celebrating his achievements.

“I do envision doing some writing, but I don’t know exactly what,” Kilgo said. “I’ve got plans for a trip to Europe and a trip across the U.S.”

Even though he is graduating in May, Kilgo believes that you should always keep learning.

“Don’t ever stop,” Kilgo said. “I’ve never stopped. I keep reading. I don’t particularly read a lot of fiction, but I bought a set of Ernest Hemingway books and read them so I could understand Hemingway rather than someone else telling me about them.”

Kilgo encourages students who are interested in history to pursue their passion.

“There’s a lot of interest working in museums and archives,” Kilgo said. “Getting your hands dirty.”