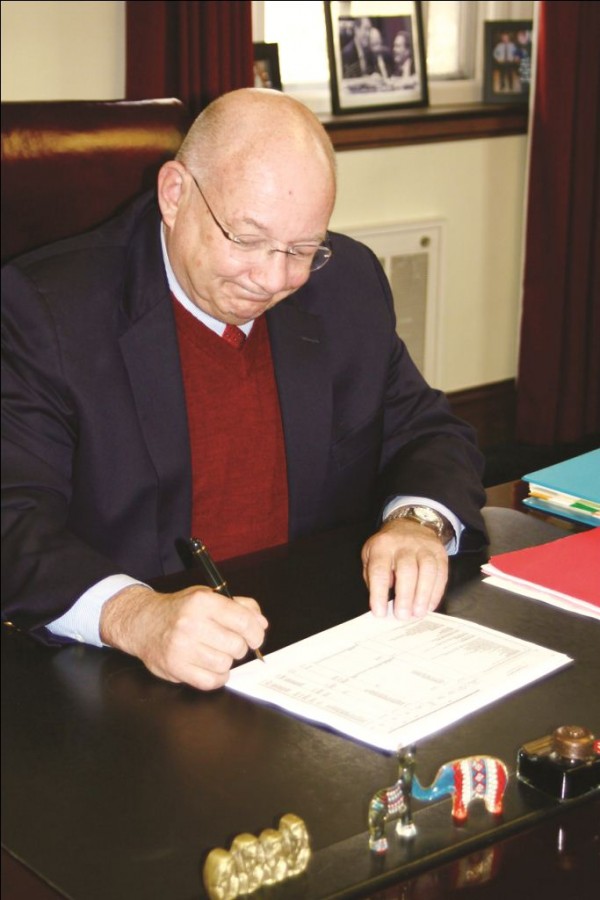 “I came from a very poor family, so I really had to work to get through college, and the notion of trying to juggle class hours and work hours, always lead to a fair amount of perplexity in structuring my life,” Dr. Luther Fred Carter, president of Francis Marion University, said.

Carter has served as president for 12 years, during which time FMU has seen sustained growth and improvements. His passion for the faculty and students is clearly evident when one speaks with him.

“Early on I came to understand that if you aspire to a college career, but you come from a pretty poor family, it takes an enormous amount of sacrifice and trade off to be able to keep that dream alive, and achieve it,” Carter said. “And that’s one reason why I have enormous empathy for students that come here, especially those who are first generation college students … I’m not only sympathetic towards those students; I’m very empathetic to what they have to struggle with.”

Carter has shown leadership skills from a young age, but he has not always been so successful at implementing them. Back when he was in college, he landed himself in trouble that could have put an early end to his academic career.

During his senior year, some pledges decided to road trip him and another fraternity member, dropping them off close to 100 miles from the university. Carter hitchhiked back, but the other member was nowhere to be seen.

“Unbeknownst to anybody, he lived about five miles away, so he went home without telling anybody,” Carter said. “When he didn’t come back in the next two or three days, there was this enormous concern on campus about whether or not he had been harmed or injured.”

Carter said that the Dean of Students summoned him into his office and placed him on social probation for the next semester. The Dean of Students explained to Carter that, as the fraternity’s president, he was responsible for making sure such incidents did not occur at the university.

“That’s a lesson that’s stuck with me over the years,” Carter said. “While at the same time I felt as though I was a victim in the process, his message bore home, he was absolutely correct. I did have responsibility for that fraternity; I was the president.”

After leaving the University of Central Florida, Carter served for three years as an officer in the Marine Corps. During this time, a passion to become a university professor developed.

When his service ended, Carter enrolled at the University of South Carolina, where he received his master’s and doctorate degrees. He then pursued his dream of teaching at a university.

As a young scholar, he was given the opportunity to serve as chair of the Political Science Department at the College of Charleston.

After Governor Campbell took office in 1987, Carter, who specializes in public administration, was invited to join his administration.

During his time in politics, Carter also worked as the executive director of the South Carolina Budget and Control Board. At the same time, Carter found time to teach at the College of Charleston or the University of South Carolina.

Then, in 1999, the FMU presidency position opened.

“The board invited me to come over and meet the faculty and apply for the position, and I did, and I was selected as the president here,” Carter said. “For me, it has been an extraordinary adventure. I’ve enjoyed this job immensely.”

Speaking of his job here, Carter said, “I have to tell you that this faculty is phenomenal … It’s very, very important to me for our students to understand how gifted and how accessible this faculty is, particularly in comparison with faculty in some other universities where they aren’t nearly as student-oriented or student-focused as they are in this campus.”

One of the major tasks that a university president faces is finding funds to support the institution.

“Increasingly universities … are dependent on private contributions,” Carter said. “What runs the university from the stand point of public funding is only a small percentage of what it takes to really make this university work. Another big part of it is the political process; cultivating and developing relationships with members of the house and senate. Ultimately it is their goodwill and political support that continues the contributions, the appropriations to the university.”

“You take the private contributions that we’ve been able to cultivate in the past few years and couple that with the political support we’ve gotten, and that’s led to the situation where we’ve been able to keep the cost of tuition as moderate as we have at the university,” Carter said.

“Something I still feel very strongly about … is the importance of a very, very strong liberal arts education,” Carter said. “How do we find a way for young men and women to continue to come to this university, irrespective of their ability to pay? One thing that is abundantly clear to me, though, is that the solution to the funding challenge isn’t continuing to raise tuition.”

Reflecting on his time at FMU, Carter said, “I couldn’t be more appreciative of the way, not only of the way students on this campus have accepted me as the president of the last 12 years, but of the way they have embraced my family.”

Carter also expressed his passion for interacting with FMU students.

“I enjoy seeing students; they’re never an intrusion on my day,” Carter said. “They’re the reason I’m here. If there’s a student who has a problem or an issue, come and see me. If there’s a student who just wants to come by and chat, come and see me. There’s no better way I can spend my day than talking with students, especially talking about their dreams and aspirations. Well, there might be one better way to spend my day, and that is trying to find ways to attend here less expensively by finding additional money. If there’s someone who wants to come chat with me, I’m always open, always available.”