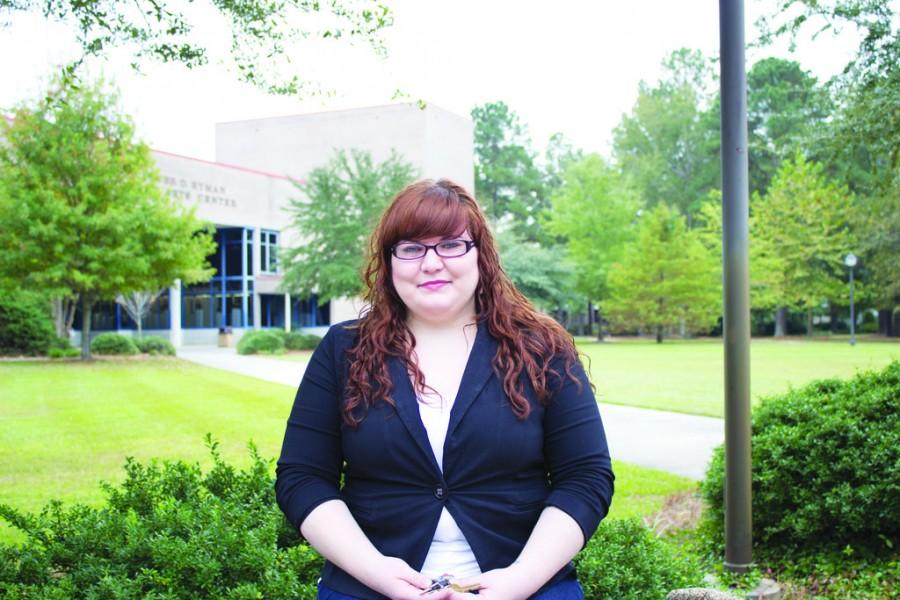 Professor Kimberly Turner joined the English faculty at Francis Marion University (FMU) and began teaching in the fall semester of 2013, but she had previous experiences interacting with the students and staff before that.

Turner obtained her Bachelor’s of Art degree in English with a concentration in literature at FMU where she completed an independent study on the Grimm fairytales, focusing on how women cooperate with each other and are represented in the stories.

After obtaining her undergraduate degree, Turner attended the University of North Carolina in Charlotte (UNCC) where she received a Master’s of Arts degree in English, also with an emphasis in literature.  As she worked on this degree, she also completed extended course work in gender studies.

Turner started developing her teaching skills early on by tutoring in the writing centers at both FMU and UNCC as well as teaching a course in her final year at UNCC.

However, she said becoming an English professor was not her first career plan.

“I was convinced that I was going to be a Broadway star, but I didn’t like going to rehearsals,” Turner said.  “I switched to English because I liked reading, writing and looking at how women and sex were shown [in literature].”

Turner believes that her interests in Broadway and literature grew from her interest in fairytales.

“I grew up reading and watching fairytales, so that interest developed early,” Turner said.   “I was attracted to ‘Cinderella,’ ‘Peter Pan,’…then I realized that you could put music to it, and that made it even better.”

Later, when her interests switched to English literature, Turner said she also realized that myths and lore play a large part in the fairytale genre.

As a teacher, Turner said she strives to connect with her students and to give assignments that they will enjoy working on.

“I try to be my natural self in class and to not put on a ‘teacher face,’” she said.   “I’m constantly trying to make myself better.  I think I work hard and try to make [class] interesting for the students.”

To do this, she tailors her classes to meet the specific needs of the students and their writing levels.  In her English 112 and 200 courses, Turner said she incorporates popular culture like “The Big Bang Theory” and current events.

For her Eng 200 courses, Turner’s final assignment is usually a large project instead of an additional paper.  Turner said she does this in the hopes of taking away some of the stress and anxiety.

“At the end of the semester, [the students] take all of the research they’ve done and create a non-public project,” she said.   “Students have turned in creative writing, medical pamphlets, PSA’s, songs and I’ve even had one girl do a trailer for a horror movie.  It was actually scary.”

In the future, Turner said she would like to pursue a Ph.D. in English literature, perhaps at the University of South Carolina or a different southeastern college such as North Carolina or Georgia.  She also plans to continue teaching and would like to teach creative writing and literature courses as well as courses focused on gender studies.

In addition to teaching and pursuing a third degree, Turner also said she would like to publish articles about popular culture in literature and, one day, a creative novel.   This year, she will have a chapter entitled “Queering the Single White Female: ‘Girls’ and the Interrupted Promise of the Twenty-Something” published in “‘Girls:’ Questions of Gender, Politics and Millennial Angst,” a collection of essays about HBO’s popular show, “Girls.”