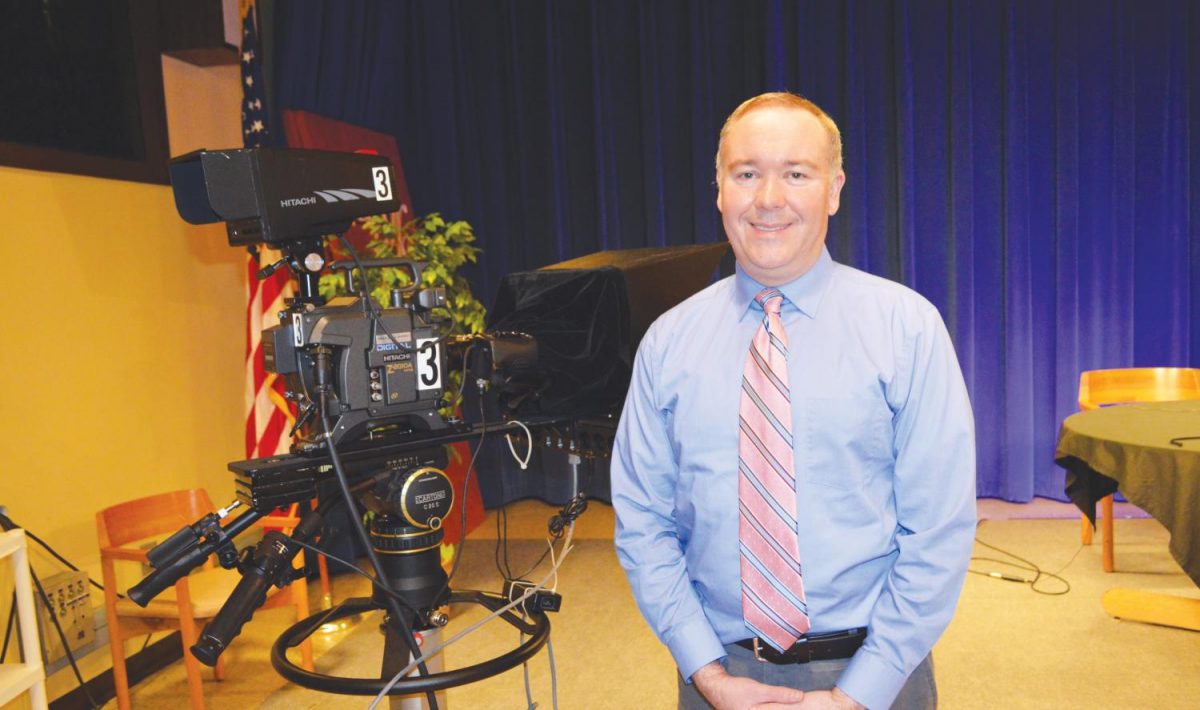 Professor David Baxley hopes to help students pursuing a career in journalism. He is the faculty advisor for the Student Media Association.

Journalism has always been in the front of Assistant Professor of Mass Communication David Baxley’s mind. In fact, for a high school English assignment on “Knights of the Round Table,” he gave himself the name “Sir News-a-lot.”

As early as elementary school, Baxley said he knew he wanted to work in the news industry.

“I think I’ve always loved journalism and news,” Baxley said. “I can remember back when I was in elementary school, watching television news and anchors, thinking I want to work in news one day.”

Baxley said by the time he was 12 years old, he was sure he wanted to work in television news. Throughout high school, Baxley began taking steps to pursue his dream of being a broadcaster.

“While some people were watching movies and hanging out with their friends and going to parties and going to football games, I was coming home watching the [evening news],” Baxley said. “I always made sure that I watched the news.”

As a 16-year-old high school student, Baxley began interning at a local news station in Birmingham, Ala.

“I enjoyed doing it,” Baxley said.

He said his work there allowed him to make connections in the broadcasting field that helped him in the future after college when he was looking for jobs.

“It wasn’t the greatest paying job, but it was a building block to move ahead,” Baxley said.

He went on to work in different positions in a newsroom such as assistant producer, producer and meteorologist. The only position he has not yet held is the sports anchor position, according to Baxley.

Baxley said although journalism was not necessarily a high-paying job, he loved it, which is why he stayed in the field.

Baxley said that after 17 years of working in the journalism field, he wanted focus on doing something for others rather on his own career.

“At some point, I told myself there is more going on in life than me and being satisfied with journalism,” Baxley said. “I want to help other people. What better way than to teach students here at FMU who are interested in broadcast journalism?”

Since coming to FMU in the fall of 2016, Baxley said the most enjoyable part of his job is helping students find their passions and pushing them to reach their full potential.

“If I can change one or two or three lives, that’s what matters,” Baxley said.

Last year, while Baxley still didn’t know many people at the university, he said he met Diamond Hunter, a mass communications student who graduated in the spring of 2017. She came to Baxley seeking help with improving her work.

Baxley called the assistant news director from WMBF News in Myrtle Beach, S.C. to meet with Hunter. Hunter began interning at the news organization during the Spring 2017 semester and is currently employed there.

According to Baxley, seeing a student succeed the way Hunter did is what teaching is all about.

“To me, that is what I would consider a success,” Baxley said. “I want to see these students succeed and get out into the working world.”

Baxley also said he enjoys teaching because he wants to teach students about the importance of journalism.

“Journalism opens our eye to the things that are going on in our nation, in our community and around the world,” Baxley said. “I try to tell my students sometimes it is going to be difficult. To me, that gives them all the more reason to go at it vigorously to uncover what is going on in our government.”