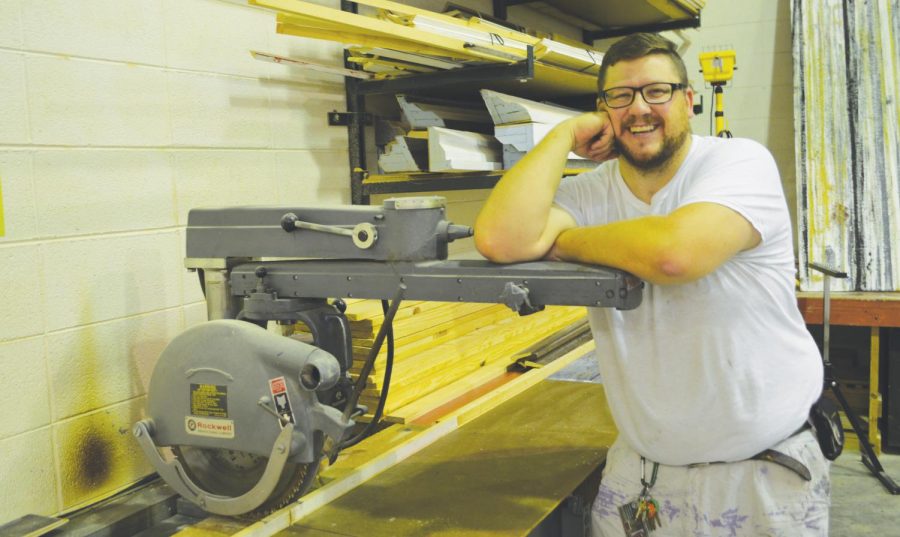 Assistant Professor of Theatre Arts Jared Cole combined his love for theatre and passion for teaching while working with FMU students on the production “Love/Sick,” which was performed for three days in the Hyman Fine Arts Center.

Cole said his responsibilities in the play were designing scenes and lighting sequences and the implementation of those designs. He also worked as the technical director.

Cole said during the “Love/Sick” production, he introduced turntables to the FMU theatre department, which are part of a turning mechanism that helps make scene changes faster. He said the idea has been present in theatre for many years, but this is the first year that it has been used at FMU.

“It’s not necessarily a new technology, it has been used for hundreds of years,” Cole said. “It’s just the first time we have used it here.”

Cole said he came to FMU this year for new job opportunities to display his love of theatre.

“I was looking for a tenure-track design position, and they had one available here,” Cole said. “I sent my application in, and one thing led to another.”

Before coming to FMU, Cole said he worked at seven colleges, primarily under one-year contracts.

According to Cole, he has helped many students with productions by building sets, which he said is his favorite part about being a professor. At FMU Cole said he has help from a working crew, which is not present in many other theatre departments.

“I have been at some schools that were short-staffed, and things I wanted to do I did not have the time for because of the crew I had,” Cole said.

Cole said before becoming a professor, he worked in a professional theatre as a designer, technical director and carpenter. According to Cole, he began working in the theatre business by building sets in Michigan.

“Somebody asked me if I knew how to design a set, and I said I would give it a try,” Cole said. “I found out I had some talent with it, so I went to graduate school to study design, which led me to here.”

Cole said he was exposed to theatre early in life because his mom directed plays. Whenever she needed kids for the plays, he and his older brothers were recruited. He said being in plays at a young age made it a natural transition for him to work in theatre.

According Cole, the best thing about being involved in theatre is the constant change and challenges.

“It’s not always doing the same thing over and over again,” Cole said. “The process remains the same, but the process of how you do it changes.”

Cole said he would recommend that students who aspire to work in theatre read books about theatre to find ideas on creative processes. Cole also said having experience is very important for students’ creativity and skill to grow.

According to Cole, he enjoys working at a liberal arts school such as FMU because he believes they provide more opportunities within the theatre and drama departments.