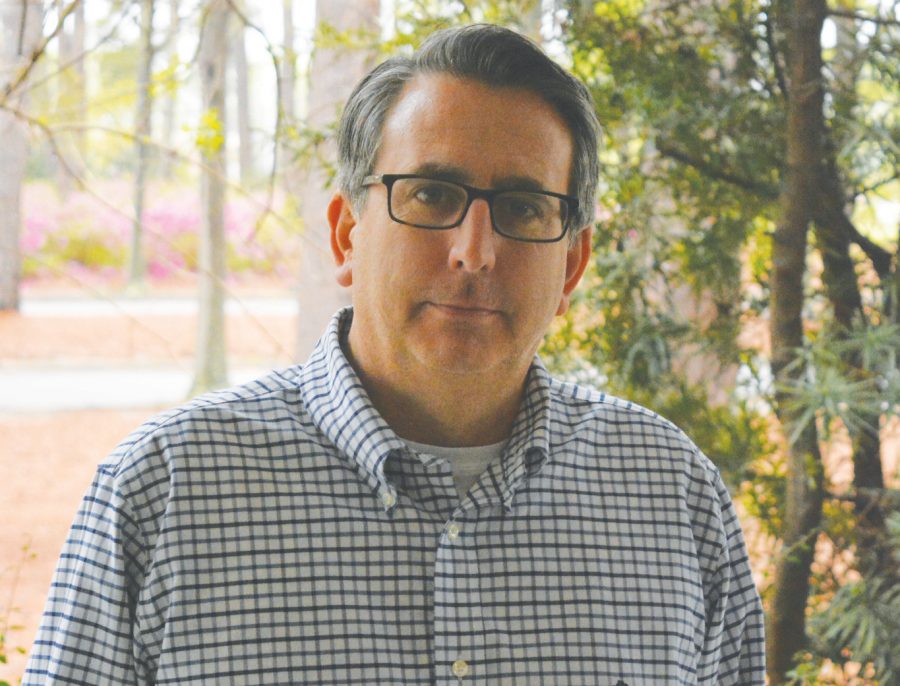 The newest addition to the Department of Mass Communication Stan Diel has worked at eight different newspapers across the U.S. before beginning his career in academia.

For Kansas native and Assistant Professor of Mass Communication Stan Diel, the decision to become a professor for FMU was one of the easiest decisions he’s ever made.

Diel received his bachelor’s degree from the University of Kansas in economics in 1989 and bachelor’s degree in journalism in 1991 from  University of Kansas’ William Allen White School of Journalism. After graduation, Diel worked at eight different newspapers and spent more time working and living in Birmingham, Alabama than anywhere else throughout his nearly thirty-year journalism career.

According to Diel, he has had an exciting journalism career, but there is something else he is passionate about other than writing.

“When I was a kid, we had a darkroom in the basement,” Diel said. “My brother and I shot a lot of black and white film. It was a hobby when I was a kid. I got away from it and would rarely shoot for my own news stories. I got back into photography when I realized page views were becoming a driver of salaries in journalism, and photographers were getting page views from photo galleries. That’s when I declared myself a professional photographer.”

While working in Alabama, Diel said he befriended a local homeless man, James Griffin, who lived mostly beneath interstates in Birmingham in a tent which was given to him. Diel said he was one of many downtown Birmingham residents who formed a close relationship with Griffin. According to Diel, Griffin worked odd jobs for people around town, such as the brother of Governor Don Siegelman or washing people’s cars and was not the man who he appeared to be to those who knew him.

According to Diel, everyone who knew Griffin, who chose to live as a homeless man, thought he was a good person and most people would look after him. Diel said he used Griffin as a subject for one of his photographs and roughly a month after the photograph was taken, Griffin was found dead.

Diel said one of his favorite stories from his journalism career was a feature he did on a man who converted his pick-up truck to run solely on chicken feces. According to Diel, the man was a high school drop-out, but one of the most intelligent men he had ever met. Diel said the man was invited to be a guest speaker for academic conferences because of what he did to his truck.

Diel said once he spent about an hour with the man, interviewing him and looking at his truck when the man asked him if he would like the chance to drive it. Diel said once he got behind the driver’s seat and put his foot on the gas, the two were going about 85 miles per hour when the hood popped up after hitting a bump.

“I immediately thought, ‘I am going to die,’ and right after that I thought, ‘I have the best job in the world,’” Diel said. “We survived and I got a fun story out of that. I tried to do as many fun, quirky stories as I could; I had more fun doing stuff like that.”

According to Diel, he was still working as a columnist when he decided to go back to school at the age of 45. Diel said he went back to night school while still working at the paper to pursue his master’s degree. After receiving his master’s, Diel said he applied to The University of Alabama’s Ph.D. program not expecting to hear back from them. Diel said, to his surprise, they offered him a full-ride to the university plus a stipend after explaining to them they were familiar with his work as a journalist.

Diel said going to school to get your Ph.D. is not something you can do part-time, so he left the paper to pursue his final degree.

“Apparently they read the paper and were familiar with my work and knew who I was,” Diel said. “They asked me to interview and offered me a full ride plus a stipend. I began the Ph.D. program after I quit the newspaper. It’s not something you could do part-time. It was very challenging. It was the hardest thing I’ve ever done, but one of the most rewarding things.”

Diel said after he graduated from the University of Alabama, he came to FMU for an interview. Diel said after asking some students why they go to school here when his tour guides weren’t looking, his decision to join the Patriot family was very clear.

“What they told me was that they were going here because they wanted to achieve their goals,” Diel said. “I was very impressed by the students. Between that and the people I met here that are faculty and in administration, I was sold.”

Diel said he feels very much at home at a small, liberal arts school and FMU is a good fit for him.