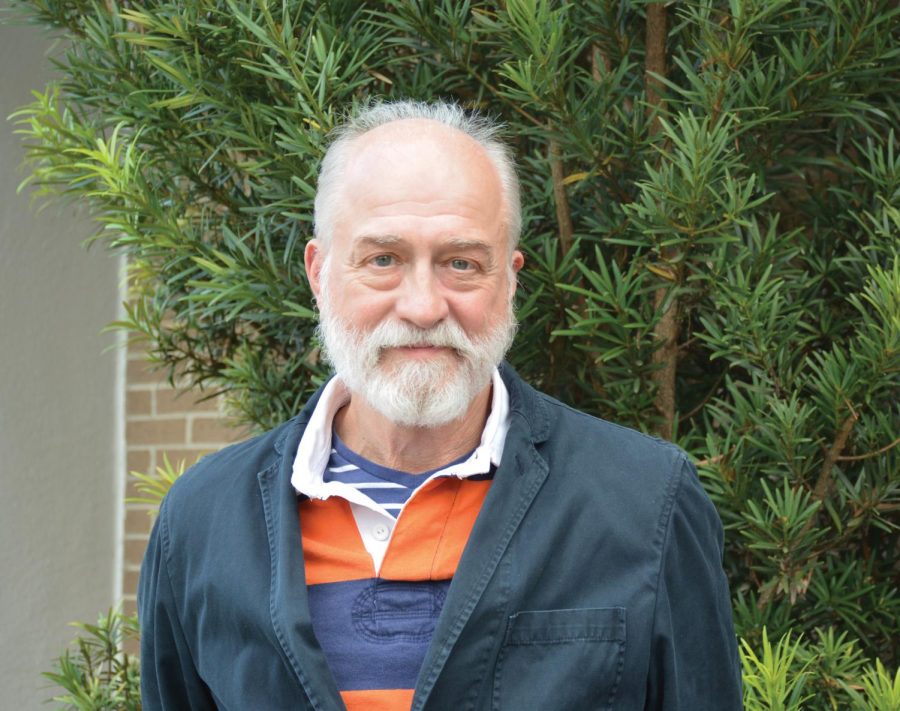 Blackwell, a professor of philosophy and religious studies, has been a part of the FMU family since he was a child.

Mark Blackwell, professor of philosophy and religious studies, has been part of FMU for many years. He was born in Columbia and grew up in northern Virginia, but he made sure to keep in touch with his family in South Carolina.

In Blackwell’s early years, he discovered a proficiency in athletics, particularly running track and football.

“I was fortunate to have some athletic ability and to recognize it while I was young,” Blackwell said. “My parents just always thought that their children would figure out what to do. I was fortunate enough to know from a very early age that I was always faster than anybody that ran against me because I always won little ribbons.”

Blackwell said no matter the sport he played when he was younger, speed was his strong suit.

“Speed was always there for me to use to my advantage,” Blackwell said. “I was running when track was a big deal in America and was moving out of the amateur phase and into the professional. I went to college on a track scholarship and played a little bit of football at the time as well. I didn’t really have a plan for not being successful in athletics and when the ability to compete became more difficult because of an injury, I had to figure out what to do. That is when I began to focus more on my academics.”

Blackwell went to college in Virginia and received a degree in writing. After graduating, he spent a decade working in marketing for architectural engineer planning companies and for government contractors.

“I went straight into the corporate world after college with my degree in writing,” Blackwell said. “It was never easy to write, but people in high school and university said that whenever I gave an effort it was very good, but that was never very consistent. Language is fascinating, and words are fascinating to me. I always played with words and puzzles and studied French.”

Blackwell said he got involved playing jazz in Washington and from there he went to study guitar in a very good music program while at seminary. He went to Sheffield University in England to get his doctorate in Biblical studies.

Blackwell’s involvement with FMU started as a child when his father worked as a contractor for the university.

“As a boy, I would walk around with my dad when they were building the library in 1972 and I think the University Center was in 1974,” Blackwell said. “For that reason, I was always aware of FMU when Lisa, my wife, and I moved back from England where I was working on my doctorate.”

Blackwell said that when he was back in South Carolina job hunting, FMU came back to his mind. After Blackwell got settled at FMU, he was asked to be a part of the international student exchange program.

“I sent an email to UNCW, Costal Carolina and FMU,” Blackwell said. “Within a day I received a response from FMU asking if I would come up and speak to one of the philosophy professors. The international programs here at FMU has developed since it’s been here, and it continues to grow.”

Blackwell said he was chosen to take a leadership position in the international program  because of his time in England while working on his doctorate.

“The mission from the beginning has just grown,” Blackwell said. “The president and all the coordinators have just done such an extraordinary job. Our goal is just to get as many students abroad as we can. We have very modest entry requirements. We supply funding opportunities for students and grants.”

Blackwell said he has seen FMU evolve as a result of the exchange program.

“President [Carter] appointed me the liaison for the university of our British partner having lived in Britain for some time, and our connection there is in Leicester, which is 30 minutes from where I used to live,” Blackwell said.

According to Blackwell, the program has succeeded because it allows students to learn and experience things outside of a typical education.

“I think our administration is very adept at finding people’s skills and gifts and allowing them to flourish,” Blackwell said. “I don’t think they are in the business of offering opportunities where they will fail, but they are always offering opportunity for us to grow and our students to grow.”