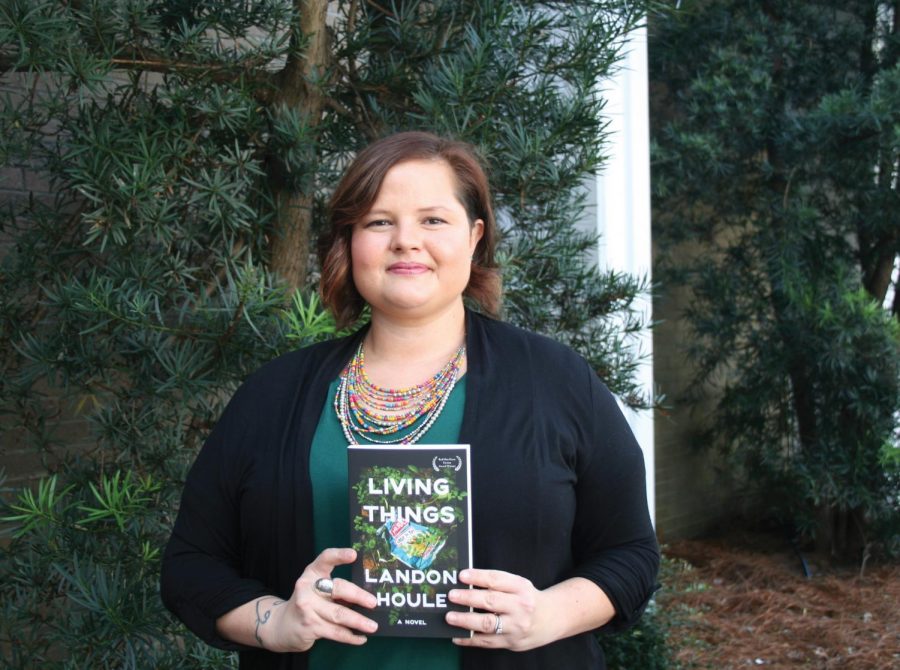 Houle, an assistant professor of English, said FMU allowed her to express her love for creative writing and literature.

For Landon L. Houle, assistant professor of English, being a part of FMU has allowed her to make the most of her love of literature, creative writing and working with students.

Houle said when she was in the second grade, there was an academic competition that was offered as an alternative for people who wanted to pursue something other than sports, which were a big part of the culture in Texas, where she grew up.

“It made it a fun camaraderie between people who are interested in the same thing,” Houle said. “I can remember one of those first competitions. They handed out the prompt and it was pictures. One of the pictures was a set of keys, and I wrote this story about how my mom was always losing her keys or something like that. That’s the first story that I really remember writing in a concerted way. So, I kind of just kept doing it and I wrote on my own time.”

Houle also said she discovered her interest in teaching during that time because of her appreciation for her teachers.

“I remember admiring my teachers,” Houle said. “At the end of the year, the teachers would often clean out their desk and all that stuff. In elementary school, a teacher threw away a literature book with answer keys. It was in the trash can, and I remember sneaking it into my backpack. I remember taking it home and playing with that a little bit and seeing what it would be like to have the answers and ask questions. So, I guess teaching has always been something I thought about. It seemed like the natural path.”

Following that path, Houle earned her bachelor’s degree in English from Sul Ross State University. She stayed there to earn her master’s degree because she graduated in three years and wanted to spend more time there before moving away to another school. During that time, Houle said she continued thinking about her writing while working on her studies. She was able to combine them for her thesis, writing her first collection of short stories. Afterward, she was accepted into the fiction program at Texas Tech University, where she earned her Ph.D.

Throughout her studies, Houle found her niche in Southern literature, feeling a sense of identification with its authors.

“I relate to Southern writers and also female writers like Dorothy Allison and, more contemporary, like Barb Johnson,” Houle said. “I feel like you see yourself and your experience in their writing and I think I followed along with that. That’s kind of been my home.”

After graduating, Houle said she faced the dilemma of relocating for work while wanting to remain close to her husband. Fortunately, however, two positions in the English department at FMU opened up, allowing Houle and her husband to work together.

Houle said teaching English and creative writing classes has been fulfilling in terms of her own work and seeing students’ ideas and progress.

“That’s exciting,” Houle said. “You’re seeing somebody evolve and change right in front of you. It’s inspiring too.”

According to Houle, part of the job description included co-coordinating FMU’s annual Pee Dee Fiction and Poetry Festival, which features notable authors who read and discuss their work. Houle said the festival has been a rewarding experience for both students and faculty.

“It’s such an opportunity for the students but it’s also an opportunity for the faculty members that you wouldn’t get anywhere else,” Houle said. “I really enjoy working closely with the writers. It’s a really important experience for you to be around these people who have these accomplishments and are doing what you want to do.”

During her time with the festival, Houle once had to fill the place of one of the featured writers who could not make it. She read her work and one of the other writers, Dan Chaon, was so impressed that he said he would write an advance review of the book for when it was published, because he believed it would be well received. Her novel, “Living Things,” was published last month. Houle was given a publishing contract when she won the Red Hen Press’ annual fiction contest.

Houle said working on the book was part of a process of learning to balance her creative writing life with teaching. Now, she is working on arranging public readings of her novel.