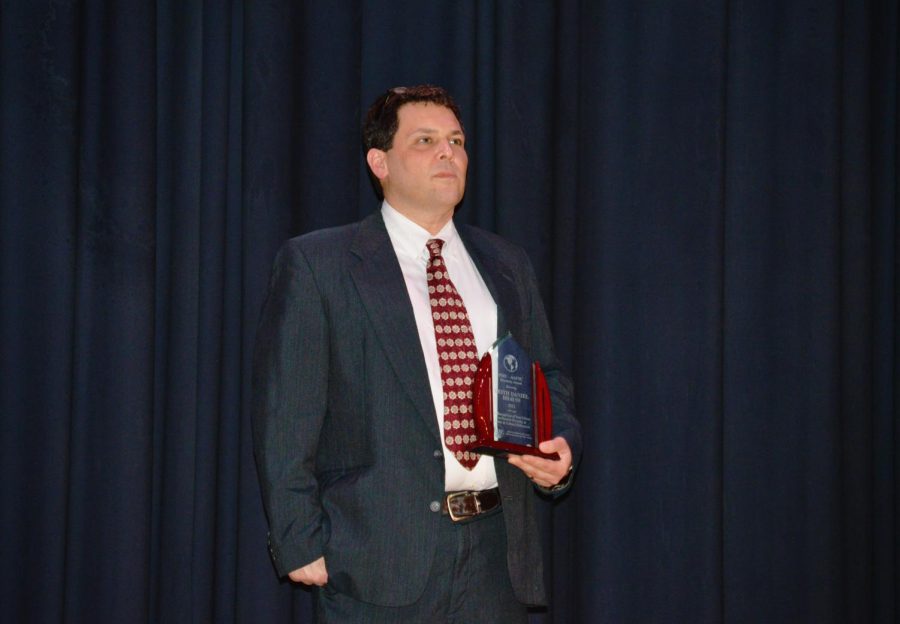 Professor Daniel Brauss holds the Diversity Award for his dedication to inclusivity through mathematics.

A native of St. Louis, Missouri, Daniel Brauss, professor of mathematics, was honored with the African American Faculty and Staff Coalition 2021 Diversity Award at its 25th anniversary celebration.

“Receiving the Diversity Award was one of the best moments I have had here so far,” Brauss said.

Brauss is not only dedicated to teaching students about math, but he wants to foster opportunities for STEM students to experience diversity firsthand.

Since 2018, Brauss has been helping to organize STEM-related math trips geared toward diversifying the STEM field.

One of the first trips he organized was to the Society for Advancement of Chicanos/Hispanics and Native Americans in Science (SACNAS) conference in San Antonio, Texas.

From the time he became an FMU professor, Brauss has been working to give students new and different perspectives.

“Getting to take students to the conference in San Antonio was the first time being able to leave South Carolina and catch a flight, and they were so happy,” Brauss said.

Not only is diversity important to him on the collegiate level, but also among younger students.

He said the math department does some international traveling with students to Belize, where they conduct research and community outreach.

“We can’t really beat the opportunities we’ve had to take students abroad and to other places in the U.S.,” Brauss said. “These were great opportunities and we’ve had lots of fun doing them with the students.”

One of the most recent accomplishments was his involvement in a group of math professors who were able to create a supplemental instruction program that gives students the opportunity to gain experience in introductory math courses.

This year will be the second year they have been able to keep operating the program.

Brauss’s love for mathematics began a long time ago, but it really surfaced after his senior year at Clemson University.

Brauss said the course he took that year really dove into the deep end of what he began to love about math.

Upon graduating with his bachelor’s and master’s degrees from Clemson University, Brauss got a job in the chemical engineering field.

After working in the chemical engineering industry for more than a year, he decided to return to school and pursue a master’s in mathematical sciences. Before becoming a teacher at FMU, Brauss was a math teacher in Belize, where he and his wife, Minerva Brauss, a fellow FMU math professor, lived for some time.

Brauss and his wife began working in the math department at the same time, and he said they enjoyed the welcoming atmosphere.

“Since our first days at Francis Marion, my wife and I both remarked upon the exceptional level of light and compassion extended by the faculty and staff,” Brauss said.

Brauss said the acceptance that he and his wife received from the faculty and staff showed them how important diversity was to the school.

“It was this inclusion that we observed from our first day – understanding, accepting and valuing the differences between people – that continues to attract us at Francis Marion,” Brauss said.

Brauss has worked tirelessly to enrich students’ knowledge of math and diversity at FMU as well as in the world.

“My wife and I like to share our time with the students through research and immersion experiences,” Brauss said.

Brauss and the math department have many more plans to immerse students in diversity and STEM in the future.