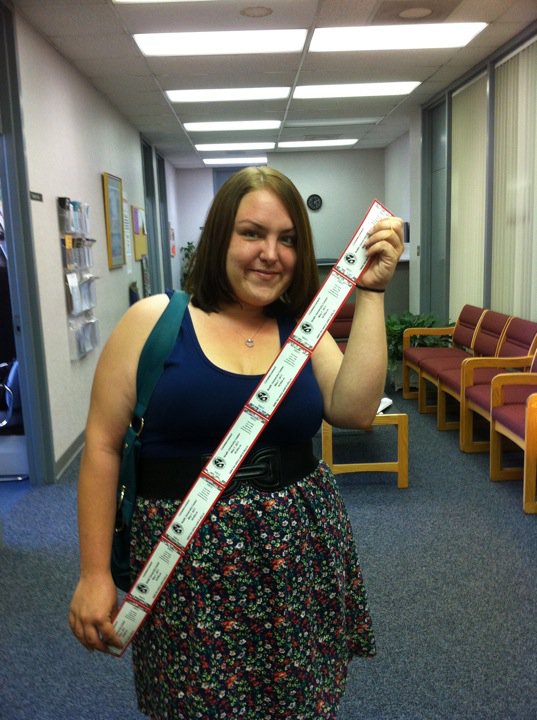 These days, most college seniors worry about not being able to secure a decent job after graduation. That wasn’t a problem for recent Francis Marion University graduate Amanda Morales, who landed a job at Arkansas State University (ASU) before she even walked across the stage last May.

While working as a resident hall director at ASU, Morales is also pursuing a master’s degree in College Student Personnel Services, which she said will allow her to work in a university’s student affairs, housing, admissions or financial aid department, among other things.

“I realized that I wanted to gain a career in student affairs around spring 2010,” Morales said. “At that time I was very involved at FMU, and I felt that it would be a great career for me to pursue—though if you ask my mother she would tell you that I just want to be in college for the rest of my life.  But when you look at it, is that really such a bad thing?  I honestly had the time of my life at FMU. I built great relationships, was involved in many organizations, was able to be a part of the creation of a few traditions and much more.”

During her time at FMU, Morales involved herself in so many activities and organizations that she even has trouble keeping track of them all. She served as the president of the University Programming Board, Sigma Tau Delta English honor society and Omicron Delta Kappa leadership honor society. She was also the director of the Leadership Conference two years in row. Morales worked as a resident adviser for three years and also found time to join Zeta Phi Beta Sorority, Inc. – and the list goes on.

Morales, who graduated in May 2011 with a Bachelor of Arts in history, said that she began getting more involved on campus during her sophomore year and ended up being involved in more activities than classes.

“I loved being a part of a group and making a difference on campus,” Morales said. “And I think as a first generation college student, I really felt like I had to go that extra mile to show that I could succeed at college. Plus, being involved in extracurriculars is a great way to meet people and gain experiences.  I truly believe that the college experience involves more than just what happens in the classroom, so I always took advantage of any opportunity to be involved that came my way.”

Morales credited the experience she gained and the people she met through her activities as primary reasons why she was able to find a job relevant to her career aspirations.

“During my last year at FMU, Dean Ramey told me about the Southern Placement Exchange,” Morales said. “It is a conference of sorts where undergrad and graduate students interested in student affairs with a background in housing could mass interview for graduate assistantships in the field. My interview with ASU went very well, and last March ASU offered me a position on their staff as a graduate hall director.”

Because Morales consistently stayed busy with student events and organizations, she spent a lot of time on campus, making her face a familiar one at FMU. She met many of her fellow students through her participation in campus events.

Alyssa Hardy, a junior majoring in mass communication, became friends with Morales when she took over as the assistant director for the Leadership Conference, which Morales made an annual event.

“Working with Amanda was an incredible experience,” Hardy said. “Her drive and determination for success was inspirational to me, both personally and in my college career.  Even though she is now a graduate student in another state, Amanda continues to inspire me with her strong work ethic, and through her, I have learned that with the right amount of skill and perseverance, anything can be achieved if someone works hard enough.”

“I would point to two key figures who influenced me the most,” Morales said. “Dr. Linda Jacobs is one of the greatest people I know; she was always there to support and help me in any way I needed.  She is so caring, and I have come to love her over the years. Dean Ramey was also an inspiring figure to me during my time at FMU. I had the valuable opportunity to work with her in a variety of ways, and she’s one of the primary reasons I am now pursuing a Master’s at ASU. She has been a great mentor to me, and I will always look up to her as a leader in the student affairs field.”

“Amanda is a lady with spunk,” Jacobs said. “She is a feisty, hard-worker and a tremendous organizer. I look at her as a borrowed daughter, since she has a mother who loves her very much. She gets along with everybody and has friends from all sectors.”

Morales said that she initially had trouble adjusting to the new, larger campus and lack of familiar faces, but she is now getting more used ASU and the city of Jonesboro. She also said that she misses FMU.

“I feel that I received a very good education while at FMU, and my involvement in student affairs definitely enhanced my marketability during my job/grad school search,” Morales said. “FMU has such a supportive environment for students to evolve and succeed. The faculty and staff really do a great job in preparing students for future success.”