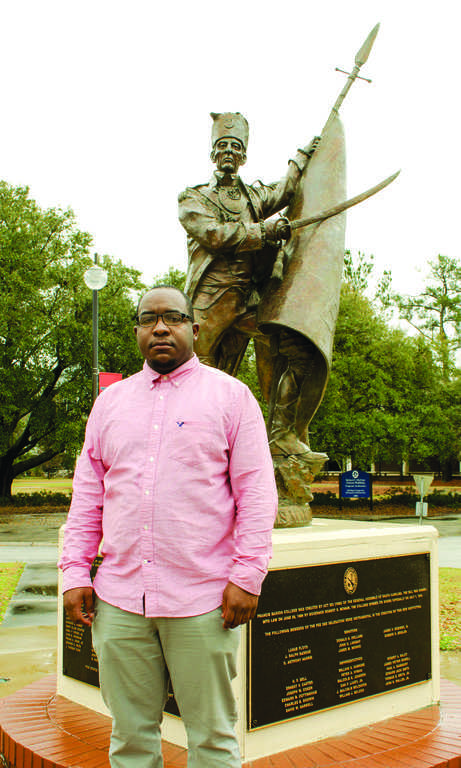 After graduating from FMU in 2014, LaQuaan Malachi used his history degree in a less traditional manner and enrolled in Candler School of Theology at Emory University in Atlanta, Ga.

Growing up in Bennettsville, S.C. with very few resources, Malachi became an independent and self-reliant person at a young age.  At only 17 years old, he enlisted in the U.S. Army.  He enrolled at FMU to pursue his dreams of becoming a commissioned officer after graduation.  Shortly after starting school, he discovered that he was being pulled in a different direction: ministry.

Malachi began attending Alive in Christ Student Ministries and was a very active member in the community.  During his senior year at FMU, Malachi became the president of that organization and solidified his passion for ministry.  He completed several hundred hours of volunteer work and community service, which included building homes, serving lunches and mopping floors.  He never turned down what others asked him to do. Malachi said he tried to complete each service project with a smile and a huge heart.

“One day I realized I loved others more than I loved myself,” Malachi said.  “Ministry is the most rewarding career that exists.  I help people connect with God each day, and it is the best way to change the world one person at a time.”

With a heart for helping and a need to learn more, he made a brave decision.  With no money, no vehicle, no apartment and with little idea of how to pay for four years of seminary, he packed his bags and headed straight for Atlanta.  He was able to find an apartment with several roommates and secure loans for his future.

Although he has pursued a different route than he originally planned, Malachi is still utilizing the knowledge he gained in his history courses at FMU.

“FMU’s small class sizes were influential in helping me learn how to think and not what to think,” Malachi said.  “My history classes were imperative to my future as a minister.  My knowledge of history forces me to be honest about the history of Christianity even when it is uncomfortable.”

Malachi said he gets his inspiration and motivation from the people that he meets every day and lives by the motto of, “Do what you have to do so that you can do what you want to do.”  He also finds inspiration in Tupac.  Malachi often refers to when he was a child and listening to the lyrics of rapper Tupac thinking, “If this guy can do it, then so can I.”

Malachi also enjoys other activities outside of ministry and community service.  He is a competitive weight lifter and enjoys poetry and writing.  Several of his pieces have been published in Snow Island Review, a literary journal at FMU.

“The biggest problem facing the church today is loving our neighbors,” Malachi said.  “We fail in how we treat marginalized communities like different races and the LGBT community.  Accepting everyone without being judgmental is what Christ said to do in order to live out his love.”

Malachi currently teaches Sunday school and works at the Lee Arrendale State Prison for Women.  He spends his days listening to and talking with women who have committed crimes as well as women who have been the victims of those crimes.  He makes a point to serve his community without discrimination and to love everyone equally.  He and several other students collected signatures from clergymen in an attempt to postpone the execution of one of the detainees, Kelly Gissendaner, but ultimately her execution was postponed due to a problem with the drug.

Malachi recently received a position as the ministry leader at Yellowstone National Park for the summer.  He plans to live out the love of Christ and serve the people of his community for as long as he possibly can.  With no intentions of slowing down, Malachi is working to make this world a better place for all people, one service project at a time.

** Retraction: The original publication of this article stated that Malachi’s collection of signatures directly impacted the postponement of the execution and that he would be a leader at Yosemite National Park; however, the errors have been corrected, and we apologize for the inaccuracies.