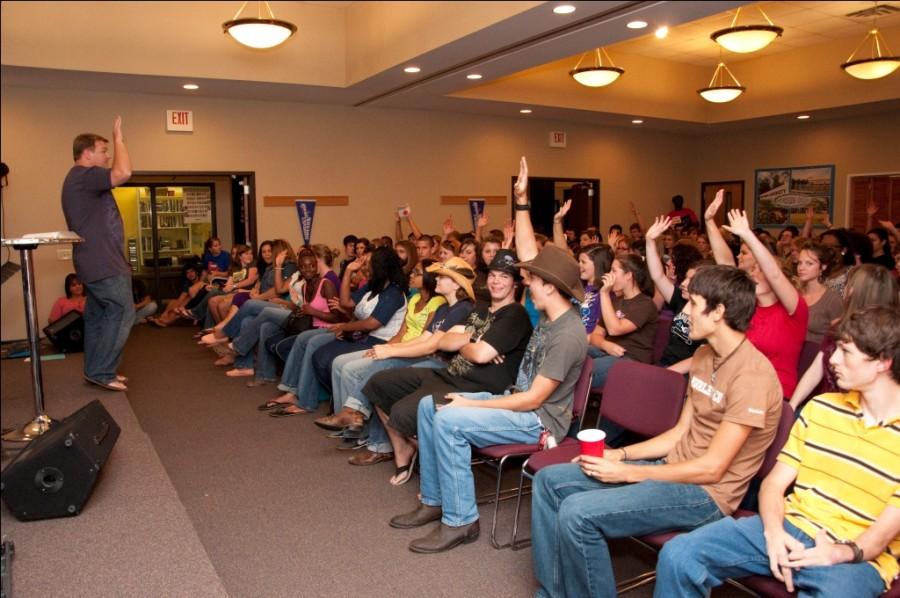 The Baptist Collegiate Ministry (BCM) has decided to go by a new title of significant meaning.

The meetings held in the BCM building are now being called “153.” The first weekly 153 meeting was held on Tuesday, Aug. 31, at 7 p.m. There were approximately 160 people in attendance that night, creating a packed house.

Why 153? The idea came from a biblical passage in John 21. Verses 1-6 talk about how six disciples decided to go fishing one day, but didn’t catch a single fish. Jesus instructed the disciples to cast their nets out again. It was so full of large fish – 153 of them – that the net was torn while they were pulling it in.
Many claim that there were only 153 species of fish in the sea at that time in history. Some argue saying that the net held just 153 large fish, while others believe that they caught one fish of each species.

“Essentially we are trying to reach people of every type of background because we believe that all people are welcome at BCM,” McLellan said.

Kendal Danford, BCM’s 153 campus pastor explained the vision of the organization.
“BCM exists to reach every college student on our campuses [Francis Marion and Florence-Darlington Technical College] and help them become lifelong disciples of Christ who impact the world with the Gospel,” Danford said.

Beginning every Tuesday night, free food and drink is offered to all who enter the doors. On the first night, the church of FMU alumni Grant and Megan Lyerly brought barbecued pork chops, rice, green beans, sweet tea and lemonade.

Next Tuesday at 7 p.m. another church will bring food. Around 8 p.m. the dinner tables are stowed away and the chairs are lined in rows as the group prepares for worship and the night’s speaker.
There were many new faces in the building for the first meeting of the semester. When asked what made them want to be a part of the first 153 meeting, freshman Bri Rainwater and sophomore Erin Ussery had good things to say.

“What made me want to come to the first BCM was because I heard it was a very interesting program,” Rainwater said. “I most definitely with be coming back!”
“BCM is an amazing opportunity to meet people,” Ussery said. “Worship was awesome! I would absolutely come back!”
153 would like to include everyone in their upcoming events.

On Wednesday, Sept. 22 at 7 a.m., 153 is holding its annual “See You at the Fountain” meeting. During this time 153 is inviting everyone to come and pray with them for the students, teachers and faculty on campus.

Sophomore Jennifer Balzer expressed her excitement about the bible studies that BCM will be holding during the semester saying, “I can’t wait until BCM starts the bible studies,” Balzer said. “Being an older student and always going to church, I need something that will keep me focused on Christ. I am looking forward to seeing what God has in store for the students at FMU.”