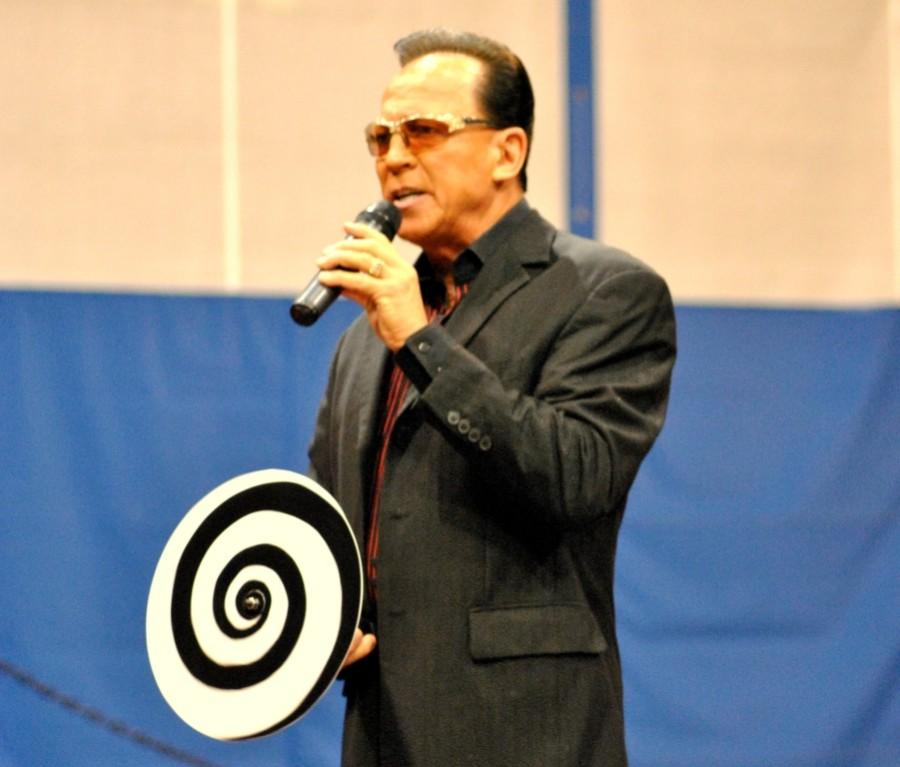 The University Programming Board (UPB) has sponsored Dr. Jim Wand for the past ten years that he has performed his hypnosis show at Francis Marion. Currently he is on his fall tour doing 90 shows in 110 days, but out of the vast array of schools that Dr. Wand’s show reaches, he continues to come back to FMU every year.

“I come back here [for] the students … the response,” Wand said. “Not only is the University Programming Board really easy to work with, the students here are extremely receptive. The crowds have grown. [At] the first show I did here, we had 300 students. Last year they counted over 1300 students. So it keeps on growing; it is becoming a tradition.”

The doors to the University Center gym opened at 7 p.m. on Sunday, August 29, and over the next hour a flood of students quickly filled the new bleachers as they waited for Wand to make his appearance.
Wand opened the night with an illusion. He had everyone look into the center of a black and white spinning disk for 15 seconds and then look at his head, which seemed to grow larger.

Wand then took approximately 30 volunteers from the audience and placed them in a long row of chairs. He set up a lighted spinning sphere that, when turned on, spun an array of different brightly colored dots into a mesmerizing dance and became the hypnosis fixation point. People in the audience also got hypnotized and were brought up front.
Then a conga line got everyone dancing. During the course of the evening, a “horserace” took place with the hypnotized parties viewing the race through their “shoe”-noculars.

One girl was led to believe that she won the race and a million dollars, only to find out that her “jockey” had kicked another horse and had caused her horse to be disqualified. She wasn’t happy about loosing the million dollars, and she had a few words and a good shaking for the “jockey” when she got her hands on him.

Senior Ben Miller was given an inflatable microphone at one point and was under the impression that he was Lady Gaga. He was also told he was a bull rider, and he rode a bull balloon animal for a qualifying eight seconds.

Senior Brittney Stevens was tricked into thinking that a balloon man was “Twilight” star Robert Pattinson and that she was to be his escort for the night.

Some of the previously hypnotized people stayed after the show to answer a few questions about how it felt to be hypnotized.

“It was amazing,” Miller said. “I felt like I was in a dream. I felt like everything he [Wand] said to me was just like ‘Ok, let’s go do that … that sounds like a good idea.’ I didn’t notice anyone but him. I knew there were people there, but they were blurry.”

Sophomore Ashley Humphries said that being hypnotized allowed her to lose any feelings of self-consciousness.

“I knew what I was doing, but I didn’t care,” Humphries said.

In a preshow interview Wand disclosed some information on his history at FMU, hypnosis and its uses, who can be hypnotized and what he uses hypnosis for personally.

Wand defined hypnosis as, “moving into the subconscious mind.” He added to that, saying that everybody “has a subconscious, but being able to access it is something that people have a lot of difficulty doing. Even though it is automatically there, if you can learn how to move into your subconscious mind … then that can help direct your conscious mind into making changes.”

Wand said that the main two areas hypnosis is used for are losing weight and quitting smoking. He also listed a few more uses: stopping bad habits, increasing motivation, increasing study skills and memory retention, sleep aids, fears and anxiety disorders, etc. He added that hypnosis can be used to alleviate or block out moderate pain. Hypnosis can also be used for various other medical purposes. He said that daydreaming and “highway hypnosis” are types of hypnosis people use every day without even realizing it.

Wand said that he has never had anyone in a one-on-one session not become hypnotized.
“You do have to use different techniques on different people,” Wand said. “With a crowd [the size of FMU’s] … I use a fixation point because I can capture more people in a shorter period of time. So anyone who wants to, providing the right technique is utilized, can be hypnotized.”

Wand has been called by police officers and forensic investigators to aid in kidnapping cases, murder cases and bank robberies to hypnotize witnesses so that they can recall more details of the crime by utilizing their subconscious mind.

“Hypnosis is unlimited as to what it can be used for,” Wand said.

He uses hypnosis personally on a daily basis.
“When I was a freshman in college, I weighed 220 pounds,” Wand said. “I got hypnotized for weight loss and I went down to 140 pounds and have stayed within 3 pounds of 142 pounds ever since.”

Wand said that he also uses hypnotism in order to block cold symptoms and improve his concentration and focus.

He said that he had recently been in a motorcycle accident in Mexico and was having pain in his right ankle that he was currently blocking out using his subconscious mind through hypnosis.

Anyone who wants to know more about hypnosis or Wand can visit hypnotism.com or hypnosisforstudents.com.