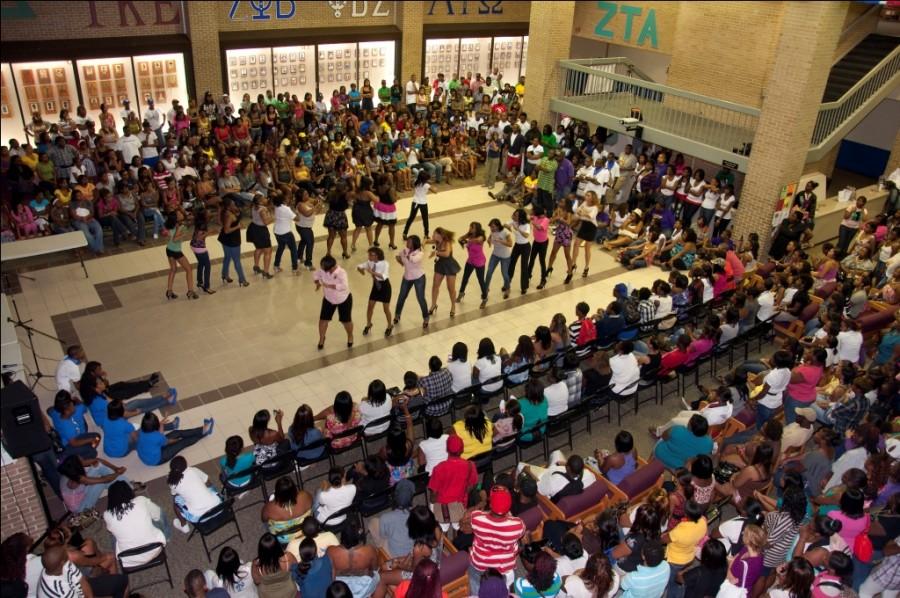 The National Pan-Hellenic Council (NPHC) held its forum/step show on Thursday, Sept. 2. The night began in the University Center with a crowd full of people interested in rushing a Greek fraternity or sorority.

A table was set up with a representative from each of the nine Greek-letter organizations in NPHC.

A few questions were asked to the representatives at the table, and a microphone was passed from person to person while they answered the questions about each topic.

The question-and-answer session at the beginning was mainly to give the audience some insight on what the individual Greek-letter organization stood for, the values and morals it encompasses and what kind of things it looked for in people who were hoping to join.

The floor was then opened for the audience to ask questions.

After a few technical difficulties were worked out, the step show portion of the presentation began with many cheers and loud applause. The high-energy show focused on entertaining the audience and getting people pumped up about rushing their Greek organization.

A lot of planning and preparation goes into these types of events. Steps must be practiced and perfected, outfits must be thought of and made, and each fraternity and sorority does things slightly differently in order to bring their own personal style and energy to the dance floor.

“We practice every week for about two hours, according to our school schedule,” senior Rashi Major, member of Omega Psi Phi, said.

Major offered advice to freshman and others who plan to rush.

“Become active around FMU [by] involving yourself in different clubs and organizations, because being in a Greek-letter organization takes a lot of planning and working with different people on and off campus,” Major said.

Senior and member of Alpha Kappa Alpha, Erica DeJesús, said that she and her sorority sisters “practiced every day until the date of the show.”

DeJesús added that she and the girls in her sorority have meet-and-greets to get people to join.

The show was a success and now many prospective rushers can make a more knowledgeable decision on which organization they want to rush.

“This is one of the many step shows I have been to,” freshman Tim Pierce said. “I am always influenced by the Omegas”.

“I really enjoyed the performance and got a lot of insight on the different fraternities and sororities,” freshman Earth Wactor said. “I was considering joining Delta because I like the sisterhood and the community service.”