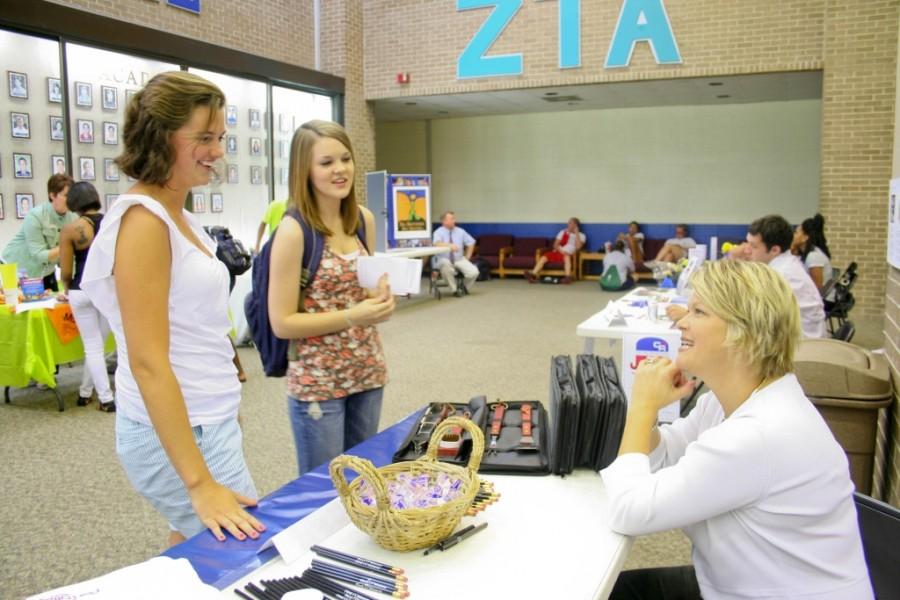 Turnout for the Student Organization, Community and Volunteer Fair held at Francis Marion last week was higher than previous years, indicating an increase in student involvement and a successful joining of what was previously three separate events.

“We were excited about combining the events,” Teresa Ramey, FMU Vice President and Dean of Students said. “Many of the students and organizations are active in community service activities, and the ‘one-stop event’ was a great benefit to our students and community agencies that participated. Student Affairs looks forward to coordinating the event again next fall.”
Students who attended the fair were made aware of a wide range of services and opportunities available to them that they may not have otherwise ever learned about.

Community and student organizations represented at the fair were as diverse from one another as the local chapter of Habitat for Humanity to Hospice to FMU’s American Chemical Society.

Tables lined up throughout the main lobby of the University Center (UC), as well as in the northern section of the gym, were loaded down with freebies and displayed eye-catching signs meant to draw the attention of passing students. Local banks and cell phone companies lured people in with the promise of low or no fees, while local non-profit organizations expounded on the virtues of volunteerism.

Each of FMU’s fraternities and sororities, known for their committed involvement in community volunteering, were represented in high style.

Francis Marion senior JerJuan Kenney-Page, a political science major, is a member of the fraternity Alpha Phi Alpha. Page said that one of the ways his fraternity helps out in the community is by working with children and young men in Florence and surrounding counties. He and his fraternity brothers try to teach those they work with how to make good decisions and grow up learning to help others. Alpha Phi Alpha also helps register voters so that citizens can become an active part of their community.

“You have to give back to your community,” Kenney-Page said. “If you don’t do it, who’s going to? It’s important to teach others to do the same.”

Another Greek organization represented at the fair was the sorority Zeta Tau Alpha, who do most of their community work through their platform of breast cancer awareness. Lauren Balutis, a sophomore majoring in early childhood education, explained how working with her sorority has given her a new appreciation for the difficulties faced by other people.

“Volunteering makes you aware of what people are going through,” Balutis said. “You get to help people on a smaller, more local scale. The more that happens, it grows on a larger scale.”

Many of the tables representing local volunteer opportunities were manned by students who had become involved with the organizations the prior year, showing that events such as this are making an impact in student’s lives.

One such student was Jasmine Williams, a senior majoring in middle level education who was manning the Habitat for Humanity table. As one student after another stopped by to sign up for more information, Jasmine explained why it is so important for students to be involved in volunteering.

“It’s important to get students at FMU involved in something positive in our community,” Williams said. “It’s a really good feeling to help, and also a great way to meet like-minded people.”

In a reverse on asking for volunteers, many religious organizations were on hand to instead reach out to students and offer their help. Ricky Howell, a student organizer with a group called Alive in Christ, said the fair was the perfect opportunity to reach a large number of students at one time.

“We want to connect to students,” Howell said. “We have something to offer, and students need to know about it.”
Another religious organization, known as the Gideons, was on hand to pass out free Bibles to students. Jim Casey, a member of the Gideons, described why citizens in the Florence area are fortunate to have a university like FMU in the county.

“FMU is such an asset to the community,” Casey said. “It gives students who wouldn’t have the ability to attend another school, like the University of South Carolina, the opportunity to graduate from a really good university.”

One way that students are able to attend Francis Marion is through the availability of scholarships like the ones sometimes provided by FMU’s African-American Faculty and Staff Coalition. This group helps students who cannot find enough money to attend college by holding fundraisers and collecting donations.

Francis Marion staff member Linda Kelly, a member of the coalition, was on hand at the fair to inform students about the availability of scholarships for those in need.

“One student didn’t have enough money to complete her last semester of school and graduate,” Kelly said. “The organization was able to help [the student] on an emergency basis.”