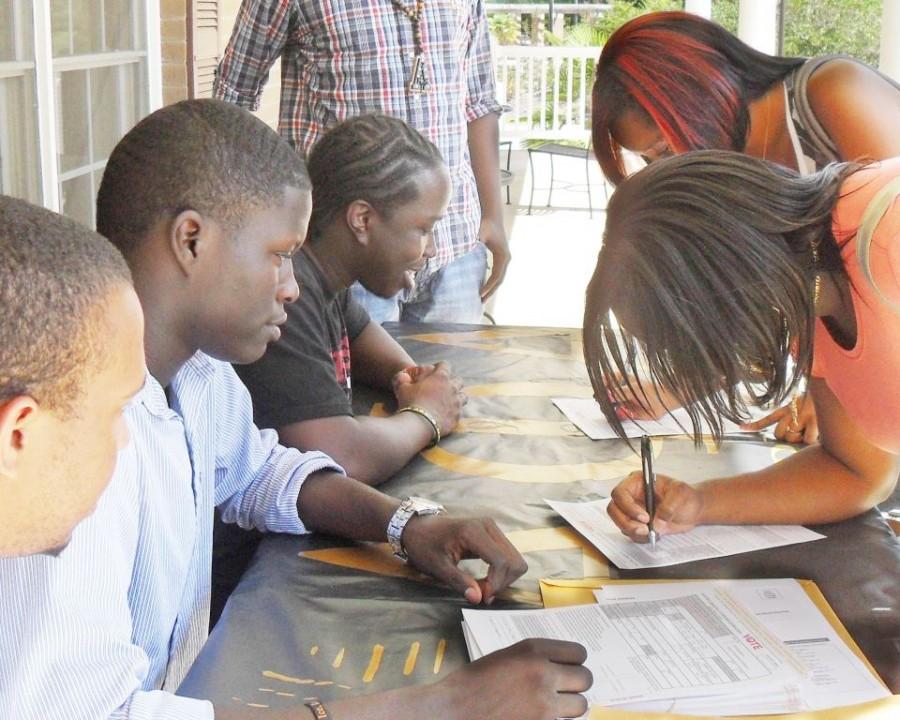 With state and national politicians doing their best to persuade voters before the midterm elections in November, Francis Marion fraternity Alpha Phi Alpha did its part last week by registering voters before the Oct. 2 deadline.

In a rush to register as many voters as possible before the cut off date, members of Alpha Phi Alpha sat outside of The Grille on campus last Tuesday encouraging anyone who walked by to register to vote. Last Friday was the last day to register and still be eligible to vote in the upcoming Nov. 2 midterm elections.

JerJuan Kenney-Page, a member of Alpha Phi Alpha and a senior majoring in political science, said the fraternity has a history of educating people on the importance of voting and registering potential voters who may not take the time to go register on their own, like students.

“It’s important for people to get out there and take action by voting instead of just complaining about the way things are run,” Kenney-Page said. “A politician can’t do anything about our problems without first being voted into office by us.”

This idea of reminding voters how important it is for them to participate has been the message of politicians on both sides of the aisle leading up to midterm elections. The stakes are high this year in both national and state races as Americans wait to see which party will take the majority.

Democrats in Congress have been in a last minute rush to show voters how important it is to come out and keep them in the majority so they can continue to push their legislation. President Obama is currently on a whirlwind national tour trying to drum up support from his strong base of young and first time voters that helped bring him into office two years ago. There are 19 seats up for re-election in the Senate and 99 in the House.

The Tea Party movement, which has taken conservative voters by storm with the help of celebrity personalities such as Sarah Palin and Glenn Beck, has brought a revival back to a Republican Party that was struggling after the 2008 elections. The additional media attention brought on by the Tea Party has increased expected voter turnout for the Republican Party.

In South Carolina, voters have the additional opportunity of choosing a new governor to replace current Republican governor, Mark Sanford, whose time in office received national news coverage when it was discovered that he lied about having an affair outside of his marriage. With this and numerous other seats open around the state, groups like Alpha Phi Alpha have actively been trying to get the word out to voters about how important their vote is to the outcome of elections in November.

Joshua Demalo, a junior majoring in health physics, is also a member of Alpha Phi Alpha and was on hand to help his fellow fraternity brothers register voters. Currently Demalo is taking a semester off from classes at FMU due to his commitment as a National Guard member, but he said that registering voters is a responsibility that he would not miss.

“Whether or not I’m in school right now, I want to be out here showing people how important this is,” Demalo said.

The fraternity was able to register over 25 voters throughout the day and share their motto with the people who stopped at their table.

“Our motto this year is ‘A voteless people is a hopeless people,'” said Ronald Gailliard, a member of Alpha Phi Alpha and a senior majoring in finance.

Many students who took the time to register were surprised at what a quick process it was. Others were relieved to see voter registration set up in such a convenient location. One such student was Taylor Brown, a sophomore majoring in biology.

“I’ve been putting it off, and I want to go ahead and register so I can vote in the upcoming election,” Brown said. “I want to vote to voice my opinion on how the country should be run.”

The members of Alpha Phi Alpha that manned the table said they were encouraged to see students interested in politics, and they hope that a large number of people will get out and vote in November.

“Since the founding of this nation our ancestors have worked for the freedom of speech,” Kenney-Page said. “Through the hard fought battles of suffrage for women and the civil rights movement for minorities, those ancestors won the right for everyone to have a voice through voting. Not to take advantage of that right through voting would be a slap in the face to all those who came before us and fought so hard.”