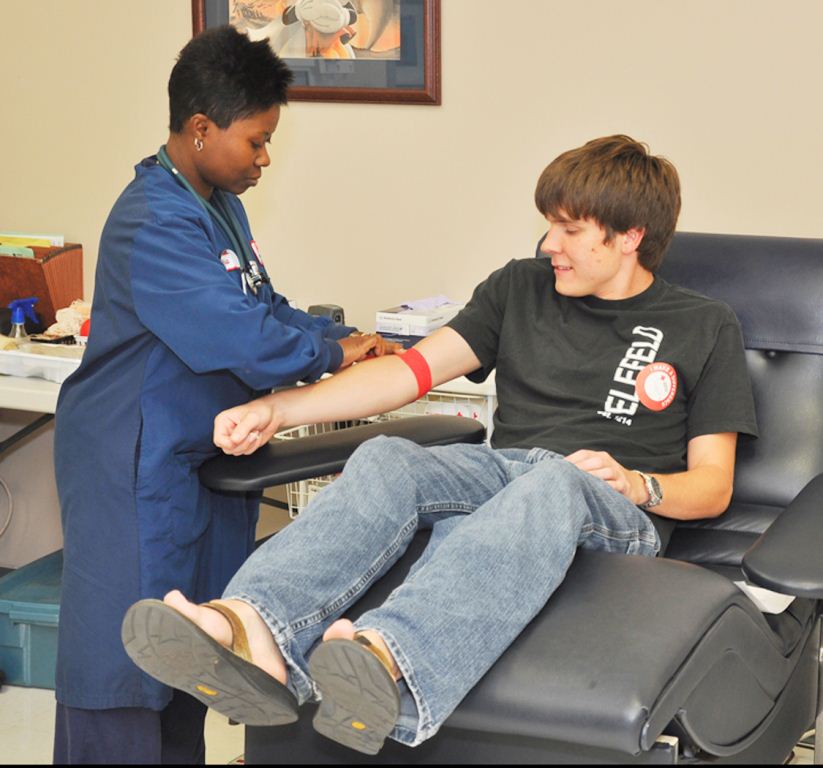 Students from two different Francis Marion University organizations did their part recently to help meet the goal of the 500 units of blood needed per day by the Red Cross to meet state goals.

According to the Red Cross, South Carolina must meet a minimum donation of 500 units per day statewide in order to keep up with the demand of the 54 hospitals it serves. Both the FMU baseball team and the Junior Reserve Officer Training Corps (JROTC) participated in blood drives on campus in a way to serve the community that supports them.

For Captain Emily Lynds, assistant professor of military science and leader over FMU’s JROTC, the decision to donate blood is a deeply personal one.

“I had a friend – a soldier – in Iraq who was hit by an IED [improvised explosive device],” Lynds said. “He lost six pints of blood, and without the donations of blood there is probably no way he would have made it. He had to be taken by medivac out to Germany.”

According to Lynds, her friend’s experience is the reason she tries to explain to her cadets the importance of donating blood.

“It hits pretty close to home when it’s someone you know,” Lynds said.

The JROTC hosted their blood drive on Wednesday, and the event was open to anyone on campus. The FMU baseball team’s blood drive was limited to the players, who had a goal of donating 40 units of blood.

Head FMU baseball coach Art Inabinet said that the baseball program conducts a blood drive every year in which the team members donate blood for the Red Cross.

“This is a community service project,” Inabinet said. “It’s a chance for our team to give back to the community. Over the past 10 years the FMU baseball program has donated over 330 units of blood.”

Mike Skipper, blood services director for the Red Cross, said that the donation of blood is a vital way that people can help save lives in their communities.

“Donating blood is the right thing to do because you are saving lives,” Skipper said. “Each time you donate you save three lives.”

The Red Cross requires donators to be at least 17 years old and to weigh at least 100 pounds before being allowed to donate blood. Any people or organizations interested in hosting a blood drive can contact the Red Cross at www.redcrossblood.org.