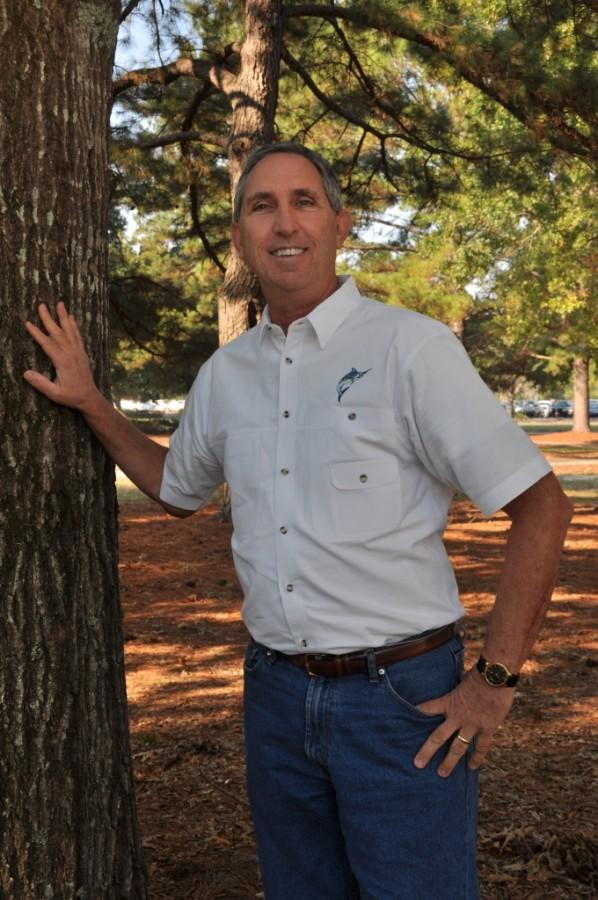 Inspiration for the book came from the professor’s interest in science and religion.

“I guess I’m like most people; I strive to gain a better understanding of reality and the truth,” David said. “And the quest for that is what motivated me more than a year ago to delve extensively into the research for this book.”

David’s search for truth and reality started by intensively researching the social sciences and natural sciences and connecting them with biblical incidents.

“I have spent over a year doing the research from all the sciences, all the ‘ologies’ -paleontology, anthropology – and correlated that with the ancient civilizations-the Mayas, Aztecs, Incas – with regard to what’s going on in the Bible,” David said.

Although David’s discipline is business, he used his interest in science to examine the missing link.

“I’m a scientist, so I’ve studied the journal articles written by Ph.D.s in astronomy, archaeology and geology and concluded that there’s a valid, strong scientific basis for most events that happened in the Bible,” David said. “And the missing link, I’m pretty sure, between science and religion is UFOs.”

In the book, David provides many examples of biblical occurrences and scientific and factual bases from a wide array of sources to provide concrete evidence that biblical incidents took place with a UFO present.

“I think there’s a good chance God was on site in a UFO with the Walls of Jericho, Sodom and Gomorrah, the Resurrection, the Transfiguration, the Annunciation, the Baptism, the Parting of the Red Sea and the Flood.” David said. “So I’ve studied scientific and archaeological aspects of topics of events described in the Bible.”

The book also explores the notion that while blind faith alone is all that most Christians need as proof of biblical incidents, scientific evidence may strengthen one’s faith, as it did for David.

“I used to think, for example, that the Tower of Babel, the Parting of the Red Sea, the miracles, the Flood and Adam and Eve type stories in the Bible you just take for blind faith,” David said. “I’m now convinced more than ever that those things actually occurred.”

David also acknowledges the UFO subject is taboo for some Christians but the phenomena is changing rapidly. He said that the Vatican has publicly acknowledged that extraterrestrial life probably exists in the universe.

“Some folks think just talking about this topic is sacrilegious or demonic,” David said. “I am pleased that attitude is changing; I was delighted last month to be invited (by Dr. Rufus Hackney) to speak at Central United Methodist Church in Florence on this new book. The talk went really well.”

“The Roman Catholic church and the Vatican is on board with the idea of alien life, extraterrestrials, UFOs,” David said. “So they publicly acknowledge that such beings likely exist.”

While the book focuses on the link between science and Christianity, it does not limit itself to Christianity. The book explores other religions and ancient cultures as well. David grew up in a Methodist church but believes there is a strong UFO connection with many religions.

“The content of the book really applies to most religions, if not all,” David said. “The presence of UFOs has been widely acknowledged by most ancient civilizations, not just folks living in the biblical era.”

He provides scientific evidence of UFOs in ancient cultures as well.

“The Mayans said they got their information from the sky gods as did the American Indians, the Aztecs, Incas, Egyptians, Sumerians,” David said. “I’ve gone back and studied, and I see a real close interaction among those civilizations with sky gods, UFOs. When you look at the evidence across the planet over time and distance from folks who didn’t know each other, you start to put the pieces of the puzzle together, and it becomes clearer and clearer that these entities are real.”

The book also provides insight into areas such as the 12-21-12 Mayan theory about the end of the world.

“In this new book, I get into the Mayan last day, the 12-21-12, and there’s going to be things that our astronomers, just of late, have discovered that are going happen on that day,” David said. “For example, the earth’s axis is going to wobble that day at 7:12 a.m. Eastern Standard Time, and our sun will align with the galactic center of the universe on that day.”

David does not intend to push his beliefs on anyone; rather he desires a better understanding of reality and the truth. In the book, he provides research and leaves it up to readers to decide for themselves about the missing link between science and religion, and whether the UFO-Christianity Connection is fact or fiction.

“I keep open in the book the notion of whether the UFO-Christianity connection is fact or fiction and let the reader decide for himself,” David said. “I provide extensive research and documentation: Youtube (videos), journal articles, citations. So, for any point in the book, the reader can easily google that term or google that concept and check it out for themselves and see what they think.”

David hopes that readers will use the book to explore their own personal beliefs about the link between science and religion and will use the newly gained information to deepen their faith and knowledge.

“Romans 12:2 and other verses in the Bible say it’s OK to think outside the box,” David said. “And I think God expects us to think and to strive to become all we can become in terms of our knowledge. For every reader, I hope this new book will renew their mind, expand their knowledge and strengthen their faith.”

For more information on Dr. David’s new book or to purchase a copy, visit www.ufochristianityconnection.com. Professor David plans to speak at other churches, civic clubs and organizations on the science-religion missing link, UFOs, and the connection with Christianity.