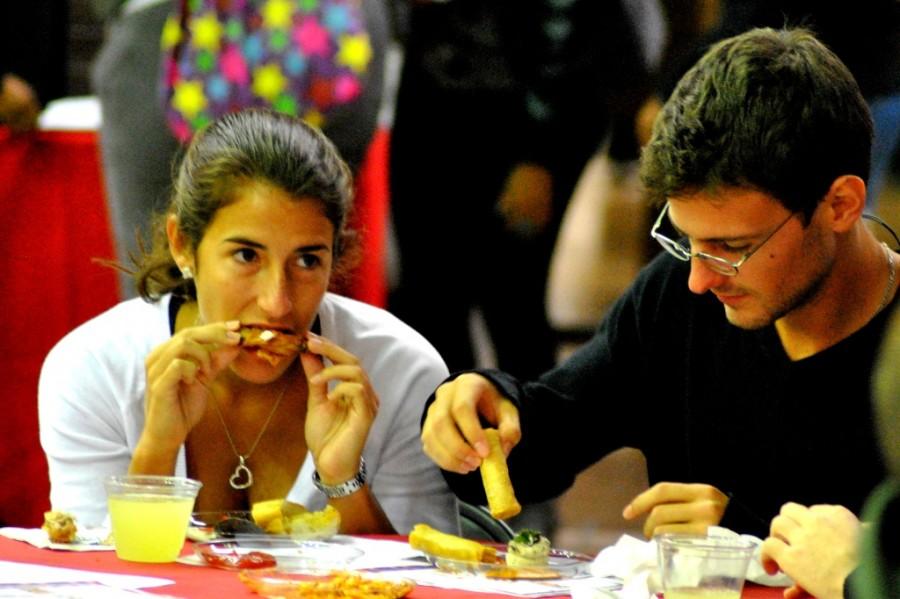 The Cultural Food Festival at Francis Marion attracted numerous students and faculty members to the University Center (UC) on Wednesday, Oct. 20. Exploring cultures and relishing cuisine from around the world was the order of the day.

The special event was collaboratively organized by the University Programming Board (UPB), the Student Government Association (SGA) and the Office of Multicultural Affairs.

Assistant Dean of Students (Multicultural Affairs) R. Daphne Carter expressed that the outcome was satisfying, and that the event was an overall success.

“We decided that we should work together and do something for the students to that they can experience a world culture,” Carter said. “This was the first time that we organized an event in such a grand scale; I was excited to see how many students showed up.”

The central idea of the event depended on the involvement of the student body, in a sense that they were encouraged to try new cuisine from other cultures. France, Italy, Asia and Germany were some of the countries represented.

“I noticed how most of the students were hesitant to try the French food that was on display,” Carter said. “They were all moving toward the American food because they’re used to it. See, that’s the kind of thing that I want them to remove from their mind and encourage them to actually explore something new. I want students to learn more.”

Students are usually accustomed to a traditional and familiar view of their how they perceive their world. Stepping outside the comfort zone is not easy, but it ultimately provides a diverse and wholesome experience. Cater emphasized the fact that students should have an open mind and possess the willingness to embrace new customs and cultures.

“I wanted this event to bring a sense of unity,” Carter said. “It also helps the student gain a richer experience of the university.”

The success of the cultural festival rested on the participation of students, faculty and the others present on campus.

“I was happy by the outcome because it shows that students are interested,” Brand said. “For the first time, the turnout has been great, and we saw that students were enjoying themselves.”

Some of the dishes included assorted canapés, Italian bread and other familiar favorites such as soft pretzels.

The commons area in the UC was packed with students, a few faculty members and a few members from the army ROTC.

The cuisine was arranged and prepared with help from the Ervin dining staff.

“Basically, we went up to the dining staff and asked them if they could prepare the dishes from the representing countries that we had in mind,” Carter said. “They looked at the menu, looked at the recipe and made it happen.”

Treating cultures outside one’s own with the same respect is unifying and allows people to learn and understand life through a new standpoint – a global standpoint. The efforts of the student affairs department are constantly helping students gain knowledge and exposure to international acceptance.

“We will continue to organize this event from now on,” Carter said. “Our mission is to do whatever it takes to expose students to a wider, diverse and cultural understanding so they will have a well-rounded experience at the university.”