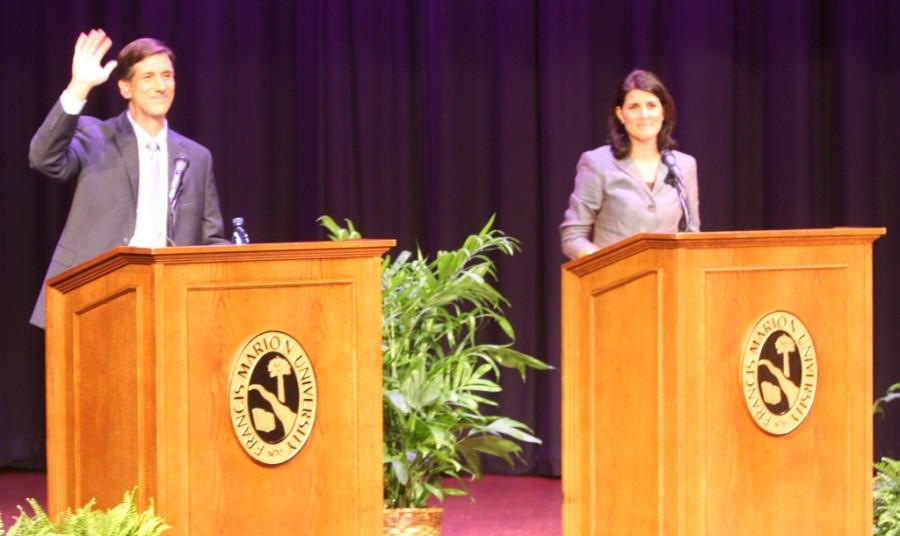 “Heated” and “lively” were the words on everyone’s lips as they left Chapman Auditorium at Francis Marion last week after the last gubernatorial debate held before the Nov. 2 elections.

Audience members ranged from students to Florence natives to local politicians and business men and women. One such person was Spencer Scott, chairman of the Florence Democratic Party.

“I thought the debate to be very spirited and honest,” Scott said. “It went well for both candidates.”

Francis Marion, in conjunction with Coastal Carolina University, Florence Morning News, WBTW and scnow.com hosted the last of only three debates agreed to by the candidates after a campaign season filled with negativity on both sides.

Francis Marion trustee W.C. Stanton was on hand to watch the candidates debate one another.

“It was very interesting,” Stanton said. “Both candidates were well prepared and made good points. The panel provided constructive questions.”

Although polls showed support for both candidates running in the 40 percent range in what is primarily considered a Republican state, the remaining 15 to 20 percent of undecided voters were the target audience Tuesday night.

Both candidates spent a good deal of the evening trying to convince voters that their opponent was the wrong choice for South Carolina’s next governor. Many South Carolinians were surprised to see the two candidates spar as much as they did during the debates, thinking they might have taken down their negative approaches a notch or two with elections only a week away.

However, similar political races across the country have been captivating Americans as they have watched Republicans and Democrats go for the jugular in a midyear election season fraught with tensions over things like the economy, jobs, healthcare and the war in Afghanistan.

During the debate, both candidates drew reactions from the audience as they made tough statements against one another.

Sheheen drew audible gasps and clapping from some members of the crowd with his reply to Haley’s claims that he should not be allowed to be governor after his career as a trial lawyer.

“I’d rather have a successful lawyer as my next governor than an accountant who didn’t pay her taxes,” Sheheen said.

Haley returned the favor at the end of the debate when the moderator, WBTW anchor Bob Juback, asked the two candidates if they still liked one another after the tense campaign.

“I used to,” Haley replied, smiling.

Two students found in heated but friendly conversation after the debate discussed their differing takes on how the candidates performed. Brandy Montgomery, a junior majoring in history, found that she was drawn more to Haley than Sheheen.

“I feel like Sheheen attacked Nikki Haley more than telling his policies,” Montgomery said. “I knew nothing about him before the debate and I still feel like I know nothing.”

Montgomery’s friend Nia McCray, a senior majoring in political science, had a different impression on the debate.

“I thought it was interesting, and Sheheen is a great politician,” McCray said. “The only policy point Haley touched on was privatization. She would cut back on jobs for small businesses and money for higher education.”

After the debate, audience members were invited to a reception held at FMU president Fred Carter’s house on campus. Republicans and Democrats alike gathered to enjoy refreshments and conversation, discussing the outcome of the debate.

Francis Marion professor of English Ronald Miller summed up the experience of sitting through the debate.

“I thought it was both entertaining and educational,” Miller said. “And, it was a great honor for FMU to host the debate.”