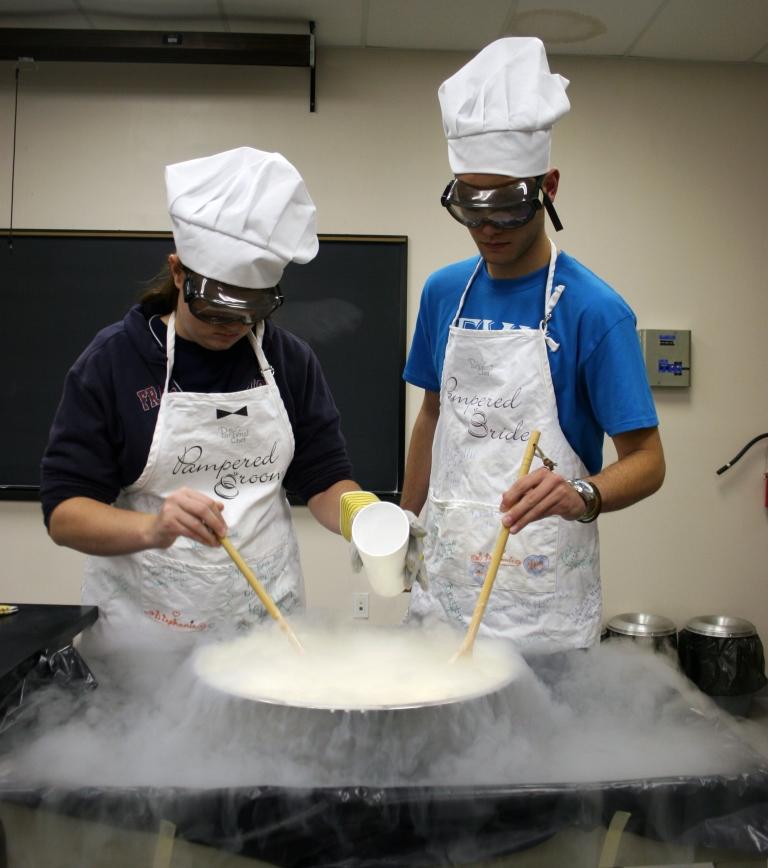 SCPSI is geared towards introducing high school students to physics in general and Francis Marion’s physics program in particular.

Chair of the Department of Physics and Astronomy and Professor of Physics Dr. David Peterson explained that one of the main purposes of SCPSI is to “share the excitement of physics.”

The institute gives high school students a chance to become familiar with more advanced ideas and equipment than they would normally be exposed to in a high school setting.

“The other part of the program is to show them the opportunities that are available for them at Francis Marion University in our physics and engineering programs,” Peterson said. “In particular, health physics, computational physics, the dual engineering program, and our astronomy collateral.”

“In addition to the South Carolina schools, we’re also reaching out to the schools on the border with North Carolina,” Peterson said. “This year we had students from the Fayetteville area and from the Wilmington area.”

The students are selected through a competitive application process. Invitations are sent to all of the high school teachers in South Carolina, who are encouraged to nominate students for participation in the institute. An online application is also available.

A group of junior and senior physics majors chosen through a careful selection process served as FMU Student Leaders during the institute. These FMU students led the high school students through different experiments during their time here.

The high school students selected six of these 14 experiments to take part in, usually in groups of two or three at a time.

“It’s one of my favorite experiments from Modern Physics (Physics 314),” Conner said.

“I like how it relates to me on a personal level, being a part time musician, and I love the mathematical interpretation, being a full time mathematician/physicist,” Stone said. “There’s really nothing to not like about it.”

“The best part the experiment is that you learn about something you don’t usually think of,” Patel said. “With a simple microphone you can record the sounds you hear. You really get to see the chaos of compressing air waves your brain decodes when you’re hearing something. It’s amazing.”

A Liquid Nitrogen Ice Cream Party was also held as part of the three-day series of events. At the party, liquid nitrogen was used instead of salt and ice to cool the ingredients for ice cream.

Professor of Physics Dr. Seth Smith explained the purpose of the party.

“The Liquid Nitrogen Ice Cream Party & Demonstration Program comes at the end of the most academically demanding day of SCPSI,” Smith said. “During this one day (Friday), the high school students participate in four experiments and attend two physics presentations. Hence, one of our goals is to celebrate the completion of this day and reward the efforts of the students. Towards that end, we hold a Faculty Demonstration Program that is followed by the Liquid Nitrogen Ice Cream Party & Demonstration Program. These are designed to be fun events that allow us to celebrate physics with our students. Each event has plenty of physics in it, but the emphasis is more on enjoying the science rather than studying it.”

The Liquid Nitrogen Ice Cream Party is usually a favorite for the high school students and the physics majors alike.

“The feedback that I have personally received from students about the Liquid Nitrogen Ice Cream Party & Demonstration Program has been overwhelmingly positive,” Smith said. “Many SCPSI participants refer to it as their favorite part of the institute. While FMU students make the ice cream, I show the students a number of liquid nitrogen demonstrations (and tell a few bad jokes). Afterwards, we provide the students with their own materials and allow them to perform their own liquid nitrogen experiments under the supervision of FMU physics faculty and upper level physics majors. When the ice cream is ready, our finale is to enjoy this sensational treat with a multitude of tasty toppings. Many students have told me that this is the best ice cream that they have ever eaten.”

Patel said that he loved going to Liquid Nitrogen Ice Cream Party because it combined two of his favorite things: ice cream and liquid nitrogen.

“I went to the Liquid Nitrogen Ice Cream Party,” Patel said. “This was my second time in a month. I love ice cream. And I love playing with liquid nitrogen. It was a blast.”

During the party, they also examined how liquid nitrogen affects different properties, such as the elasticity of a rubber ball. Students got to freeze and shatter roses, and Dr. Smith hammered in a nail with a frozen banana.

“My favorite part of the Liquid Nitrogen Ice Cream Party & Demonstration Program is seeing the smiling faces of the students as they do their own experiments and enjoy celebrating their fascination with physics,” Smith said. “They seem to be having the time of their lives.”

Smith also expressed his pleasure with the institute as a whole.

“I have two favorite parts of SCPSI as a whole (other than enjoying the Faculty Demonstrations and the Liquid Nitrogen Program),” Smith said. “Firstly, I derive great pleasure in getting to know the talented high school students from SC and NC and answering the many questions that they have about physics. Their obvious passion for physics is contagious. And secondly, I am always impressed by the professionalism and dedication of the FMU student leaders for SCPSI. They have the largest responsibility for the operation of SCPSI, and they always do a job that makes me very proud to be one of their professors.”

Peterson said that he thought SCPSI was successful this year.

“One of the assessments is, ‘Does everyone have a good time?’,” Peterson said. “The answer is yes, everyone did have a good time. It was an enjoyable experience. Some of the excitement for physics from faculty, seniors and juniors transmitted to the students, and some of the excitement for physics from the high school students was transmitted to us. Many of them expressed an interest in attending Francis Marion University. I believe, in many ways, it was successful.”

Conner agreed that the institute was successful, and he said that he was pleased to be a part of both SCPSI and FMU’s physics program.

“I hope we showed them what a great physics program we have at Francis Marion,” Conner said. “And physics is fun.”