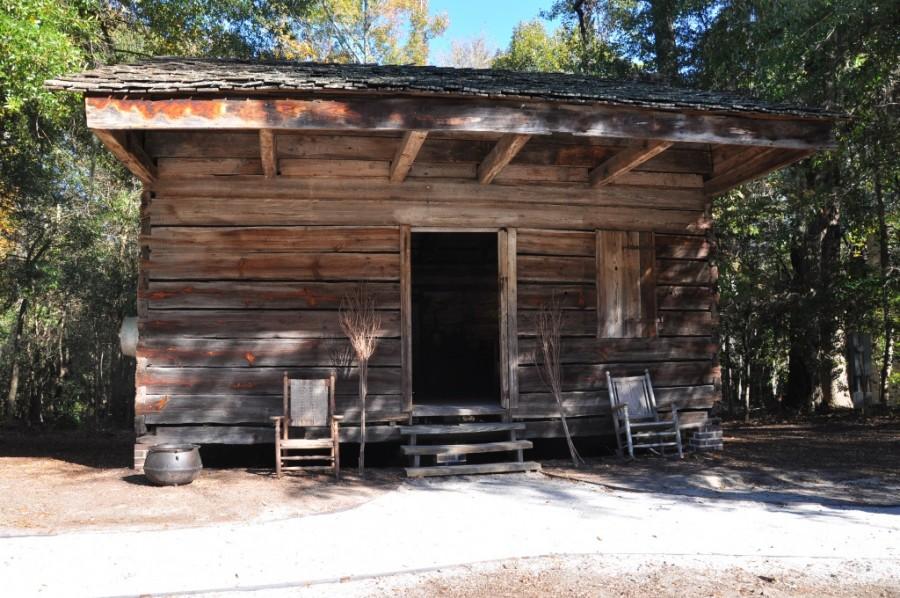 The small shack-like cabins on the outskirts of Francis Marion’s campus hold more history than one might expect at first glance.

These cabins were built in 1836 during the time when farmers and the wealthy bought and enslaved African-American men, women and children.

J. Eli Gregg was the owner of the farm on which Francis Marion now sits. He allowed the slaves to build their own cabins and have the basic necessities, knowing that the slaves who worked his cotton fields needed food, water, clothing and shelter. He knew that if any of them got sick or injured, they could not work the fields, and he would make no money.

The skills and techniques used in making the cabin walls allowed them to be built without any nails. Each of the wooden planks was made like a puzzle with dovetailed corners holding the walls together.

To make the dovetails, the slaves would make a piece to fit another perfectly at the corners. Each piece was marked with tick marks that were scratched into it for easier placement and are still visible today.

The slaves were also skilled blacksmiths and created the hinges and other metal works. Most of the time these metal works were strictly functional, but at times they would use their skills to make more delicate and ornate decorations.

They also made their own shingles, using a wedge and mallet to hew shingles from blocks of wood.

Even though there were no nails used in the walls, there are now nails in the structures that were put there to hold them together while they were moved from their original location.

There were originally eight cabins, but most were sold, disassembled or simply torn down, except two – Ms. Catherine’s cabin and Ms. Tena’s cabin. The cabins are named after these two ladies because they lived in the respective cabins.

Originally, all eight of the cabins were located in a cotton field along a road that would now run through the gym and to the Stokes Administrative building.

After emancipation, the slaves stayed on the farm because they had nowhere else to go, they knew the work and they knew the people. The last tenants of the cabins left around 1953.

The two cabins now permanently located on Wallace Woods Road (right inside gate 6) are the only ones surviving of the original eight. One of the two, the one known as Ms. Catherine’s cabin, was actually supposed to be donated by Francis Marion to the Smithsonian Museum in Washington, D.C. However, Hurricane Hugo rampaged through the area in 1989 and destroyed the roof by dropping pine trees on it. The roof was later repaired, but due to these repairs the Smithsonian deemed the cabin no longer original or historically accurate, and rejected the cabin.

Here on this campus, the cabins now sit as historical landmarks and a place where the African-American history and heritage can be preserved.

“The cabins are a continuing reminder of the wisdom, dignity and integrity of the African American cultural heritage,” McAlister said.

Although the Nov. 9 showing was the last of the semester, the showings will resume in March. For more information, visit the FMU website and follow the quick link to the cabins, or for dates and times check the FMU calendar.