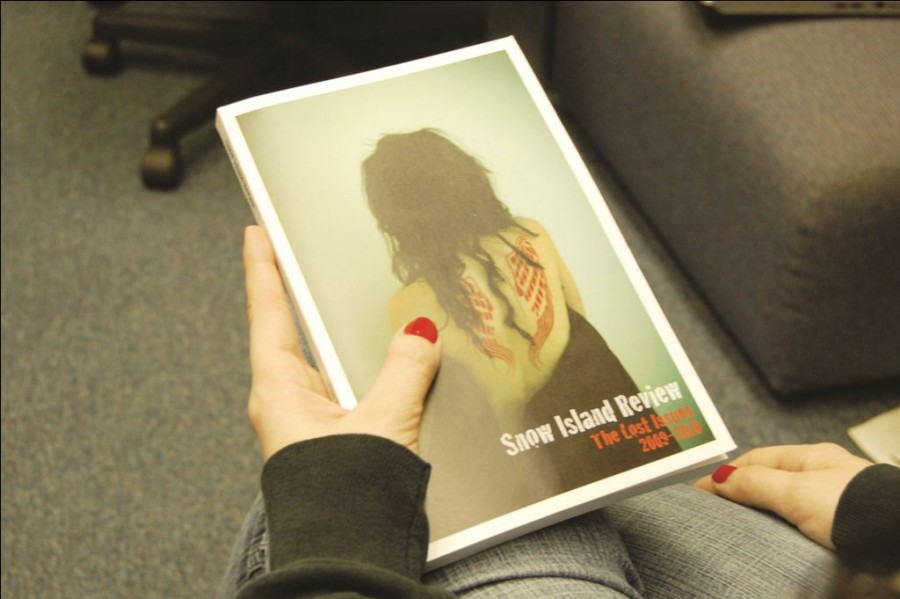 These issues, called “The Lost Issues,” are currently available and have been distributed around Founders Hall.

The previous faculty advisor to SIR, Associate Professor of English Dr. Jo Angela Edwins, offered some background about this issue.

“‘Lost’ is a bit of a metaphor, as they weren’t exactly lost, only unformatted for publication,” Edwins said. “A combination of department budget constraints and some editorial missteps caused the issues to get backlogged, and the problems tended to snowball as a consequence.”

“We were at last able to get an excellent art and layout editor in Michaela Moore, who was able to fix some of the problems in consultation with faculty such as Professor Charles Jeffcoat in Art, and the English Department was able to fund the publication of the larger issue, which actually saved money because we weren’t dealing with four covers for each semester, so the end result was the impressive issue we now have,” Edwins went on to explain.

Now that these issues have been published, students who had work accepted in the past can see it on the printed page.

“I am indeed relieved that the issues have made it to print, primarily because we have several students, many of whom have graduated in the meantime, whose work has finally made it to print,” Edwins said. “SIR showcases the vibrant creativity of FMU students, and that creativity needs to be highlighted both to give our students the experience of publication and to inspire other students to put their own creative work out there for audience members to appreciate.”

Although Edwins served as faculty advisor for the past several years, she recently passed the torch to Professor of English Dr. Jon Tuttle last fall.  She remains involved with the journal.

“I have been consulting with Dr. Tuttle about SIR since he took over in the fall, giving him history about submissions and selections processes and staffing, coordinating readings, consulting with printers, etc.,” Edwins said.

Together, Edwins, Tuttle, and the editorial staff of SIR have been discussing possible upcoming changes to improve SIR.

“I’ve attended some brainstorming sessions with him and the editorial staff to discuss possible changes to SIR,” Edwins said. “One of the biggest changes we’ve discussed, which is something I hope will take place, is moving the publication of SIR to an annual rather than a semi-annual event. Although submissions, selections, and readings will still take place each semester, the final product will appear once a year, which will save money in tight budgetary times but, more importantly, will allow for more time to design an attractive, professional product.”

Making SIR an annual publication will allow the journal to be bound in book form, like “The Lost Issues.”  Submissions will still be accepted during both the spring and fall semesters, and semi-annual public readings of accepted works will still take place.

Edwins shared her enthusiasm about the SIR readings.

“It’s exciting to see young writers share their work in front of an audience, sometimes for the first time,” Edwins said. “Ideally, that experience will inspire them to go back and write new work as well as connect with other artists in their college community.”

Work on the journal’s website is also in progress.  The website will hopefully provide a new outlet for students to their own and others’ work.

“Dr. Jennifer Kunka’s Digital Media class also designed an excellent website for SIR last spring, one that I hope will be up and running sometime this semester, which will allow current, past, and prospective FMU students to see the exciting work of SIR,” Edwins said. “Selections from past issues will hopefully be posted there, as well as contact information for staff members. It should be a strong addition to SIR.”

The next issue, containing submissions from the fall semester of 2010, should be published in the upcoming weeks.

Dates for upcoming SIR events this semester, including an interest meeting for anyone who wants to become a staff member, will be posted on flyers around campus.