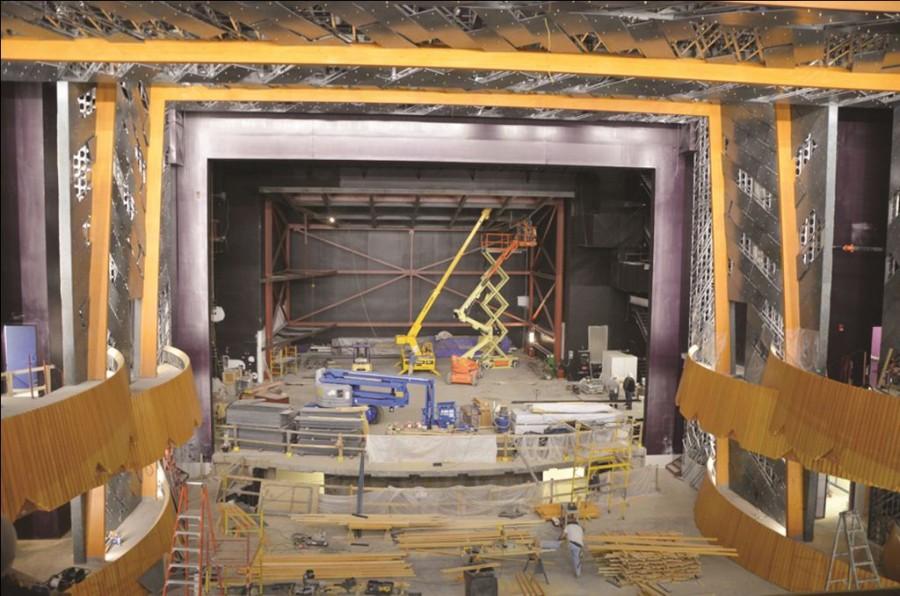 The Francis Marion University Performing Arts Center is nearing completion, according to Director Laura Sims, who began working with the project in 2007.

The initial date for completion, set when she began, was for 2009. Planning and construction documents, however, took longer than expected and have delayed the project. Weather has also played a significant role in the delay.

Sims said that professionals involved with other centers told her early on to expect delays.

“That’s just the nature of what usually happens,” Sims said.

Any changes to the center require revised architectural sketches, and price approval – and even the smallest details require special consideration. For example, the duct-work alone has a significant impact on acoustics in the main venue – even the carpeting has a significant effect on the sound. Complicating matters further, the architects attached to the project are based in New York and are only on site every three to four weeks.

According to Sims, however, progress has been rapid over the past few months, and the projected date for the completion of construction is now tentatively set in the late spring of this year, with no fixed date yet in sight.

“The date is a moving target,” Sims said.

Most of the interior is finished now, with equipment being most of what is left for the construction phase of the project. Seats and acoustic drapes are yet to be put into place, and the orchestra shell and audio equipment still need to be installed and tested. More general equipment, such as office computers, furniture and other necessities for daily operation will be brought in when construction is complete and Sims takes over the center.

Once construction is complete and the final touches are finished, a gala will be held to commemorate the center’s opening. Tentatively scheduled originally for this spring, the date has been pushed to fall 2011 so that students and faculty can attend, since construction might be completed after the end of the current spring semester.

Sims did mention, however, that another similar event is planned for the spring. She is trying to plan a “hard hat” concert just before construction completion. This concert would be held in order to test audio equipment and the orchestra shell while it was still possible to make adjustments; this would allow the construction workers, architects, etc. involved in the project to see the end result of their labor.

Sims gave a preview of the sort of programs to be offered at the Performing Arts Center when it opens in the fall. She hopes to hold five different series for the main venue: concerts; dancing; Broadway and off-Broadway; touring shows; and family series programming, which will include matinee shows for schools and evening shows for the whole family.

Lawrence Anderson, chair of the Department of Fine Arts and professor of graphic design, printmaking and drawing, has been in contact with public schools regarding the Performing Arts Center, and he said that the schools have already expressed interest in an educational series. Not only have local schools expressed their interest, according to Anderson, but also schools in other districts throughout the Pee Dee. He shared his own enthusiasm on the development.

“It’s going to have a huge impact on the arts for the area,” Anderson said.

Additionally, Sims hopes to line up a variety series that could range from acrobatics to improvisational Shakespeare. Similar events are to be expected for the black box theatre, where close, intimate performances can be held, such as storytelling, poetry slams, or musical duets, trios and quartets. While year-round programming is the ultimate goal, initial focus will be placed on the months from September to May.

For the amphitheater, Sims said that she wanted to plan student and community events, and that many held soon after the center opens could be free. She expressed a belief that people will enjoy the atmospheric appeal and accessibility.

“Most of those events might have to be free events for the community,” Sims said. “It’s going to be quite nice, especially when the weather’s nice. The goal is to start smaller and build our way up.”

Many Broadway shows travel through smaller cities to perform after their first and second national tours. While the stage setting and orchestras are often smaller to accommodate the usually physically smaller venues, the shows often retain most, if not all, of the original cast. Sims hopes that the Performing Arts Center will make Florence an attractive destination for various Broadway and off-Broadway productions as they travel through the southeast.

Some people, however, according to Sims, have expressed concern over the Performing Arts Center being as successful as Sims hopes it will be.

“People always ask me if we’re competing with the FLT (Florence Little Theatre),” Sims said. “They are a production company, and we are a presenting company. We’re basically unloading things off a truck – pre-packaged play productions.”

According to Sims, the center should not present competition for the FLT, but simply provide more cultural exposure for the area. Sims also said that in the interest of providing variety, she actually plans to contact the FLT in order to ensure that the Performing Arts Center does not present too similar programs.

“We’re going to try to make sure there’s enough entertainment for everyone,” Sims said.

She also expected there to be enough parking for everyone. The new center will be able to boast parking for 170 vehicles in its parking lot, still to be constructed, and will offer a bus drop-off location on-site, as well as handicapped parking. In addition, according to Sims, nearby businesses and other entities, such as Poyner Adult Education Center, have offered the use of their parking lots.

Darryl Bridges, vice president for public and community affairs at Francis Marion University, provided details on the bus drop-off site. Not only is the center to have a pick-up and drop-off site, but it is planned to be incorporated into a new bus route.

“During the past year, we have been working with PDRTA (Pee Dee Regional Transportation Authority) to establish a transportation route between the university and downtown Florence,” Bridges said. “Not only will this meet the need for student transportation to the Performing Arts Center for academic purposes, but will provide students with access to the entire PDRTA network, allowing them to access public transportation throughout the city.”

Bridges also mentioned benefits for members of the Florence community and for off-campus students. The bus route and the benefits, run both ways.

“A bus route will provide community members transportation to campus to access the resources and programs we offer, as well as allow off-campus students to commute to class,” Bridges said.

He expected the route to be open this fall, after the PDRTA completes a survey to help determine how to accommodate the new demand on the bus service.

While construction is still incomplete, and parking and transportation accommodations are still in the planning stages, the Performing Arts Center has already hired its first staff position. Shortly after this past Thanksgiving, in 2010, the center hired Kimberly Harwell as ticketing services manager.

According to Sims, the center will offer, in addition to permanent staff positions, per-event employment for students and members of the community, with no experience required and all training provided at the center.

Anderson pointed out, moreover, that music industry students in particular, who, according to Anderson, will be the only students with classes actually held on-site, will be able to benefit from internships at the Performing Arts Center, where they can acquire hands-on business experience in the industry, making the center more than just an entertainment venue.

“It will also be a learning center for our students,” Anderson said.

He also wants to see Francis Marion University alumni involved alongside current students, taking active roles in productions and in the community through the Performing Arts Center.

“It’s going to be a great thing – for the campus, for the fine arts, and for the community,” Anderson said.