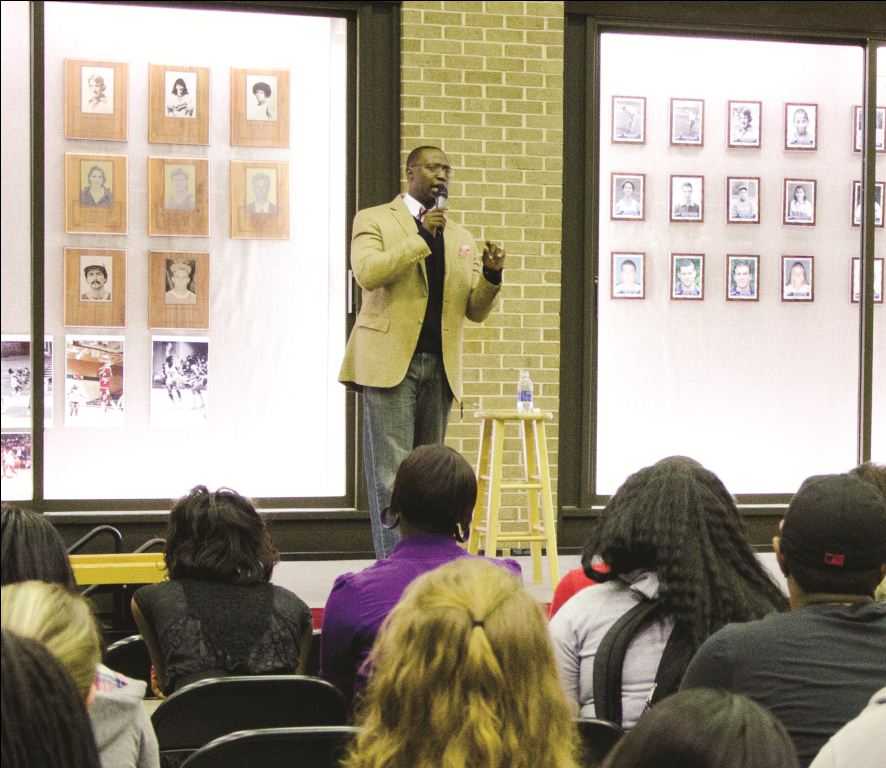 Goodwin is from “cornbread cookin’, cotton pickin’, collard green eatin'” Camden, S.C., and after serving four years in the United States Army, he graduated from Lander University in 2001. He was also a part of the Kappa Alpha Psi (KAP) fraternity, and many members of the FMU chapter showed up to support him.

“[He’s] my frat brother, and I want to support him in all of his endeavors,” Michael Moses, a member of KAP said.

Goodwin had several laugh-out-loud moments in his act. One of those was his “it ain’t wrong, but it just ain’t right” bits.

“How about two grown men riding on a motorcycle together?” Goodwin asked, leading into a joke. “It ain’t wrong, but it just ain’t right.”

Goodwin also gave the examples of a thug wearing flip-flops, a man wearing lip gloss and a man skipping as things that are not wrong but do not seem right either. He even skipped around the University Center to prove his point.

In addition to being described as the love child of Wesley Snipes and Orville Redenbacher, Goodwin said he has been told that he resembles the rapper Gucci Mane.

“Does it look like I have ice cream all over my face?” Goodwin asked, referring to the ice cream tattoo Gucci Mane has on the right side of his face.

Goodwin brought up another rapper, Flavor Flav, as proof that some people will do anything to be on television.

“Flavor Flav has to be the ugliest man on the planet, and those girls were kissing him on the mouth,” Goodwin said.

Goodwin then moved on to mention how much he hated Facebook, but not without good reason.

“I hate how people will tell all their business on Facebook, but then get back on there all upset saying how people need to stay out their business!” Goodwin said. “It don’t make no sense to me.”

He said the devil makes people do crazy stuff.

Goodwin knew that performing in front of a college crowd would be hard, and FMU students were no different than he expected. While he did get plenty of laughs, he still thought the outcome could have been better.

“I just wish I could have connected better with the audience,” Goodwin said.

“It was a tough crowd to please, but he did the best he could to keep it going,” Morris said.

Barry Heyword, a senior finance major at FMU, said he just came to have fun, and that he thought that Goodwin was pretty funny at times.

Goodwin performs at several other venues such as birthday parties, churches and many Christian religious events.