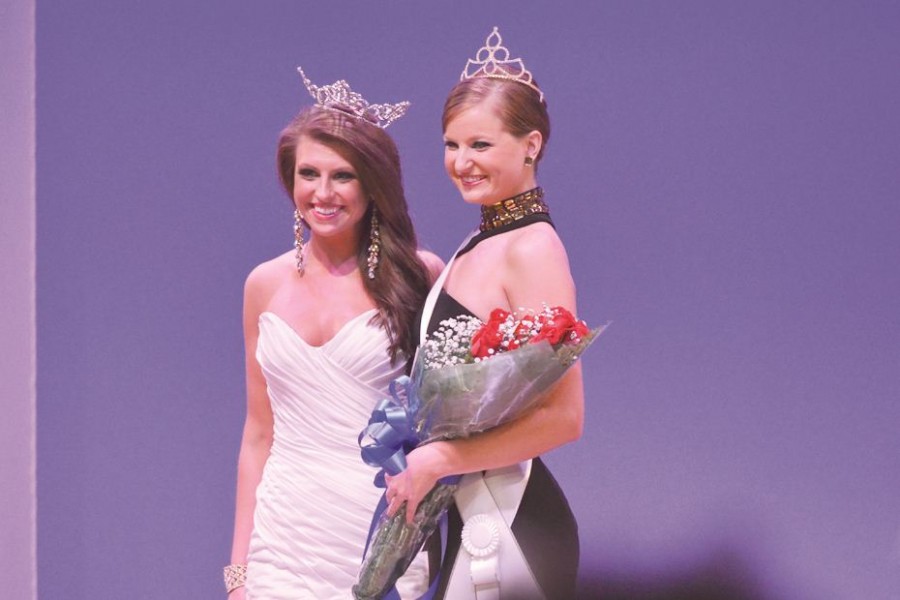 Ms. FMU 2011, Cari Ellen Hicks, was crowned on Monday, Feb. 21 in the McNair Auditorium. Hicks, a senior majoring in marketing, joins the list of students who have been named Ms. FMU since the pageant’s founding in 1971.

This year’s pageant, the theme of which was “Wish Upon a Star,” opened with a dance by the contestants to “Shining Star” by the famous R&B group Earth, Wind and Fire. The number, which featured a patriotic theme due to Francis Marion University’s homecoming week, was considered by many of the contestants to be their favorite part of the show.

After the contestants introduced themselves during the opening number, a history of Ms. FMU was given, followed by the introduction of the auditor and introduction of the hosts, Ms. FMU 2010, Bree Boyce, and senior Christopher McKagen, mass communication major.

Following the introductions and history, the casual wear competition took place. The contestants wore their own version of the little black dress and accessorized as if they were attending a social event.

After the panel of judges, which included two professors and two staff members, was introduced, Boyce provided the audience with a song.

The formal wear competition followed Boyce’s performance. During the contestants’ walks, the hosts informed the audience and the judges of the contestants’ majors, their future plans, what makes them unique, the one wish that they would like to come true and their favorite quotes.

The intermission, which followed the formal wear competition,featured an automated display of pictures of each contestant ranging from her childhood to her college years. After the intermission, the top five finalists were announced and the on stage interviews were given.

The questions, created by the judges, ranged from the true definition of beauty, to the positive or negative effects of social networking to what a contestant would tell General Francis Marion if he were here today.

Prior to crowning Ms. FMU 2011, Miss Congeniality, the second runner-up and the first runner-up were named.

“I was surprised, but I’m very happy,” Winans said.

“I wasn’t expecting this at all, especially this being my first year, but I’m very excited,” Davis said.

“I am thrilled to death to be the first runner-up for Ms. FMU,” Lee said.

“I am so excited, and I can’t wait to get involved,” Hicks said.

Hicks will serve many different functions as the title winner.

“After being selected, Ms. FMU represents Francis Marion throughout the following year at a variety of events,” Associate Dean of Students, Cheri Richardson, said. “Additionally, Ms. FMU participates in student recruiting, orientation sessions and activities with local high school students.  Ms. FMU is considered a role model for Francis Marion University and represents our campus community in a positive manner throughout all of her activities and endeavors.”

As Hicks accepted her crown, Boyce gave up hers, although with no regrets.

Boyce was actively involved with different events while serving as Ms. FMU.

“There were many events I was involved in,” Boyce said. “The one most dear to me would have to have been the Patriot Mile. My personal platform being ‘Eating Healthy and Fighting Obesity,’ I was honored to be involved and to speak to many of my fellow students about improving their health overall.”

Boyce was also actively involved in the community.

“I really promoted Francis Marion to our community, state and even nationwide,” Boyce said. “While being involved in the Miss South Carolina pageant this past summer, I was proud to speak about my university that I hold to such a high standard and really emphasized how great of a university we are and what we have to offer. Many prospective students were at orientation this past year due to the praises I sang about FMU.”

Boyce, who has competed in several other pageants, will continue in pageantry and hopes to receive the ultimate crown.

“Just recently I won the title of Miss Capital City 2011 and will be returning to Miss South Carolina on July 2nd in Columbia, SC at the Township Theatre,” Boyce said.”I competed in Miss SC last year representing as Miss Florence and made it to the top 10! I’m hoping to win the title this year and be the first student at FMU to win and continue to my ultimate goal as Miss America.”

As far as education, Boyce, who is a theatre major, plans to get her master’s degree and doctoral degree in theatre history, and perhaps return to FMU as a professor.

Hicks, who serves as an university orientation leader and as a cheerleading coach for Briggs Elementary School, admits that she has big shoes to fill, but is honored to be following in Boyce’s footsteps.

“As far as Bree goes, there is only one word to describe her which is amazing,” Hicks said. “She is so sweet and gifted and did a great job using her title to promote the university and her platform.”

“As Ms. FMU, one thing that I really hope to achieve is community and campus involvement,” Hicks said. “I plan on aiding in raising money for my platform Belle’s Butterflies, which is a group that is working to raise money for the fight against juvenile diabetes.”

Hicks, who is an avid fan of the New York Yankees, also plans on showing support to the FMU baseball team, which supported her on her winning night.

“Those darling Francis Marion baseball players were in the back row cheering me on Monday night, so I certainly will have to go make an appearance at one of their games very soon!” Hicks said.

As a senior, Hicks has future professional goals as well.

“After graduation, I plan to work in the marketing department at McLeod,” Hicks said.”I also plan to work as a part time personal trainer and group fitness instructor.”

As the new Ms. FMU, Hicks is gracious for her title, although she admits it has not sunk in yet.

“Francis Marion has been a home to me for the past four years and honored isn’t even the word to describe this,” Hicks said. “It still hasn’t completely sunk in yet, although I’m sure it will soon. I am so grateful to be the new Ms. FMU!”