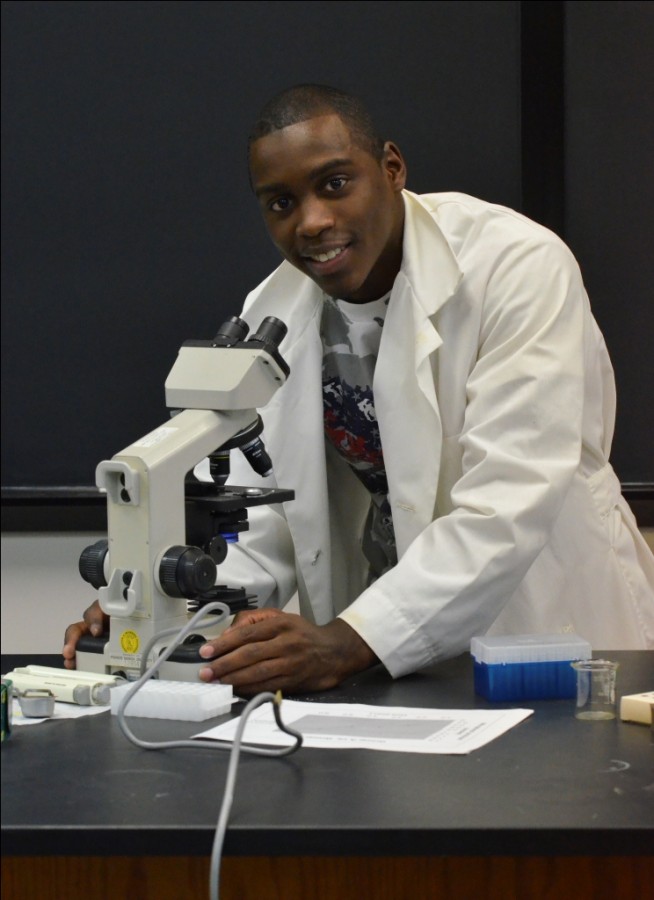 Jones will experience his own “different” opportunity, as he has been awarded a prestigious research scholarship.

The UNCF/Merck Undergraduate Science Scholarship/Internship, which is sponsored by pharmaceutical company Merck, is awarded to African-American students interested in pursuing biomedical research.

Jones has distinguished himself in winning the scholarship, which is only awarded to a maximum of 15 students nationwide, and typically to students attending larger, Ivy League schools.

“I see me receiving this award as putting Francis Marion on the map, because the students in previous years (who) have received the award are coming from Harvard, Duke, Princeton, Xavier,” Jones said.

Jones’ internship will take place over two summers, each lasting from 10 to 12 weeks. This summer, Jones will meet his colleagues, learn research and lab protocol and assist a Merck scientist in his/her research.

“The first year is a more of a classroom setting where I’ll be in a class with other recipients who received the award as well,” Jones said. “We’ll go over research techniques and proper research and lab procedures. Then the other half is actually working with a Merck scientist and performing projects that they’re doing.”

During the next summer, Jones will conduct his own research.

Based on their applications, recipients are given a choice of the area they would like to study.

“I chose cell and virology,” Jones said. “Depending on my research interest, I’ll be placed in [one of] three locations:  New Jersey, Boston or Philadelphia.”

Jones has various interests in the biology field.

“I have a very big interest in cells, genetics and molecular biology,” Jones said.  “I think it’s kind of cool how you can compare genes between different organisms. I think it’s very interesting how you can study the different organelles of the cells, and actually figure out what their functions are, which allows us to function through our everyday processes.”

Jones’ interest in biology seems to be, ironically, in his genes.

“My whole family is in the biology field:  my mom, my aunts, my uncles,” Jones said. “Some of them work for a pharmaceutical company:  my uncle is a forensic scientist.”

Jones’ mother influenced his decision to enter the field.

“I remember when I was growing up, my mom used to have this kit of the anatomy of the human body, and I just wanted to go outside,” Jones said.  “But she said, ‘You’ve got to sit down and learn this.”’

According to Jones, Merck, who also extends the opportunity to graduate and post doctoral students, gives undergraduates up to $25,000 to cover tuition, as well as a $5,000 stipend for supporting their research. The science department at the student’s institution also receives a $10,000 grant.

Jones says the money is the least important part of the opportunity.

“They want to choose students who do not just want to do the internship just for a one time experience, but actually who want to do it for a long time goal or to make it a career,” Jones said.  “If it was up to me, I wouldn’t accept the money; I would just go for the experience because I think the experience (is) more (valuable) than anything else.”

Despite the prestige of his scholarship, Jones remains humble and gives all the credit to his biology professors.

“Without their knowledge, I wouldn’t have been able to earn this opportunity because they are the people who taught it to me; I just regurgitated it back to them,” Jones said.  “I have to have some type of basis, and they are the basis for my education.”

Biology professors credit Jones’ work ethic with allowing him to receive such an honor.

“Wendell is a talented and highly motivated student, and I’m truly appreciative of the opportunity to work with him,” Dr. Latha Malaiyandi, assistant professor of biology, said.  “This award is largely credited to his hard work and accomplishments.”

Another biology professor agreed with Malaiyandi and attributed Jones’ success to his motivation.

“We’re really proud of the scholarship that Wendell’s being awarded,” Dr. Peter King, chair of the Biology Department, said. “It’s Wendell’s ability and his motivation to go and do some extra things that has allowed him to receive that award.”

Jones said that he hopes that his experience will open doors for other minority students as well.

“It’s a minority scholarship, so it gives others a chance to have the same experience,” Jones said.

“Given its prestige and competition, the Merck/UNCF research scholarship is an unprecedented experience for one of our most deserving students, and I hope that it may be an opportunity for more in the future,” Malaiyandi said.

Jones’ experience is expected to open up many doors for his future.

“I think this will be an opportunity for him to get some experience in the lab, hopefully get him into a really good graduate school, and hopefully it’ll encourage him to continue his career path in science,” Department of Biology Research Technician Taylor Poston said.

Jones, who plans to pursue doctoral studies in the field, hopes to enter into a master’s program following his undergraduate degree to continue to pursue his interests.

“After my undergraduate degree, I plan to go to graduate school where I, hopefully, will get a master’s degree in a field of biology called comparative genomics, where they compare genes between different organisms and study conserved genes,” Jones said. “After graduate school, I plan to go into post doc, into probably something more medically related.”