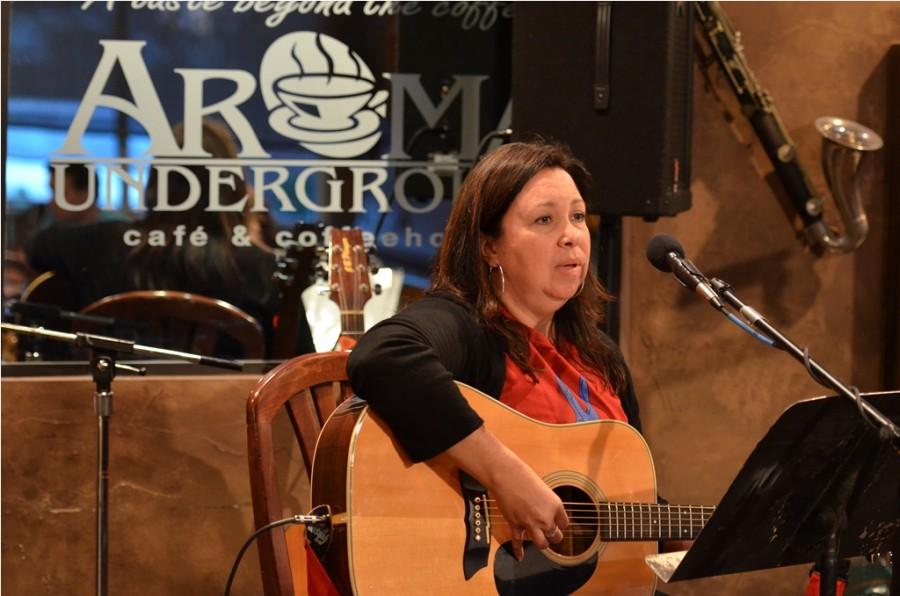 Events for this year’s celebration of V-Day are in mid-swing this week as students and faculty join efforts to raise awareness of and bring an end to violence against women and girls.

Every year, Francis Marion University holds V-Day events in a week-long celebration called V-Week.  This year, V-Week spans from Monday, March 28 to Saturday, April 2.  All proceeds from the events will go to the Pee Dee Coalition Against Domestic Violence and Sexual Assault.

This is the fourth year that FMU has put on Eve Ensler’s “The Vagina Monologues,” which is the most-anticipated of the events.  The performance will take place on Friday, April 1 in Chapman Auditorium at 7:30 p.m.  “The Vagina Monologues” began what grew into the international V-Day movement.  Tickets are $8 with a student ID and $10 for everyone else.  Money from ticket sales will go to the Pee Dee Coalition.

Associate Professor of Theatre Dr. Dawn Larsen said that the purpose of the monologues is “to raise awareness about domestic violence and eventually stop it.”  She discussed her personal favorite monologue.

“I’ve been directing and performing in ‘The Vagina Monologues’ for eight years,” Larsen said. “The one that always makes me cry (and I have already cried twice this year) is I Was There in the Room.  I know men love their children, but only a woman can be a mother.”

Larsen explained that she hopes viewing the performance helps those in bad relationships address the problem.

“First, if they are in a bad relationship, I hope they understand that they need to get out,” Larsen said. “I’m a survivor of domestic abuse and when you’re in it sometimes you don’t know it.  Second, if they know someone in a bad relationship, they can help them get out.  Third, men that have seen the show tell me that they learned a lot about women that they never even imagined before. Finally, domestic abuse is a closeted problem.  We’re not supposed to ‘air our dirty laundry,’ which keeps it in the closet.  Everyone probably knows someone in an abusive situation.”

She cited some statistics from the Pee Dee Coalition’s website:  one in every four women will experience domestic violence at some point in her life, South Carolina is number nine in the rate of women murdered by men according to a September 2010 report, and nearly one-third of reported female homicide victims are killed by an intimate partner.  In the 2009-2010 fiscal year, the Pee Dee Coalition assisted 970 victims of domestic violence; during the same year, they sheltered 168 women and children for a total 5,941 nights of shelter.

Derek Turner, a student coordinator of events, discussed his excitement about this year’s activities.

“I am really looking forward to this year’s ‘The Vagina Monologues’ as I believe it will cause an impressive impact on how people from our community will start to look out at the world through a different view, and maybe one day look out at a different and better world,” Turner said. “The fact is that we are but one cell of a global movement, but like all groups, we spread and grow. Hopefully, by our ever-growing status, we will be able to destroy the patriarchal views and mindsets that have been holding onto the norms from the eighteen and nineteen hundreds and welcome them into the twenty-first century with an open-mind and a gracious heart!”

Lavon Davis, a junior majoring in English, said that he enjoyed last year’s performance of “The Vagina Monologues” and plans to see it again this year.

“I loved it!” Davis said. “That’s why I’m going back again. And I’m going to try to bring my mom this year because she was really interested when I was explaining what it is.”

Larsen also said that the turnout last year was great and over $5000 dollars was raised for the Pee Dee Coalition.

In one of the first events before the actual week of V-Week, a poetry slam took place on Thursday, March 24 at Aroma Underground.

Senior English major Jessica Upchurch, who helped organize the event, explained that the theme of the event was “poetry that shines a positive light on love … love of the self, love of a family member, love of a friend – not necessarily romantic love.”

At the event Larsen played the guitar and sang in between readings of poems.  Kimberly Turner, a recent graduate of FMU, read poetry by Pablo Neruda, e.e. cummings, and some of her own work.  English Instructor Lisa Stuchell, who helped coordinate V-Week events, also read some of her own poetry.  FMU student Eleni Gotter sang a song about the fairy tale aspect of love a capella.  Other members of the audience also came to the stage to read poetry at the event, including works by Sylvia Plath, Rod McKuen and Wendy Cope.

V-Week events officially started on Monday, March 28 with the showing of the film “Until the Violence Stops.”  The film is a documentary in which Eve Ensler explains how “The Vagina Monologues” grew into the international V-Day movement. After the film, the Clothesline Project began.

The Clothesline Project, which will take place every day during the week, is geared towards recognizing the issue of violence against women and “airing out dirty laundry” by decorating a T-shirt.  White T-shirts and different colored markers are provided for students to decorate as a tangible exhibit of testimonies against violence.  Each color marker represents a different form of abuse and whether the victim survived or not.

On Tuesday, March 29, a “Manswers” panel took place.  The panel consisted of six individuals who answered questions to help each sex gain a better understanding of both the opposite sex and the same sex.

“The purpose of ‘Manswers’ is to develop, renew, strengthen and encourage relationships, varying from acquaintances to friendships to siblings to partners in life, between opposite sexes, as well as the same sex, to provide a better understanding of one another causing a unity amongst the community,” Turner said.

“BAD will include events such as yoga, belly dancing, meditation, and informational booths, such as Tell Them! and the Naomi Project,” Turner said.

Tell Them! advocates age-appropriate reproductive health education for South Carolinians in order to prevent unintended pregnancies.  The Naomi Project is a resource for pregnant and newly-parenting women.

Students do not need to sign up in advance to participate; they can refer to schedules posted around campus and attend what they choose.

On Thursday, March 31, the Gender Studies Program is sponsoring a panel, “SEXploitation and the Cyber-Scene” in Lowrimore Auditorium at 3:45 p.m.

The Red Tent is a place for people to sit, relax, reflect, meditate and discuss how they feel in a non-threatening and non-judgmental environment.

On Saturday, April 2, a self-defense workshop for women, sponsored by the Pee Dee Coalition, will take place all day in the Palmetto Room of the Ervin Dining Hall.

T-shirts with this year’s theme have been sold all week.  The shirts, available in either blue or red, cost $10, and all proceeds go to the Pee Dee Coalition.

In addition to these events, collections for Durant’s Children’s Center have been and will continue to be taken at the Richardson Center for the Child every day during the week.

“V-Week events, as a whole, should cause individuals to review how they treat, regard and act towards one another as well as themselves and re-evaluate these actions into a more cultivated and positive atmosphere,” Turner said.