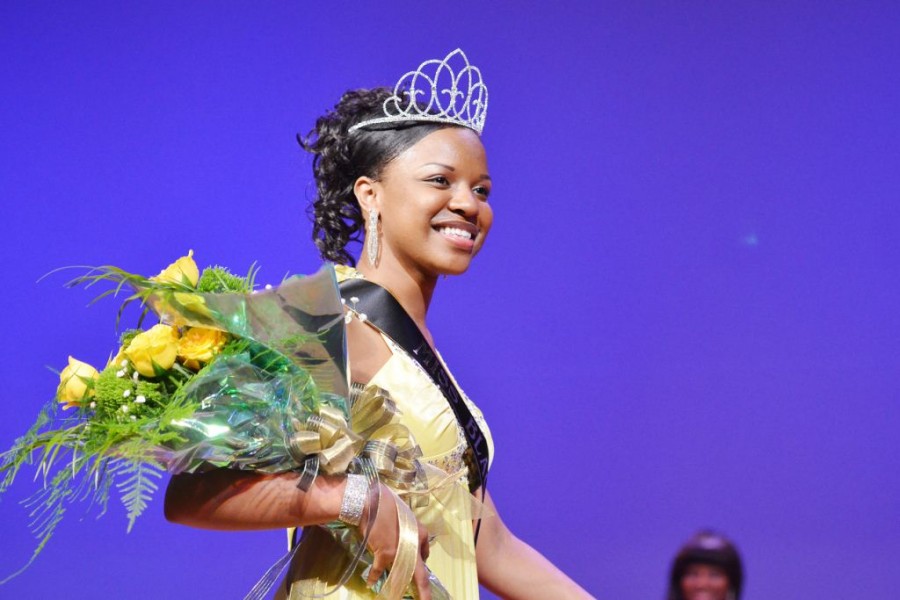 “As Ms. Black and Gold, I want young ladies to know they don’t have to be half-dressed to gain respect,” Graham said.

Graham will continue in the pageant competition and represent FMU’s Kappa Chi Chapter of Alpha Phi Alpha in Columbia, S.C.

After two weeks of practice, the contestants presented themselves for the swimwear, talent, formal wear, and question-and-answer portions of the competition.

They also individually interviewed with the judges prior to the pageant to gain points added to their overall GPA (the method the judges used to score the contestants).

The pageant opened with a choreographed dance during which the contestants introduced themselves.

The talent showcase featured songs and spoken word performances, as well as dances.

Middleton, a sophomore Psychology major, offered some advice for anyone who would like to get involved next year.

“Study the questions! Whatever you do, prepare early and get confident in yourself,” Middleton said.

Ash’Shakirah Wright, another pageant contestant, also had some words of advice.

This year’s pageant fell on “Alpha Week.” This week is full of events that Alpha Phi Alpha fraternity hosts, including “Bowling with the Alpha’s” and a highway clean-up. The week concluded with the March of Dimes walk.

“The Kappa Chi Chapter has become well known throughout the community for our great performance in the Ms. Black and Gold Pageant,” junior health physics major Josh Demalo, who is also a member of Alpha Phi Alpha, said.

The fraternity promotes scholarship, which, according to fraternity member  and senior science major JerJuan Kenney-Page, is “one of the reasons why we do this pageant.”

The proceeds from the night’s events are contributed to the scholarship that Ms. Black and Gold is to receive.

To get involved in the Ms. Black and Gold pageant, a student must have a good GPA and a good standing within the community.

Graham, Middleton and Wright all agreed that participating in the pageant was not all about winning, but also about creating lasting friendships.