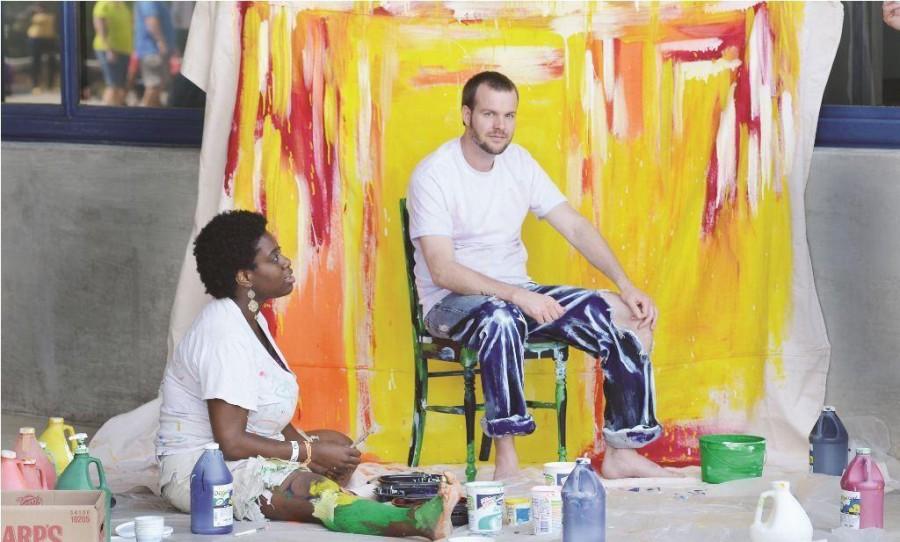 Arts International, an event hosted by Francis Marion University, brought thousands of people to the campus to enjoy the visual and performing arts, as well as cultures from other countries.

“It was a wonderful day with lots of different shows,” Oscar Betancur, a teacher at Williams Middle School, said. “You could share the experience with the kids. All the members of the family could enjoy it.”

Arts International came out of two separate events, FMU’s Arts Alive and the Pee Dee International Festival, joining together. This is the second year the joint venture has happened.

“It really is wonderful; everyone is happy,” Kathy Johnson, one of the organizers, said. “You can go around the world in a day.”

The international stage, which drew crowds in the hundreds, hosted acts from Japan, Hawaii, Latin America and Germany.

“The audiences were all very nice to us,” Mayuko Ishikura, a Japanese Taiko drummer, said. “Many donated to the relief effort in Japan. There were some very kind and generous donations.”

Chief Kamu’s Fire and Hula Show, one of the last acts of the day, featured Kamu lighting a torch from fire in his mouth.

The Food Court, which had food from 13 different countries and a Beer Garden, was one of the most popular venues.

“My favorite part was the food,” early children’s education and arts education senior Holly Todd said. “I’ve tried it all.”

One of the aims of the festival was to bring the arts to the community, and particularly children.

“We went to the Big Draw in the United Kingdom,” arts education senior Amber Hekman said. “We took ideas from the activities there and brought them back to FMU.”

Classic family favorites, such as face painting and balloon sculptures, were supplemented by activities like art swaps, making a family crest and carnival mirror self-portraits.

“It’s been a really great turn out, with more people than last year,” Hekman said. “We’ve had a lot of volunteers.”

The pavement behind the Hyman Fine Arts Center was covered in chalk drawings.

Some of the drawings were original designs, while others sourced their inspiration from popular culture, such as Finding Nemo and Pokemon.

“I want to take it home, but can’t,” Rachel Tetertiller, who placed first in the family division, said. “I love Arts International. The arts should be supported more than they are.”

The Fine Arts Center also featured recitals from a variety of choirs, opera singers and bands.

Students from FMU performed International One-Act plays on both the days leading up to the festival and on the day itself. The first play, “Señora Tortuga,” used wisdom tales from Mexican culture to give a family hope. The second play brought three Japanese folk tales to the stage. Both plays focused on engaging children in the theatre.

The University of South Carolina Dance Company performed a variety of different dances, including classical ballet and hip-hop, in the Chapman Auditorium.

“I think it went well,” ballerina Mindy Chester said. “It was fun to perform in front of the kids. It is about community; I like that.”

“It is fun to do a performance away from our usual venue – it makes it special,” Artistic Director of the USC Dance Company Professor Susan Anderson said.

Several of the festival goers and some of the volunteers running the stalls commented that Arts International was too spread out, and they would have like it not to have been separated by the McNair Science Building, as the crowds tended to congregate on one side and leave the other relatively empty.

The Smith University Center housed a conglomeration of stalls. The Global Village provided educational displays about the history, heritage and culture of other nations.

The International Bazaar had arts, crafts and jewellery from places such as Peru, Russia and South Carolina for sale.

Our Corporate World showcased world-class businesses that operate in the Pee-Dee region.

“I hope the festival keeps going,” Drinks Small, who has been described as South Carolina’s blues doctor, said. “A lot of people have never been out of South Carolina and it’s brought the world to them. They have had had a good time and been able to mingle with all ages. That means a lot.”