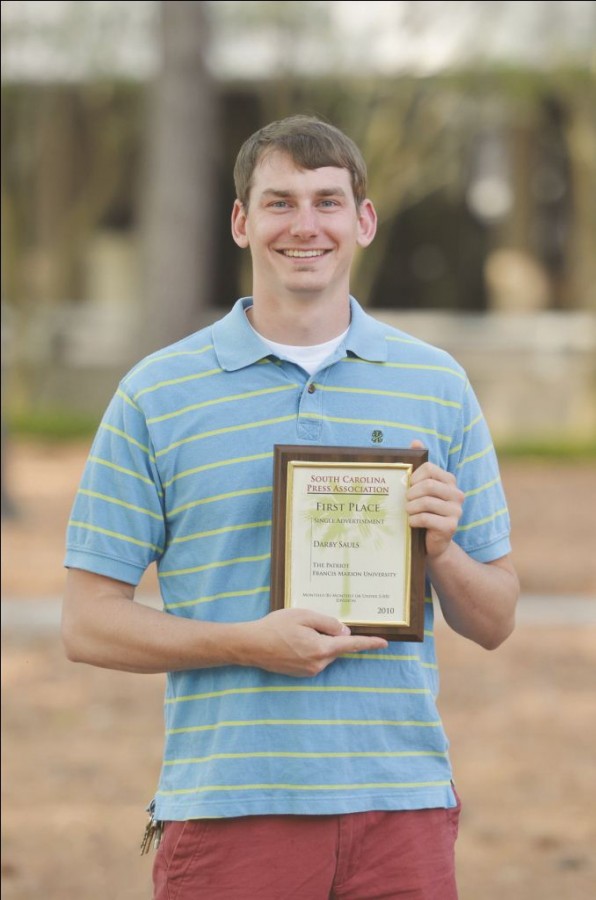 “This is one of the hardest working editorial teams that has ever edited The Patriot,” Patriot Adviser and Associate Professor of Mass Communication David Sacash said. “Key to the success of the newspaper are Editor Parker and Assistant Editor Staci Poston. While I provide editorial guidance, the success of the newspaper goes to the student staff.  They deserve all the praise and congratulations. I’m very proud of The Patriot staff.”

The awards were presented last week at the SCPA’s annual Collegiate Meeting and Awards program, which was held at Winthrop University this year.

The Patriot received first place in its class for the best single advertisement that was designed by Layout Editor Darby Sauls for University Books. Sauls is a junior majoring in visual communications. This has been his second year working for The Patriot.

“I was pleased to hear of my recognition at the awards program,” Sauls said. “The Patriot’s editing staff has sacrificed numerous weekends to make this publication successful, so it’s nice to see the hard work pay off.”

Sacash said that the advertising award was a first for The Patriot. In the last four years,  14 of the 15 awards the student newspaper won were awarded to the news staff.

Patriot Editor Brittany Parker won second place in the competition for best front page layout and design for her work on the Oct. 20, 2010 issue. Parker is a senior majoring in Mass Communication and English.

Copy Editor Hunter Deas won second place in the news story category for his article entitled “Safety concerns lead to hold on Mexico exchange program” that ran in the Nov. 3, 2010 issue. Deas is a graduating senior majoring in history. The 2010-2011 school year was his first working for The Patriot.

“I was pleasantly surprised,” Deas said. “I hoped I would win something when I submitted a few articles for the contest, but there’s always a lot of competition with that sort of thing. It was really nice to get that kind of feedback about my work over the past year.”

Editorial Cartoonist David Doughty won third place in the best humorous illustration or cartoon category. The winning comic ran in the Sept. 22, 2010 issue and was about dining hall policies. Doughty, who was also new to the newspaper’s staff this school year, is a sophomore majoring in elementary education.

“It was my first comic for The Patriot and I tried to out-do it to impress the editors,” Doughty said. “I love the dining hall and the food that they serve, but some of the regulations towards students are a bit insane.  I had planned on making a sequel to the cartoon that involved many other weird rules, but there were just too many things to fit into just one comic strip.”

Assistant Editor Aaron Gotter took home an honorable mention in the sports photograph category for a volleyball photo that ran in the Oct. 20, 2010 issue.

“We encourage students to get involved in the newspaper,” Sacash said. “This is a way to writing, editing, layout and sales experience.”