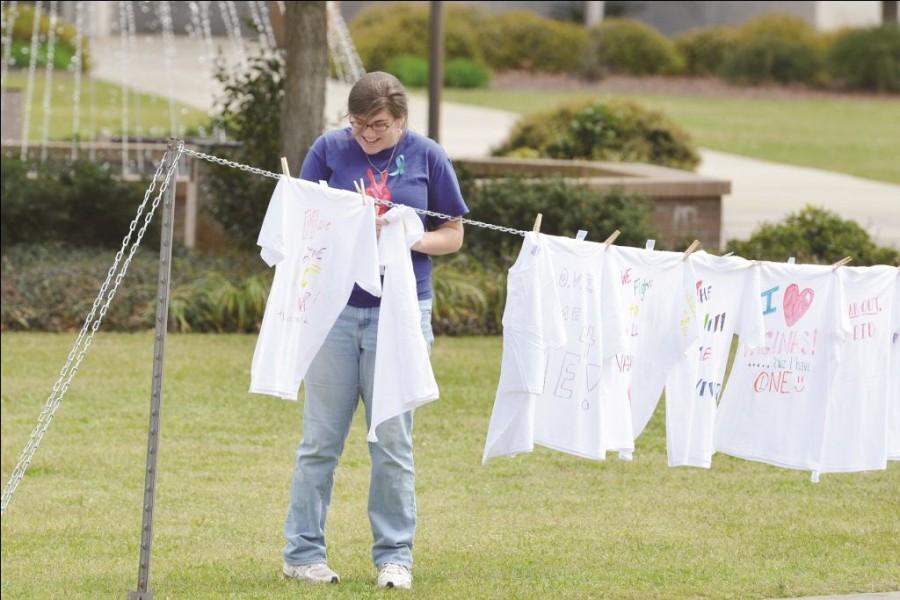 In order to make an effort to raise awareness of and bring an end to violence against women and girls, Francis Marion University recently celebrated V-Day in a week-long succession of events called V-Week.

All proceeds from events—totaling over $3,000—went to the Pee Dee Coalition Against Domestic Violence and Sexual Assault.

English Instructor Lisa Stuchell said that she was pleased with the outcome of V-Week this year and loves being involved.

“I love participating in V-Week. For me, it is something more than a committee; it is a cause,” Stuchell said. “All of us involved feel this way. We are excited to help The Pee Dee Coalition, and hopefully, as we do this, we are helping others here as well.”

V-Week culminated with a performance of Eve Ensler’s “The Vagina Monologues” on Friday, April 1.

FMU graduate Ashley Leamon, both assistant director/stage manager and cast member of the show, said that she considered this year’s performance very successful.

“The show went very well,” Leamon said. “Every year the show is different, due to an ever-changing cast and different interpretations of the monologues. This year, the cast was almost completely comprised of students, which differs from the past several years when many wonderful members of the faculty led the show to success. At least half of this year’s cast was new to the show, and the show was definitely a hit once again, which lets us know that the show can be great every year.”

Sophomore chemistry major Carrie Koski said that she attended “The Vagina Monologues” this year and thoroughly enjoyed it.

“I loved the monologue about the angry vagina; it was great last year, and I came back to see it again,” Koski said. “I also think the other parts of the show are really informative and give people lots of information that they wouldn’t normally take into consideration because most people only think of the vagina in a sexual manner.”

Leamon also commented on what she hopes people gain from attending the performance.

“I hope that our audience walks away from ‘The Vagina Monologues’ every year with a deeper understanding and an awareness of physical and emotional abuse,” Leamon said. “We aim to entertain, yes, but we also want to give this issue a voice. The men and women who have received this abuse are not victims, but survivors, and together we can work toward a common goal: the end of violence.”

Stuchell said that she was very pleased with the attendance of the performance and the sum of money that was raised.

“I am thinking that we had an amazing turnout, and we are so proud of everyone who came out to support this production and to help raise money for the Pee Dee Coalition Against Domestic Violence and Sexual Assault,” Stuchell said.

“If someone hasn’t attended the monologues before, they should absolutely go,” Leamon said. “We can guarantee laughter and tears, and all of the money we raise goes to the Pee Dee Coalition.”

“This money has recently been applied to training specialists to teach self defense classes for women,” Leamon continued. “Therefore, when you buy a ticket to the show, you could be preventing an incidence of physical abuse. That could be your sister, brother, aunt, uncle, significant other, etc. Join us, and we will push, as Eve Ensler says, ‘until the violence stops.’”

The Clothesline Project, which took place all week long, is aimed towards recognizing the issue of domestic violence and “airing out dirty laundry” by decorating and hanging out a T-shirt on a line in testimonies against violence.

Students used different colored markers, with each color representing a different form of abuse and whether the victim survived, to decorate white T-shirts. The T-shirts were displayed before the performance of “The Vagina Monologues” as well.

“The Clothesline Project is always a fun and thought-provoking event,” Stuchell said. “This year, there were poems to survivors, words of wisdom, and shirts with beautiful, artistic creations. As you walked into Chapman for ‘The Vagina Monologues,’ there was a line of shirts greeting you and reminding you that this performance is important to our community.”

“V-Week’s first art show, ‘A Woman Perfected,’ was also very successful,” Stuchell said. “Many artists participated in the event both here and at The Art Trail. In Chapman Auditorium, we also had body painting models and artists entertaining the audience prior to ‘The Vagina Monologues.’ This was a sight to see and something very special that hopefully will continue.”

Stuchell said that even though she was very pleased with the amount of participation and the money raised this year, she would always like to see more people get involved in the future, and she has high hopes for next year.

“We would love to see more students get involved and help create events and activities for this week,” Stuchell said. “While V-Week is only once a year, the message to stop the violence must continue every day and every week throughout the year.”