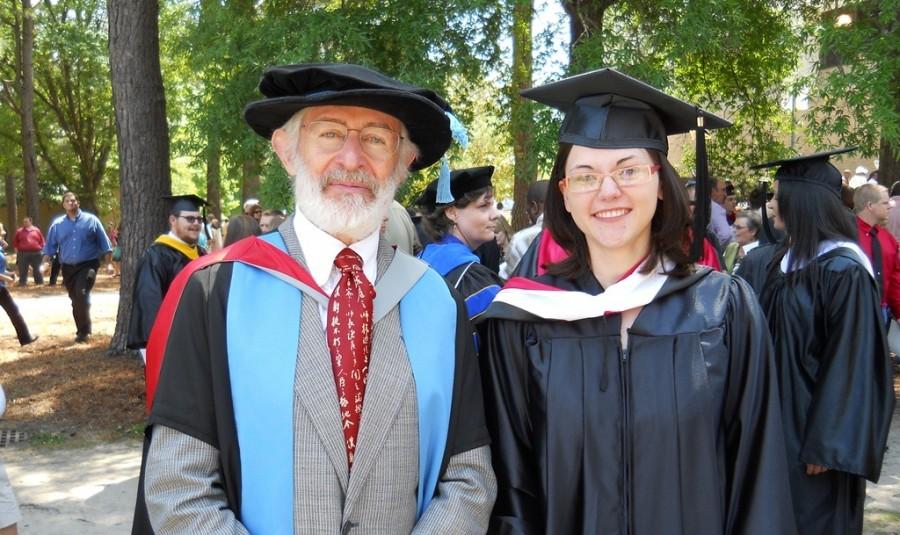 Three-hundred-and-twenty-one degrees were awarded during commencement exercises at Francis Marion University Saturday, May 7.

The William H. Blackwell Award was presented by L. Franklin Elmore, a member of the FMU Board of Trustees, to Shannon Leigh Beaudry of Dillon; Heather Elizabeth Patterson of Mullins; and Brittany Elizabeth Sanders of Johnsonville. The Blackwell Award, named in memory of the founding chairman of the FMU Foundation, is presented to the undergraduate Francis Marion University student, or students, with the highest grade point average (for all academic work undertaken at FMU) of those graduating during the past academic year.

A graduate of Dillon High School, Beaudry entered FMU in 2007. She earned a Bachelor of Arts in English with a minor in writing and language. She received the Lenna V. Morrow Memorial Scholarship for 2009 and 2010. Additionally, she received the Scholastic Achievement Award and the English Award in 2011. She is a member of the honor societies of Sigma Tau Delta and Phi Kappa Phi. She was selected to participate in the Arts and Humanities Summer Institute at the university of Delaware in 2010.

A graduate of Mullins High School Patterson entered FMU in 2006 and graduated with a Bachelor of Science in early childhood education. She earned the distinction of being named on the President’s List every semester. She received the Norma Lynch Scholarship in fall 2010 and is a member of the Phi Kappa Phi and Kappa Delta Pi honor societies.

A graduate of Johnsonville High School, Sanders entered FMU in 2006. She was named on the President’s List every semester and graduated with a Bachelor of Science in elementary education. During her student teaching at Moore Intermediate School in Florence School District One, she made such a positive impression she continued at the school as a long-term substitute.

Elmore also recognized the recipient of the Distinguished Professor Award for the 2010-11 academic year – Professor of Physics Derek W. Jokisch, who has been a member of the FMU faculty since 1999.

Hearn was elected to the S.C. Supreme Court in May of 2009, becoming its second female member in history.  She began her judicial career in 1986 when she was elected Family Court Judge for the Fifteenth Judicial Circuit, comprised of Horry and Georgetown counties.  While a family court judge, Hearn served as the first woman president of the Conference of Family Court Judges.  In 1995, she was elected to the South Carolina Court of Appeals, and was elected to be its first female Chief Judge in 1999.  During her tenure as Chief Judge, Justice Hearn served as President of the Council of Chief Judges, a nationwide network of chief judges of the intermediate courts of appeal.

Hearn began her legal career by serving as a law clerk to the Honorable J.B. Ness, Justice of the South Carolina Supreme Court.  From there, she became a trial attorney with the firm of Stevens, Stevens, Thomas, Hearn, and Hearn until her election to the family court bench.  She is married to Rep. George M. Hearn, and they have one daughter, Kathleen, a recent graduate of Wofford College.

Moore, a native of Florence and a graduate of Wilson High School, is the all-time career-scoring leader for women’s college basketball. Between 1975 and 1979, the four-time All-American scored 4,061 points.  For 11 years, she held the scoring record for both men and women.

She has also provided a remarkable example of service to the east Florence community and the greater Pee Dee region in a myriad of ways. None is dearer to Moore’s heart than her annual week-long Girls Basketball Camp. The camp which she started in 2007 is open to girls ages seven to 17. What began with 60 participants has grown to include more than 100. The camp is designed to build character by emphasizing the core values of teamwork, caring, honesty, respect, responsibility, fun and friendship. Volunteers from the community and FMU basketball players assist Moore in facilitating the camp.

Following her career at Francis Marion, Moore went on to play two seasons in the Women’s Pro Basketball League (1979-80 with the New York Stars and 1980-81 with the St. Louis Streak), earning All-Star status in 1981. She spent one season in Venezuela.

She resides in Florence, participates in FMU’s annual Old Timers’ Game, and is employed by the U.S. Postal Service.

Porter, a native of Florence, became involved in local government early in life. He was a member of Florence City Council and the Florence City-County Airport Commission before becoming Mayor of the City of Florence from 1991-1995.

He received the B.S. in biology from the University of the South in Sewanee, Tenn. and the L.L.B. from U.S.C.’s School of Law.

Honor cords are presented to graduates who compile a minimum grade point average of 3.25 for all academic work and for a minimum of 21 hours in Honors courses.