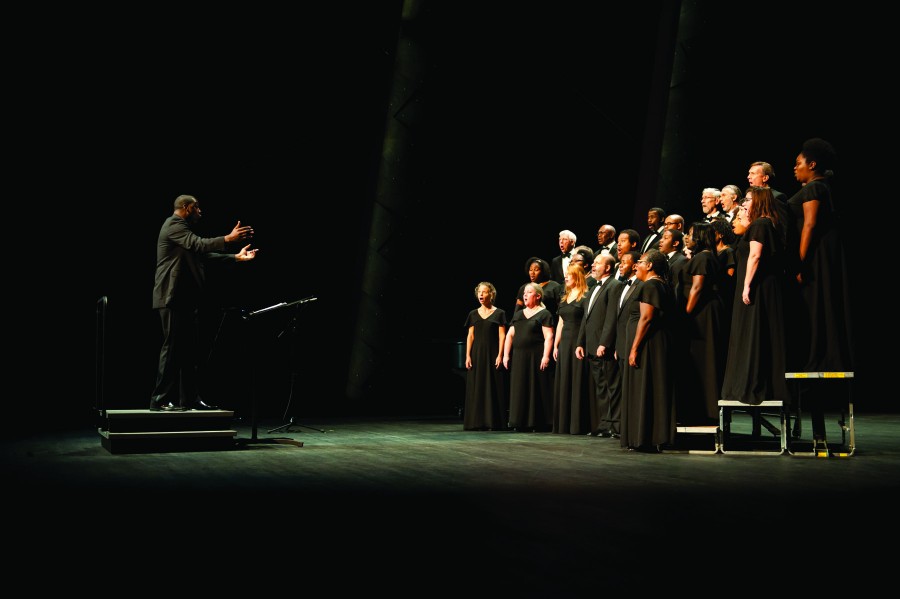 The FMU Performing Arts Center (PAC) was crowded Sunday, Sept. 11 as the Charleston Symphony Orchestra Spiritual Ensemble began their performance with a special tribute to the first responders of the 9/11 attacks.

“The excerpt is from the opera ‘Tosca’ by Giacomo Puccini,” Morzsa said. “In it, Tosca is being chased by an evil man of the police of Rome.”

According to Morzsa, the excerpt embodies the feelings that Americans felt after the Sept. 11 attacks.

“In the excerpt, she is depressed and sad about all of the things that are happening to her,” Morzsa said. “It is basically her prayer to God asking why she is being persecuted when she was good to everyone.”

After the tribute, the CSO Spiritual Ensemble started to perform their planned program,“Circa 1871: An Ode to the Fisk University Jubilee Singers.”

The concert was a collaboration of themes that Executive Producer Lee Pringle conceived. With the help of Director Nathan Nelson, selections were found to help embody those themes for this concert.

“We go through this theme of what we want, and we make it happen,” Nelson said. “We choose songs that will tell a story.”

This series focuses on the Fisk University Jubilee Singers, who were crucial to the preservation of many spirituals that the CSO Spiritual Ensemble currently sings.

Pringle and Nelson’s goal through this concert was to take the audience on a journey that is told by narration and song.

“Today’s performance is narrated by Dr. Karen Chandler, who is a professor at the College of Charleston,” Pringle said. “While she is narrating, she sets the tone, and then the choir comes full cycle with her thesis statement for each segment of the program.”

The concert featured 18 songs, including the tribute and an encore.  They were arranged in a way that they would embody both traditional and contemporary spirituals.

“We typically try to put the program in an order that it will have an emotional tug,” Pringle said.

Many songs performed featured solo singers who helped to add contrast and drama to the selections.

Soprano singer Jennifer Ancrum-Horton sang a solo during the song “If I Can Help Somebody.”Ancrum-Horton said that this song was Dr. Martin Luther King Jr.’s favorite song.

“It talks about what he embodied,” Ancrum-Horton said. “If he could help somebody as he passed along, then he felt his living would not be in vain.”

“I like that the solo has a very wide range…” Quinn said. “The song tells a great story from the Bible that everyone is familiar with, but it does it in a very impactful way.”

For the past few years, the CSO Spiritual Ensemble has been opening their season by traveling to different locations. This year they were asked to perform during the opening weekend of the FMU PAC.

“I thought that it was a fascinating opportunity for us to be part of this historical event,” Nelson said. “This meant a lot to us because this is an event that is going to be part of the city forever.”