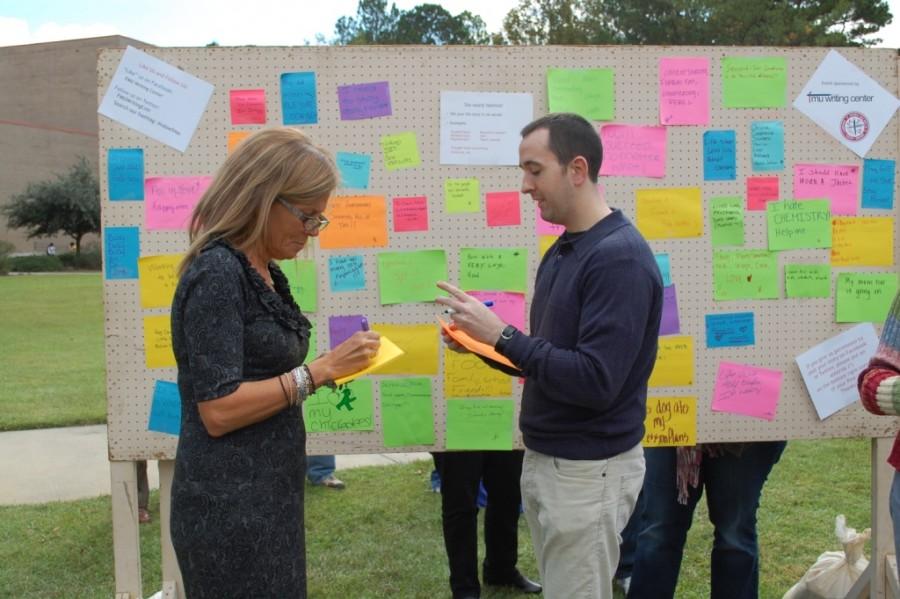 Students and professors gathered near the fountain on Thursday, Oct. 20 for the National Day on Writing’s Flash Fiction Flash Mob.

Throughout the day, Sigma Tau Delta and the FMU Writing Center encouraged people to come by the booth and show their support for writing.

For the Six Word Memoir, people anonymously summarized themselves using only six words.

One example, posted to the FMU Writing Center Facebook page, read “Mother loved the other kids more.”  Other responses varied widely, and by the end of the day, the bulletin board was covered in memoirs.

All Twit-Fic had to fit in the 140 character requirement of a Twitter post and include the hashtag of NDOWFMU for National Day on Writing – Francis Marion University.  Twit-Fic entries also produced a wide range of results from students.

One read, “When the zombies come, I’ll be ready. Samurai swords – engage! #ndowfmu.”

Flash fiction was the third option that people could choose to write on and was also the primary purpose of the flash mob which took place during lunchtime.  It began at 12:38 p.m. and lasted until 12:42 p.m.  During the four minutes, participants wrote an extremely short story on any subject.

Dr. Jennifer Kunka, director of the Writing Center, helped to organize the flash mob as well as the event as a whole.

“In talking with some of the writing center consultants and members of Sigma Tau Delta, it seemed like a flash mob would be a great way to get people outside writing and doing a fun community event to celebrate the day,” she said.

According to Kunka, about 75 people showed up for the flash mob, which she deemed to be a success.

While the U.S. Senate defines very broadly the emphasis of the day, Kunka said what the day meant overall for this campus.

“For us here at FMU, it’s a day where we can take time out and celebrate the joy of writing and realize that we do just write a lot of things in a lot of different ways: whether we write with pen and pencil, whether we write papers on the computer, whether we tweet or text,” Kunka said.

“We’ll see what else Sigma Tau Delta and the FMU Writing Center can come up with (for next year),” Kunka said.